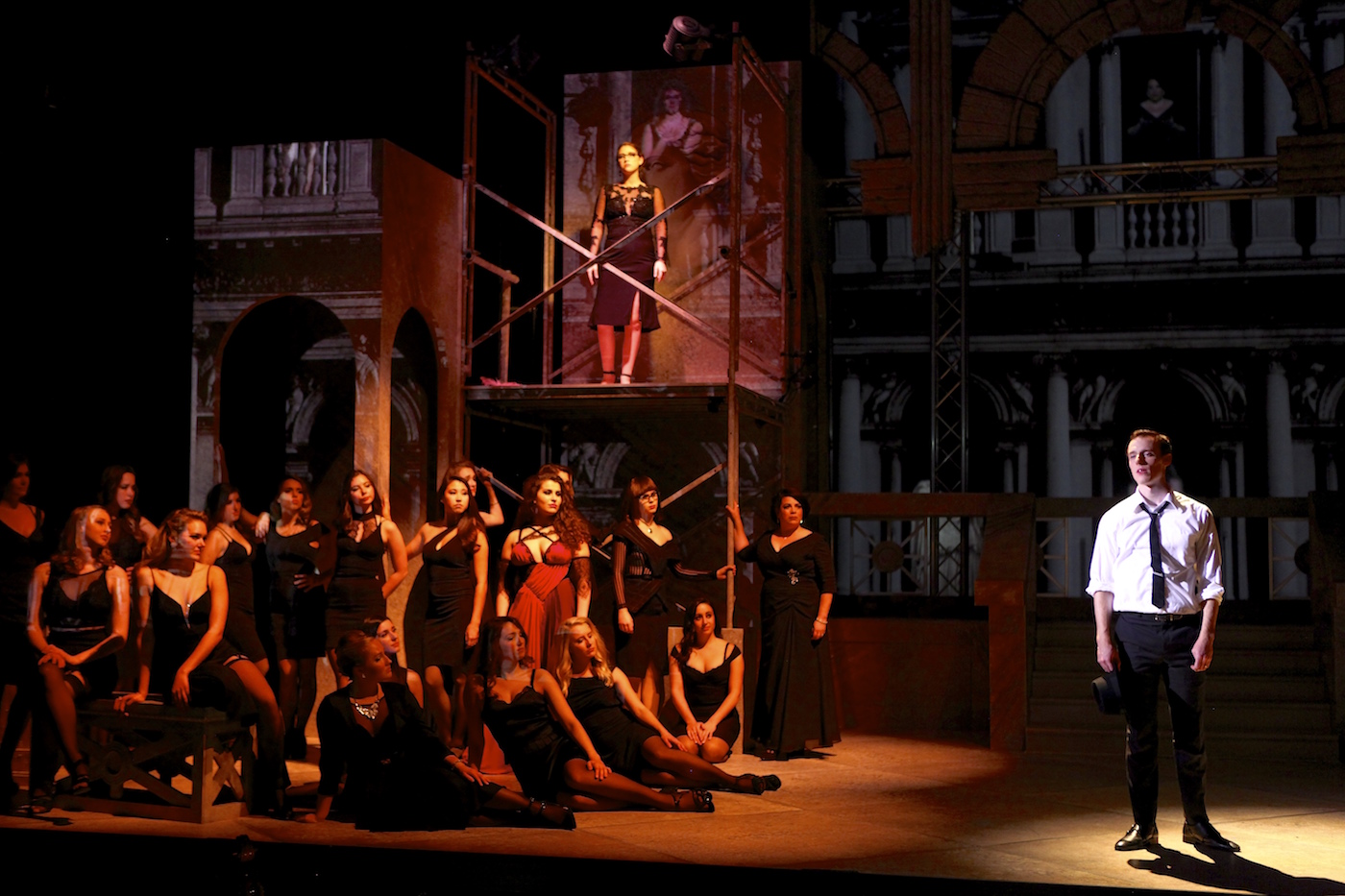 Director Federico Fellini’s 1963 movie 8½ is the most enduring work of art to be based on self-doubt and incapacity or writer’s block. When Maury Yeston (music) and Arthur Kopit (words) reshaped the original narrative as the stage musical Nine in 1982, they redefined the creative crisis of the Italian film director, here named Guido Contini, through his relationships with women.

This leads to two paradoxes. Although Guido might present himself as a shameless philanderer, Nine is a gleaming showcase for the prodigious female talent in the Syracuse University Drama Department. And in the hands of director-choreographer Anthony Salatino, Nine, a show about not being able to get it going, is one of the department’s most polished and fully realized of recent seasons.

SU Drama musicals already have a strong reputation. Going in, however, we intuit that everyone involved knew this production was a step up. It is being performed through Saturday, Oct. 8, in the larger Archbold Theatre at the Syracuse Stage complex, rather than the Storch, allowing for a pit orchestra, led by Brian Cimmet, of nine players including four strings. Felix Cochren’s large, complex set includes elements of a film soundstage, two balconies, Renaissance sculpture, and five screens by lighting designer Alex Koziaria bearing images of the live action before us. In moments of self-examination we see surf breaking on the shore, Guido’s unconscious mind. There is more to pay heed to than we can follow.

Action begins with the cascade of crises concerning Guido (Ezekiel Edmonds). He’s just turned 40, has completed eight films, and does not know how to begin his next project. The ensemble sings “Not Since Chaplin,” an allusion to the Little Tramp’s comparable frustration with City Lights. There is no comfort in his previous successes or no boost when his acclaim means he will be mobbed by adoring crowds wherever he goes.

His unhappy wife of 20 years, Luisa (Emma Roos), may leave him if he does not pay more attention to his marriage. Her first big number, “My Husband Makes Movies,” shows that she knows him better than any of the other women: “To make them he lives in a kind of dream/ In which his actions aren’t always what they seem.”

8½ and Nine are, incidentally, autobiographical fictions, not fanciful documentaries. Fellini’s real-life wife, Giulietta Masina, starred in many of his films and bears no relationship to Luisa. Further, it appears futile to link characters in the drama with persons we know from Italian film culture. There’s a picture of Sophia Loren in the program, but that does not mean she is really one of Guido’s women.

Luisa represents reality, however, as does Guido’s French producer Liliane La Fleur (Abigail Gjurich), formerly with the Folies Bergeres, who would like him to make a musical. Under Salatino’s direction the large ensemble is always a part of each dialogue, as willowy chorines at the Folies or a galloping herd of fillies in a possible spaghetti Western.

In his well-considered program notes, Salatino says, “Nine is a fusion of reality and creativity exposing the boundaries between life and art.” Thus Guido’s words can be transmuted quickly into images or motion. As compelling as this production is, especially with triple-threat singer-actor-dancer Ezekiel Edmonds’ excellent Guido, Nine is always asking the audience to think about the creative process, how the personal becomes the palpable, energies from the inner self to ascend to art.

Perhaps some of the women who speak to Guido have been conjured up while others walk in on their own two feet. His longtime mistress Carla (Tristen Buettel) is a lusty blonde who announces her presence with gymnastic energy. Her big entrance number is titled, “A Call From the Vatican,” a woman who commands attention. Always in motion, her dance proclaims her sexual promise even more than her words, a contrast with the introverted and disapproving Luisa.

Deeper in memories of Guido’s childhood are very different women. Cutting a contrasting figure is his imposing Mother (faculty member Celia Madeoy), who delivers the title number “Nine” with the ensemble. An experienced Shakespearean and an Equity player, Madeoy relishes the authority it would be difficult to ask of a student. She is also the dialect coach so the entire cast sounds as though they just came from a Milanese fashion show, elegant never caricatured.

Appearing with Mother in memory is the young Guido (Séamus Gailor), the future director in short pants. Previously seen in Syracuse Stage’s Caroline, or Change, young master Gailor joins in duets and ensemble numbers and soars in his own affecting solo, “Getting Tall.”

Meanwhile, the large cast has more dazzlers to reveal. There’s voluptuous Sarraghina (Jenna Najjar), the outcast prostitute whom young Guido asks for advice about love. Her response, “Be Italian,” is delivered with tambourines, the most flamboyantly “Fellini-esque” of many show-stoppers.

Tall, blond, willowy Claudia (Kelsey Roberts) is Guido’s muse, the star of his greatest successes, who is now unattainable. She may call him “My Casanova,” but she wants to be loved herself, not her idealization. Her second-act duet with Guido, “Unusual Way,” while infuriating him, sets him on his way.

Nine could easily be subtitled “all these lovely women,” since only two males are the most necessary. Ezekiel Edmonds has been the most favored SU Drama leading man in recent seasons for good reason. The existential, struggling artist hero calls for deep reserves of talent that he delivers. This is a role to launch a career.

As for directors, Anthony Salatino has been planning Nine for years. We see his hand in a hundred nuanced touches. In a long career here, he has never been more magnificent.