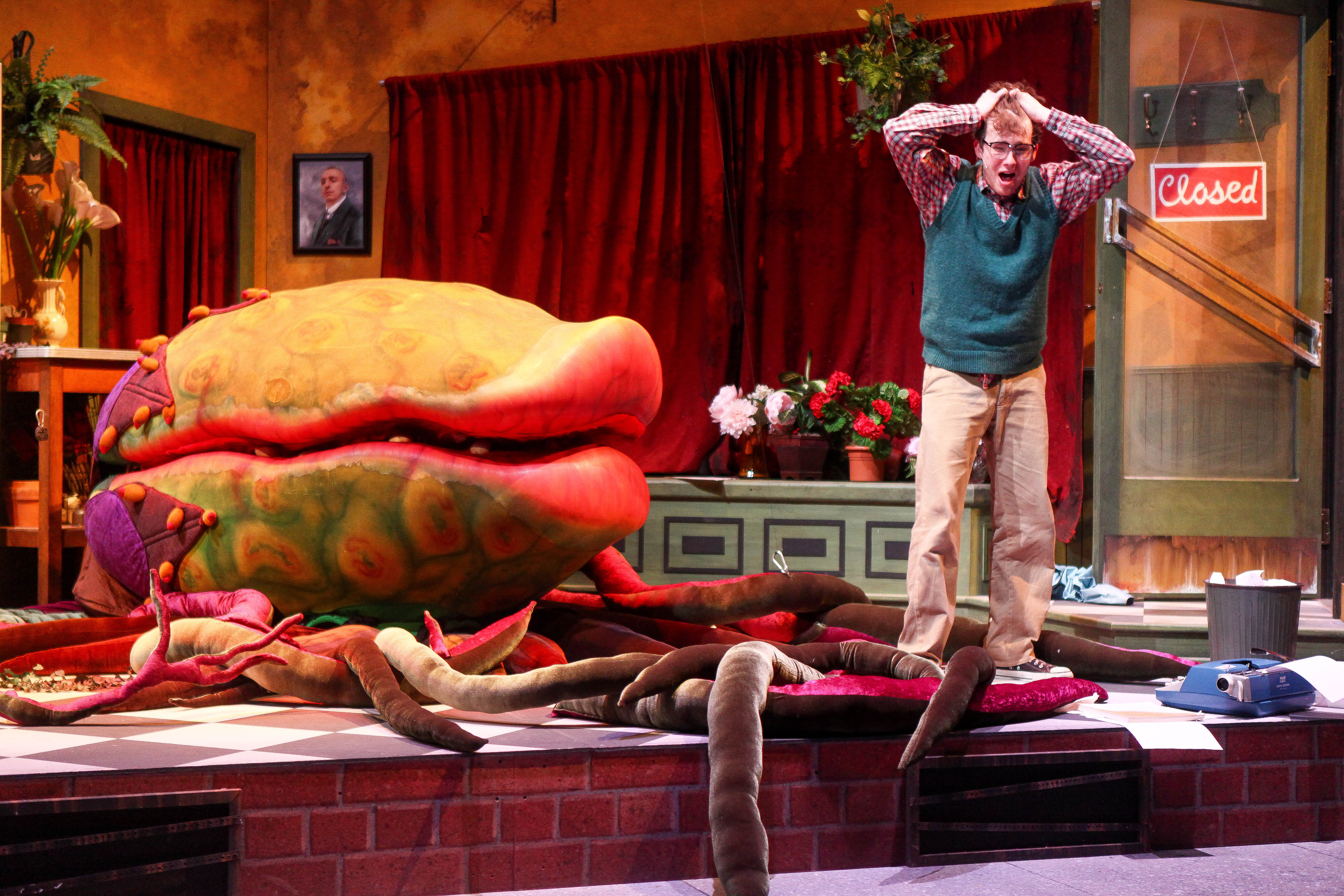 University directors have to rely on the talent that happens to be at hand, and Director Brian Cimmet has all the right people.

Howard Ashman and Alan Menken’s Little Shop of Horrors is a durable show, putatively about a carnivorous plant, that many people think they know, only they don’t. If they have seen only the bowdlerized 1986 movie version with Rick Moranis, they’re going to be stunned by the ending of the current production from the Syracuse University Drama Department, which runs through Saturday, May 12.

The show has the action come out the way it did in the 1982 off-Broadway hit, but not what was in Roger Corman’s original cheapie horror movie of 1960. But it is musical presentation, not plot twists, that makes this Little Shop stand apart from many others.

Director Brian Cimmet has been a frequent music director of SU Drama productions more often than being in charge of the whole shebang, so he knows how to coach a student performer into getting the maximum laugh out of a gag. More surprisingly, he extracts more theatricality from the score, not usually thought to be Little Shop’s chief assets, even with only a five-player ensemble. True, some numbers have had a life of their own, like “Somewhere That’s Green,” but even that is a mocking satire: The singer longs for the banality of a tract house.

Ashman and Menken have stated that the entire score began as a spoof, to be a darker version of Grease. Their targeted idioms are doo-wop and Motown, both fading from fashion when the musical opened. Cimmet retains the veneer of the composer and lyricist’s irony but emphasizes how the underlying emotion moves the plot.

University directors have to rely on the talent that happens to be at hand, and Cimmet has all the right people here. The street-wise Skid Row Greek chorus of Chrystal (Anju Cloud), Ronnette (Aliana Kilmer-Setrakian) and Chiffon (Brittany Adebumola) launches the action with the throbbing title number in the prologue. Even though they may momentarily re- treat to the corner of the set, they are never disposable or anonymous. Only they know all of the action, foreseeing the finale. Maria Marrero’s costumes keep pulling your eyes toward them, especially the chartreuse go-go boots at the end.

Hapless, childless Mushnik (Jacob Rosen) runs a nearly bankrupt flower shop in the poorest, most dangerous neighborhood in New York City. His two employees appear to have come from the bottom of the labor pool: hyper-nebbishy and clumsy Seymour (Ryan Byrne), who stumbles on stage at his entrance, and Betty Boop-voiced Audrey (Amber Gatlin), who arrives at work with a blackened eye. Her tormentor boyfriend is the sadistic biker-dentist Orin Scrivello (Crawford Horton). Horton also plays other roles, male and female, starting with the derelict drunk in the gutter at rise of curtain. The real Audrey looks on during a scene. (Michael Davis/Syracuse New Times)

Because Seymour suffers unrequited love for Audrey and also discovers the mysterious blood-craving plant, which he names Audrey II, they are often perceived as the leads. Byrne has the first solo, “Grow for Me,” encouraging the mystery plant to both save the flower shop and drive the tension. Another Audrey solo is the aforementioned “Somewhere That’s Green,” which Gatlin delivers with heart-melting earnestness.

In something approaching a paradox, both Byrne and Gatlin sketch out the comic dimensions of their characters with stylized movement yet they never short the characters’ emotional lives. This tension between snicker and deep feeling, which Cimmet has cultivated, is one of Little Shop’s many allures.

What’s new in this production is the casting of tall, follicle-challenged Jacob Rosen as Mushnik. Ordinarily this role is the least of the four principals. Further, playing characters twice their age is often a hardship for undergraduate performers. Only a sophomore, Rosen has already mastered expressive body movement, in this case something approaching arthritic despair. Does he really have receding hair at age 19 or has he taken a razor to his top thatch just to be right for the role?

“Mushnik and Son,” the shop owner’s big number, in which he also proclaims his loneliness and needfulness, usually carries klezmer-accented comic tones. Here it becomes a fountain of Yiddish weltschmertz, and also pushes the borders of what can be accepted in an ethnic inside joke. It also brings down the house as this number never has in any other previous Little Shop production.

The role of the bullying dentist Orin was written for scene-stealing, which is why Steve Martin played it in the 1986 movie. On stage, the role comes with about a half-dozen auxiliaries with contrasting body sets, as the invitation to show off is even greater. If Crawford Horton did not cut such a distinctive figure (tall and thin; he was the Scarecrow in December’s The Wizard of Oz), we might have been fooled into thinking a different actor was popping up each time. He also pulls off the delicate tonal feat of dying on stage from too much laughing gas.

SU Drama productions benefit from technical excellence that rival profession- al League of Resident Theatres standards. Thus, Alice Jüngling’s inside management of a huge, fearsome puppet and Jack Fortin’s voice work as the plant are as good as you could ever get.