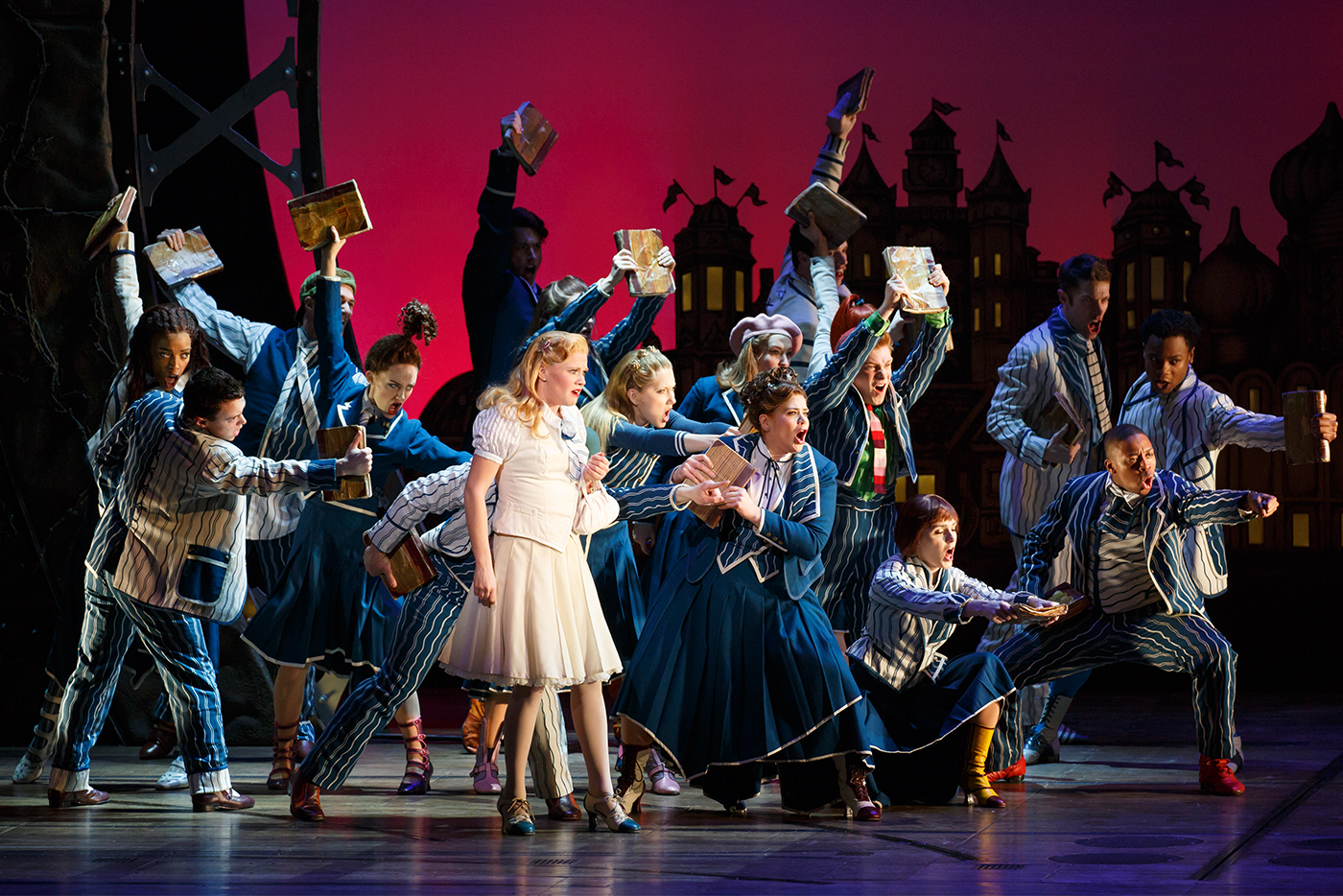 The acclaimed musical adaptation of Gregory Maguire’s Wicked, the quasi-prequel leading up to the events that took place in L. Frank Baum’s classic The Wizard of Oz, is returning to the Landmark Theatre, 362 S. Salina St., for a series of matinee and evening shows from Wednesday, March 15, through Sunday, March 26. For information, call (315) 475-7980.

The Famous Artists touring production features Lauren Haughton, a Syracuse University alumna who has been a part of the production for the past six years. This season, she is a swing member of the cast and as the understudy for Nessarose, who is known familiarly as the Wicked Witch of the East.

Spoiler alert: In terms of the novel and with the stage adaptation, the famous witch’s role is to literally bring the house down.

However, Haughton’s role as a swing proves her versatility and ability to jump into any part within the ensemble.

The Georgia-born, Chicago-based local actor performed with Wicked on Broadway before joining the show on the road. There is never a dull moment, Haughton said, and she’s happy to be back in the Salt City to grace the Landmark’s stage again.

You’ve been performing in Wicked for a number of years. Do you have time for other endeavors?

I teach a lot in addition to performing. It’s one of my other artistic outlets. Being based in Chicago, I’ve been working with Northwestern University since 2015, choreographing for their opera department and help out during the summers with their musical theater preps program.

What’s great about teaching is that I’m able to do that between cities when we have a couple days off. I can delve into these other shows in some artistic way. Passing on musical theater knowledge to the next generation has been really fulfilling.

Also, it’s fun seeing kids discover the shows people have been doing for years and years. Musical theater is an American art form, and it’s cool to see it being passed down. We’ve all seen Oklahoma! or Grease a million times, but it’s fun to see these kids perform with a fresh interpretation.

I’ll teach master classes and others through Broadway Connections or Stage Door Connections. Or I’ll teach through Wicked; our publicity department will get requests.

Do you have any nonprofit endeavors?

We work with BC/EFA, which is Broadway Carries/Equity Fights AIDS.

I was in Wicked a couple years ago when the show came through. When I was in school, I worked at Merry-Go-Round Playhouse and Syracuse Stage. It’s going to be a homecoming of sorts.

I am excited to see all my professors in the theater department. I’ve already talked to a couple of them about sitting in on classes and simply being with the students as they are learning. I might take a ballet class while I’m there.

You’re a designated swing and an understudy for Nessarose. Will you be stepping on stage as the latter?

Sometimes we know, because some performers have vacation they have to take, but our Nessa (Kristin Martin) doesn’t have any time to take. I do go on quite a bit, because this is the time of year where people will often get sick.

What other roles have you taken on?

I used to perform one particular role in the ensemble for each performance, but I prefer swinging. Taking on different roles mixes it up and it challenges my brain and body. I know three different vocal parts. Sometimes I’ll sing as an alto, second soprano or first soprano. Some roles involve more acting and some involve more dancing. This depends on who I’m on for.

People ask me how I can do this show for so long. It’s kind of like my secret. My job is never the same, it’s always fresh, challenging and I have to stay on top of it.

Do you prefer playing antagonists or protagonists?

That’s interesting to consider, especially for Wicked. There is a good chance the audience will come in with preconceived notions of the characters. The show plays with the concepts of protagonists and antagonists. Your notions may switch when watching the show. I don’t think there are clear-cut sides, which also adds to the fun with performing in the show.

Nessarose has a smaller role, but she has quite a journey. It’s a fine line between protagonist and antagonist. The same goes for the Wizard of Oz and Madame Morrible.

When I was younger, I played a lot of ingénues. I don’t know, but it’s easier to go for those sweeter characters. But now I’m interested in playing smart antagonists. It’s really appealing, because it could be really fun to play those nasty, villainous roles.

You’ve played some other notable roles, such as Belle in Beauty and the Beast and Lola in Damn Yankees.

Yeah! I got my Equity card in Indianapolis while playing Belle (in Beauty and the Beast) and Irene in Crazy for You. I went on to perform productions of Cabaret in Chicago, and my most favorite role right after I got my card was Lola.

Before Wicked, I performed in a lot of regional theater and in principal roles. I grew a lot in those years. Although the audiences aren’t as large and the runs aren’t as long, it’s the opportunity to play those roles every night. Especially with Lola, I learned a lot about comedy. I look forward to one day returning to regional theater.

When you are prepping for a particular role that’s been pulled from literature or another art form, do you research the role?

This is going to sound horrible, but I’ve never read Wicked. (Laughs.) I really should, but we get so much Wicked at work. To read it, I think, would be a lot.

When playing a particular character in Wicked or other shows, do you pull from the past performances of other actors or do you make it your own?

When I’ve done processes of new shows. I’ve done a couple out-of-town tryouts before, where we’re developing new shows in the room, one I’ve done with Tommy Tune and another out at the Old Globe Theatre. You’re creating in the moment.

When performing in revivals or shows that already exist, I’m a firm believer in knowing where you’re coming from to go forward. The Lincoln Center Library has archives of shows and people who have played certain roles. In terms of playing Lola, Bebe Neuwirth did it in the 1990s, and Gwen Verdon was in the film. I’ve seen the performances, but I haven’t studied or copied them. You have to know the essence they brought to Lola before you bring yourself into it.

Especially with Wicked, because it’s been around for so long, I don’t think anyone can copy what Kristin Chenoweth did. It’s good to know how she did it and honor it, but go for it and do it in your way.

The big thing about being an understudy that I learned, I have to be in the right number and place. I can’t make up my own staging or blocking and say the line. It’s very mechanical in that way, but my point of view is how Lauren Haughton will play this role. It’s a tricky line, but you can’t be someone else.

Any pre-show or post-show superstitions?

I’m a huge yogi, so my warm-ups consist of yoga. I just wake up in the morning and immediately start to vocalize. It’s part of who I’ve become after performing in professional shows since 17. I just wake up and judge where my voice is.

Our crew that travels with us, especially in Emerald City, there is a lot going on. There are bikes on stage and things flying around. With a couple of the tracks I cover, there will be a fist bump in-between everything going on as a check-in amid all the craziness going on. It’s a lot of fun.

Are there any updates in this year’s show?

Since the last time we were here, there is flying in the show. Elphaba puts a spell on the students in a classroom scene, and we’ve added a couple flying characters in that. And our choreographer is always brushing things up. There are a lot of little things to make it fresh.

What can people expect?

I don’t like to talk about politics, but with the election and everything, this show hits close to home right now. Everything that went down in the weird political year we’ve had, no matter where you stand on things, it makes light of it in a very fun way.

It’s also great to see a female-focused story about friendship. It breaks away from the “boy meets girl and they fall in love” mold.

I think anyone who is a Wizard of Oz fan, and there will be those people coming back for a second or third time, it’s always fun to discover Wicked. It’s great to see the references to the story and see the characters before we got to know them. Referencing the title, you’ll question who is actually wicked.