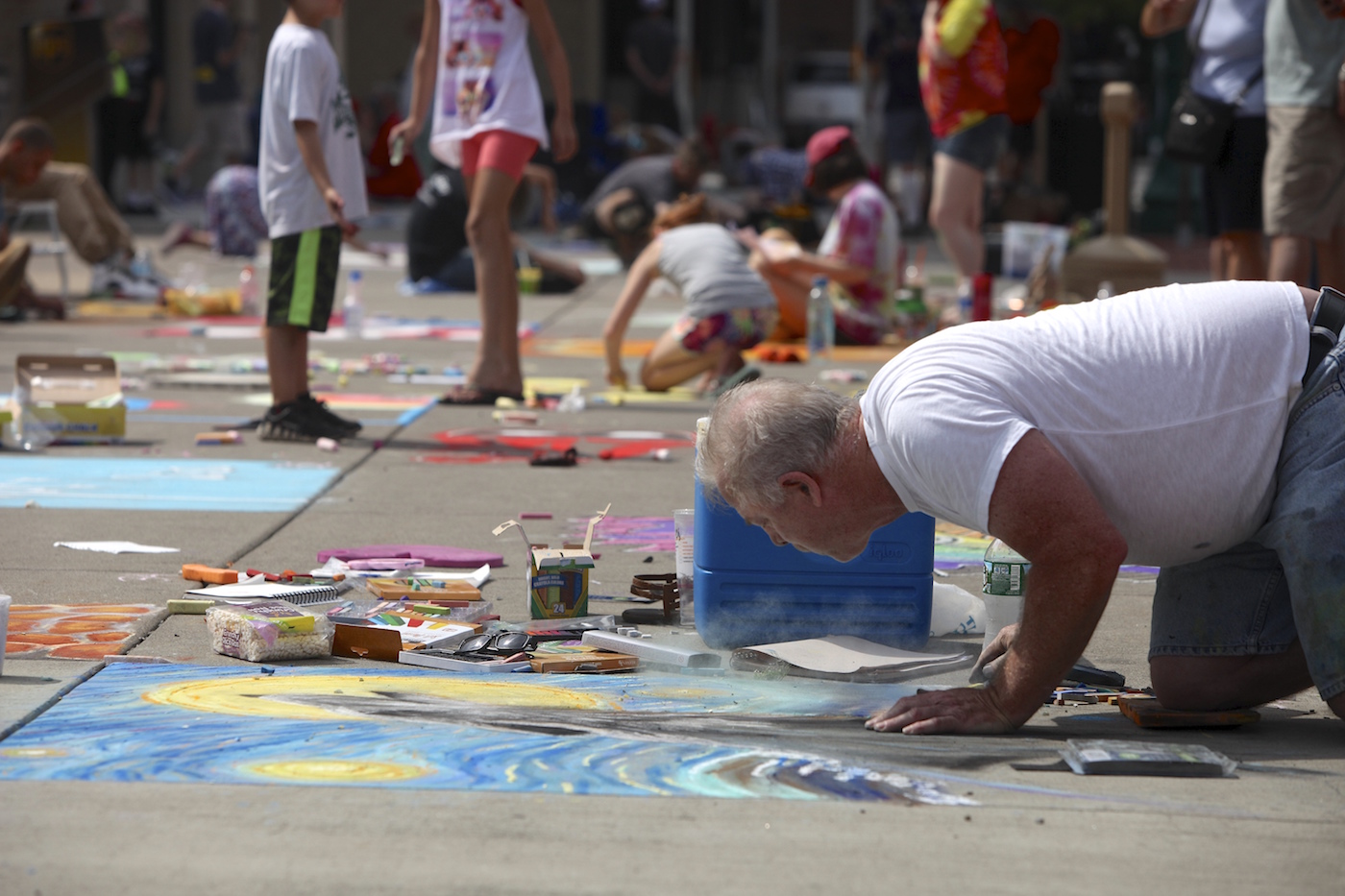 The sidewalks came alive during the most successful Street Painting Fest yet.

The looming Central New York gray sky did not deter attendees from participating in the July 30 Syracuse New Times and Family Times Street Painting contest. The 26th annual edition welcomed 70 participants, artists of all ages and skill levels to decorate the sidewalks across from City Hall.

As new additions to Street Painting’s contribution for downtown Syracuse’s Arts Week, there were more attractions for the 2016 showcase. Coco the Clown and her cohorts painted onto the faces of kids and adults, with butterflies, crawling dinosaurs, full face paintings and more. The Via Napoli Express food truck satisfied hunger pangs with its wood-fired pizzas.

On the other end of the Montgomery Street-block, the addition of a dunk tank lured ArtsWeek patrons to shell out $1 per throw to raise money for Wanderers’ Rest Humane Association. Several community stalwarts perched atop the tank to face the big dip, including Kristin Earle (Cystic Fibrosis Foundation of Central New York), Mike Intaglietta (Landmark Theatre), Paul Colabufo (Believe in Syracuse and Turbo Bocce) and Brian Cocca (Syracuse Trivia Company and Happenings CNY). Their efforts helped raise $228 for the animal rescue.

The artists were not afraid to get immersed in their work. Some walked away clean or with a little paint on their hands. Others were covered head to toe in chalk dust.

Fulton’s Jerrod Hawkes, who works in wood crafting to showcase his artistic expression, used a skull as the inspiration for his pavement square. The drawing displayed darker tones and various shades from light gray to black. The background, however, was blue and purple, with yellow and orange glitter sprinkled atop the skull to represent optimism.

“A skull is normally associated with death, danger and destruction,” Hawkes commented. His use of bright colors offset the ominous appearance. Hawkes added that if something negative exists, the polar opposite is also evident, even though we may not see it.

The rest of the squares featured vibrant creations: various animals, a man who celebrated his anniversary with a drawing of his wife, a page-to-concrete homage to pop artist Roy Lichtenstein, and Bernie Sanders with Pikachu.

Hailey Terchowitz of Syracuse took the People’s Choice Award and second in the teen category, her first wins in the three years she’s participated. Her picture of a pup with a floral crown was eye-catching; she said that animals often serve as her inspiration.

She also admires the works of painter Bob Ross. “He said even if you make a mistake, a picture can still turn out beautiful.”

Two sisters named Clubine were doubly victorious. Kayli Clubine won first place in the teen contest, while younger sibling Sabrina took second place in the youth category. Along with their father Tony, they made this a family outing.

“The family is talented,” the proud papa said modestly. Sabrina went with an aesthetically brilliant pattern, and Kayli drew nose-to-nose giraffes. “The important thing is we just have fun.”

View a photo gallery of the event here, and video here.

And the winners are…