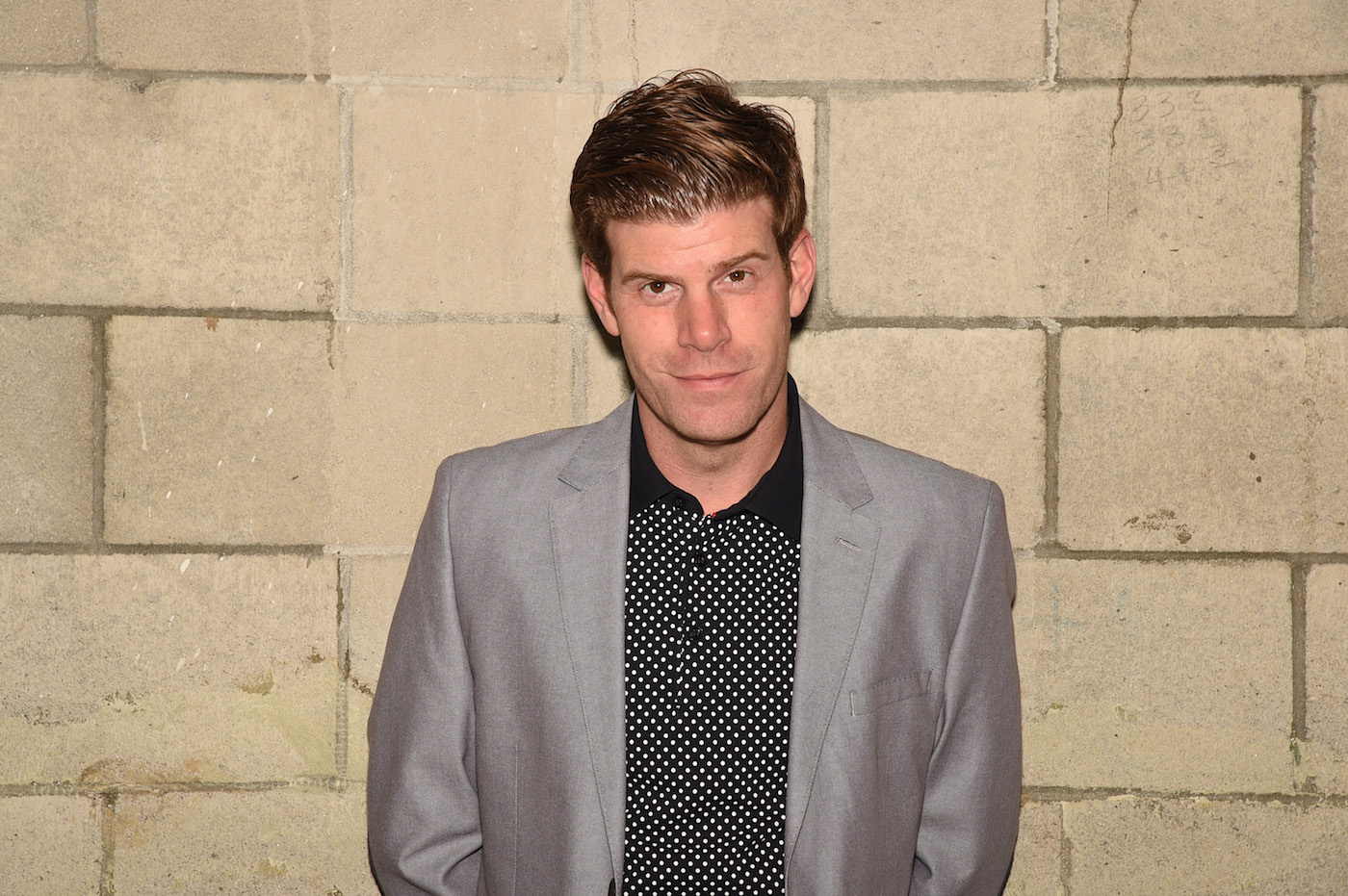 Former star of FX’s ‘The League’ comes to Funny Bone for a good cause.

Actor, writer and comedian Steve Rannazzisi came onto the scene in the early 2000s, specifically on the MTV prank show Punk’d. Then came appearances in the films For Your Consideration and Paul Blart: Mall Cop, the acclaimed web series Daddy Knows Best and his notable role as Kevin on FX’s The League.

The Smithtown, N.Y., native and SUNY Oneonta graduate will be featured in a one-night special event at Funny Bone Comedy Club at Destiny USA on Tuesday, Dec. 27, 7:30 p.m. Tickets can be purchased for $20. The show is a partial benefit for Devan Whitaker, a Central New Yorker and family friend of the comedian, to help defray the costs of hospital bills following a motorcycle accident.

During a telephone chat with the lively Rannazzisi, the Los Angeles resident, husband and father of two talked about his love for volunteer work, writing, standup comedy and upcoming projects.

Do you miss the snow at all?

Yeah, I heard you guys are getting beat up. I know Buffalo is getting hit badly this weekend, too. I was in Chicago last weekend, and they got about 10 inches of snow. It’s not fun.

I’m in Los Angeles, and we moved out here in 2001. I still have a place in New York, and we go out there fairly often, for the holidays and a little time over the summer.

How often do you tour?

I usually go out two weekends a month. I call them “tours,” but I break them off into seasons, fall-winter, and take a little more time off in the spring and summer. It’s not a string or a two-month run. I’ll do pop-in 15-minute spots when I’m in town, but when I go out on the weekends I’ll perform four or five hour-long shows.

Tell me about the Funny Bone benefit show.

It’s actually for a family friend. My sister is married to this wonderful man, who is from upstate and around the Syracuse area. His best friend (Whitaker) was riding his motorcycle into work one morning, and he was accidentally hit by an elderly man who didn’t see him coming. He has severe brain trauma, and it’s been a tough, uphill battle for him. Whitaker hasn’t been able to work, so it’s been a problem providing for his family and paying the medical bills.

I know there are a lot of accidents that happen every day, but this is a really great person I know personally. If there was anything I could do to help them, I was going to try.

I know it’s a tough night, falling between Christmas and New Year’s, but I hope people can make it out. It’s for a great cause for a wonderful person. We can use all the help they can get.

Do you perform at other benefits?

I do and have before. There are big causes where groups of comedians get together. I’ve worked with this organization called Everyday Heroes. They take care of sick children with cancer for the most part. Los Angeles has a great children’s cancer hospital.

I’ve performed with St. Jude’s Children’s Hospital, too. I’ve played in celebrity golf tournaments and performed standup. If you haven’t been down to St. Jude’s in Memphis, it’s really a magical place. God forbid if you ever come across a situation where your child gets sick, that is a place where you’d want to be. Not only do they take care of your child, they take care of you and your family.

You also have a new movie Avengers of Justice: Farce Wars coming out.

It’s an independent movie shot in Louisiana this past September. It’s essentially a live-action The Incredibles, a family movie and silly superhero spoof. You’re not going to learn anything too crazy from it. A guy who had superpowers and hasn’t used them in a while feels he doesn’t need them anymore. Then, my archenemy comes to destroy the planet. My character then has to defend himself and his family and try to get his superpowers back.

I had a blast doing it. I’ve never done an action movie before: stunt and fight sequences, and I got to fly in the movie. It’s silly, but I’m looking forward to when it comes out.

I’m also writing a half-hour sitcom for Comedy Central and recently filmed an episode for Curb Your Enthusiasm.

Is improvisational comedy part of your background?

When I started studying standup and moved to Los Angeles, I wanted to perform improv as well. I took classes at The Groundlings up into the writing labs, which is where I got my improv and sketch background.

For The League we worked off an outline and episode structure, but we improvised the lines. Getting to work with those guys, some of the best improvisers in the world, that was like a seven-year master class.

Along with having done Curb Your Enthusiasm and the Christopher Guest movie For Your Consideration, as an improviser, it doesn’t get much better than that. For Your Consideration came out about 10 years ago. They shot the whole movie, screened it and then wanted to have a cold opening. Guest then wrote a scene before the credits even came out, where Catherine O’Hara’s character gets stopped at the studio gate. She’s a big star and shouldn’t be stopped at the gate, but I’m the guy who stops her.

Eugene Levy, O’Hara and Guest on set: I got to eat lunch and spend an hour with them. It was a memorable experience.

What did you study at SUNY Oneonta? Were you involved in the performing arts?

I did participate in the Mask and Hammer Theatre Club, but I did get my degree in communications.

What helped push you into the comedy and writing scene?

At school I got to perform a lot. I was in all the plays, and I’d perform show-to-show. I moved to New York City, and as an actor you don’t get that opportunity. I had always been interested in standup, and I’d written some jokes. I tried an open mike night, which was terrifying, but I enjoyed going up on stage and being myself instead of a character.

When I moved out to Los Angeles, I got a job at the Comedy Store. I was there every night performing or working, and the experience was invaluable.

Did you find it easier to write based from experience?

I’m an observational guy. I like telling stories, and I’ll weave jokes into them and go on tangents. They’re personal to me, so I don’t have to worry about whether or not someone told the same type of joke. I’m usually the butt of my jokes. Self-loathing is a key element.

Is performing in your blood?

No. My parents owned a limousine service. Being in customer service helped me learn how to talk to people. Both of my parents have big personalities. My mom’s a very funny lady, and my dad is a big talker. My sister is a special education teacher, and my brother is a Roman Catholic priest, a very good one. And I tell dick jokes to strangers at night. We have, in our own way, our own form of performing.

What makes a good priest?

He’s a great communicator, empathetic and not judgmental. Growing up, I went to Catholic school, and there weren’t too many people who really made the effort to understand what others are going through. My brother makes an effort and has a good heart.

Is religion still a big part of your life?

Not as big as my brother. I’ve kind of fallen off the wagon a little bit. I believe in God and still have a faith, but it’s not as laid out as the Roman Catholic faith is.

Your Daddy Knows Best web series is always fun to revisit. Do you have any online projects or podcasts in the works?

We’re trying to turn Daddy Knows Best into a television series. That character can be really fun in that world.

In the new year, I’ll be starting a new podcast called Hear Me This Book with Steve Rannazzisi. I haven’t read a bunch of books I should have read. Most people have that book where they say to others, “I can’t believe you haven’t read this” or “How did you make it this far in life without reading this book?” On the podcast, the guest will tell me about that book, and we’ll use it as a jumping-off point for a conversation.

Comedians Bill Burr and John Caparulo have expressed their intent in creating an animated series. Why does this medium attract you?

Bill is an executive producer of his own show, and he spends a lot of time in the writing room. It’s time consuming. Even if you have a live action show, you have the writers’ room and then you have to film the whole thing.

You can have huge guest stars on animated shows, because you’re only going to borrow them for, like, an hour. There is much more ability to ask people to participate. They don’t have to get dressed up but sit in a box and say the lines into a microphone. The animators do most of the work.

You can also put animated characters in situations, where I want the character to rent a boat for the Fourth of July and blow it up with fireworks. Then the rest of the episode turns into Open Water, where the characters are trying to survive while floating on a keg. I’d never be able to film that in real life.