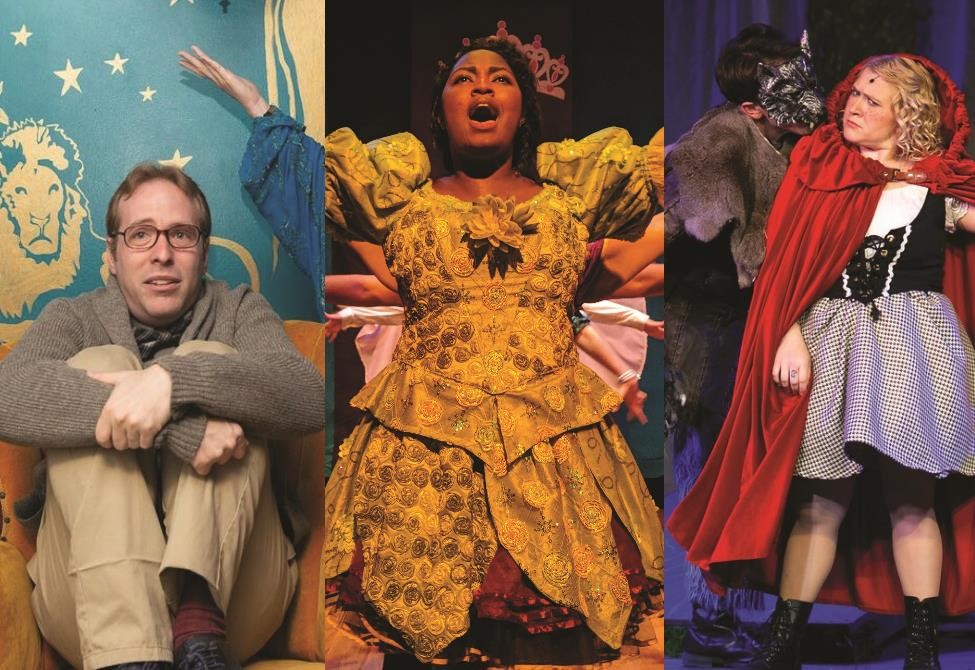 After six years of turning its bustling Shoppingtown mall venue into an audience destination, artistic director Dustin Czarny’s Central New York Playhouse continues to bring back the hits of the outfit’s previous incarnation, Not Another Theater Company. The Stephen Sondheim musical Into the Woods, first performed in May 2011 at the New York State Fair’s Empire Theater, might have been the earlier company’s biggest box office. The revival runs through Saturday, June 23.

The current space is smaller, but director Korrie Taylor and producers Michaela Oney and Sarah Anson have performed magic on a budget, especially with Stephanie Long’s costumes. From the original production, only Kathy Egloff as Jack’s harridan mother has been retained. Her wail is louder, and her wig is more frightening.

Director Taylor, an artist of sunny disposition, is an adroit persuader, starting with two important men. She talked internationally known children’s author Bruce Coville into being the Narrator and holly- wearing Mysterious Man. Talk about credibility. Apart from Coville’s fame, he used to run Full Cast Audio’s recorded books and is a man of many voices.

Taylor has also lured Abel Searor as music director of a nine-player ensemble. Searor, known for his authority with Sondheim scores, has also restrained his volume after the recent Chess in the same space.

For the cast of 17, Taylor has thrown the net wide. Important new faces start with Corrie Raulli as Cinderella, perhaps the most demanding vocal role. Up from the music pit is musician Colin Keating as the stalwart Baker, who must also deliver musical chops. Recently returned from Nashville is Briana Jesse Duger as the diminutive but pugnacious Little Red Riding Hood.

Leila Dean always brings a show-stopping presence but she’s been mostly in supporting roles in recent years. With a prosthetic nose and pointy chin, she’s the Witch of nightmares, until her late first act transformation into a Nordic beauty with pre-Raphaelite red hair. This role is often perceived as the lead (Bernadette Peters, Meryl Streep), and musically, even more than visually, Dean dominates every one of her scenes.

Other top musical moments go to the two caddish Princes, played by Derek Powell and Corey Hopkins. Their mock romantic “Agony” is the unusual Sondheim melody that sticks with you. So does the ethereal yodel of Rapunzel, played by Terri Kennedy. Jack the beanstalk climber is a thankless role but Nicholas MacLane shines in two solos, “I Guess This is Goodbye” and “Giants in the Sky.”

Only a female director would cast two beauties, Natasia White and Hali Greenhouse, as Cinderella’s stepsisters, as well as allow her mean Mother (Heather Jensen) a peacock walk.

Another musical revival with fairy tale leanings, Disenchanted!, was welcomed with packed houses during its opening weekend, proving that “brought back by popular demand” is no empty boast. Disenchanted!, Rarely Done’s season finale at downtown’s Jazz Central through Saturday, June 23, brings back its memorable box office success from September 2011.

The intervening seven years have been kind to Dennis Giacino’s naughty Disney spoof. Originating in Orlando, where the proximity to the Mouse House made Disenchanted!’ s irreverence more than a bit blasphemous, it has since run off-Broadway, where more experienced hands trimmed the original show’s excesses and redundancies. It returns with eight of the best talents in community theater, including three from the 2011 production.

Although the show consists of 12 numbers featuring nine different characters, it enjoys more unity than last time and is much more than a haphazard satirical review. Much is made of portrayals of women as helpless or passive, as in “The Princess Myth,” or, implicitly, Naomi Wolf’s The Beauty Myth. Not for feminist politics, however, but for gag lines.

As Snow White (Mary Musial) says, “Look at me. Do I look like I need to sit around waiting for my prince (two-beat pause) to come?” Further, the princesses are weary of having waists narrower than their necks as they proclaim, “All I Want to Do is Eat” (preferably Haagen-Dazs) in the second act.

Musial, always known as a strong player, has never been funnier or sexier. Zubieta, who returns from the original production, generates more sparkle this time. Opera singer O’Brien Brown, one of the most commanding voices in community theater, comes up with sterling comic chops, becoming what they call at La Scala a splendid zanni.

Ceara R. Windhausen, who has been having a great season (The Hunchback of Notre Dame, Chess) also returns from the 2011 version. Her earlier, legless Little Mermaid was not as raucous or naughty as this one, and she wins the trophy for outrageousness. Her interplay with leering men in the audience, which sounds improvised, delivers the show’s peak moment of hilarity, with a dozen near rivals.

Also returning from the original is Sunny Hernandez, who does double duty this time. Her Mulan is still a lesbian, shouting “Without the Guy,” but she adds a Rapunzel who reminds us of the German origin of several folkloric figures.

Carmen Viviano-Crafts reinvents Belle from Beauty and the Beast as a madwoman who talks to knives and forks. Michele Lindor’s Pocahontas will not stoop to talking to trees. And with an abrupt change of idiom, Jecoura Fields tells us that the Princess who kissed a frog is black.

Female scene-stealing is also part of the fun with Fortune, the season opener at Ithaca’s Hangar Theatre, which always likes to bring us the unknown. Under artistic director Michael Barakiva, there appears to be an unstated policy to produce plays that neither you nor your snobbish friends have ever heard of. Last summer it was the world premiere of Dégagé by first-time playwright and choreographer Mimi Quillin.

This summer it’s Fortune by Deborah Zoe Laufer, a playwright of modest but rising reputation whose works have appeared at Steppenwolf and the Humana Festival. Fortune opened at the Marin Theatre Company, across the bridge from San Francisco, in January 2005, and has been pretty much neglected ever since.

Fortune enjoys other assets, however. In a candid program note Laufer reveals that she wrote the original version of the play about 20 years ago while she was a student at Juilliard. The fellow student who directed that incarnation turns out to be Michael Barakiva, now calling the shots at the Hangar. Together they decided that playwright Laufer herself should take the helm. With Kent Goetz’s scenic design, Mira Veilkey’s costume design and Deborah Constantine’s moody lighting, this is surely the best-looking Fortune the world has ever seen.

According to the premise, surly Maude (Amelia Pedlow) is a third-generation fortune teller in Brooklyn who hates her job and hates her life. With a start like that you might expect an actress who looks like Roseanne Barr or even Maria Ouspenskaya, but no. Pedlow sometimes speaks with a vaguely Slavic accent, but she’s a lovely young lady, even when bedraggled, and may not yet have hit 30. When clients come to her quarters, she covers her face with a veil and gets crabby.

Her only client is a desperately unhappy certified public accountant from Brooklyn Heights named Jeremy (Ian Lowe). Wadded bills leap out of his pocket because he will pay any fee, although it sounds like he’s seeking a shrink rather than a fortune teller. Will he ever be in love?

Despite the glasses, Lowe is a leading man from central casting whose mug shot would be click bait on any dating site. Still, he threatens to hang himself from the nearest lamppost if his terrible loneliness is not assuaged. Experienced playgoers know that casting is destiny in romantic comedy, and what passes for suspense is mere diversion.

Maude, with face covered, tells Jeremy that the woman of his life will be redhaired, and he can go to meet her now on the Promenade in Brooklyn Heights. In rapid succession, Maude dons three different red wigs, first as a plain and unthreatening Jane, then an underdressed hooker, and finally as a tough-as-nails biker.

Playwright Laufer has also been an actress, and Fortune exists primarily to let Pedlow have as much fun as she can. And she does.