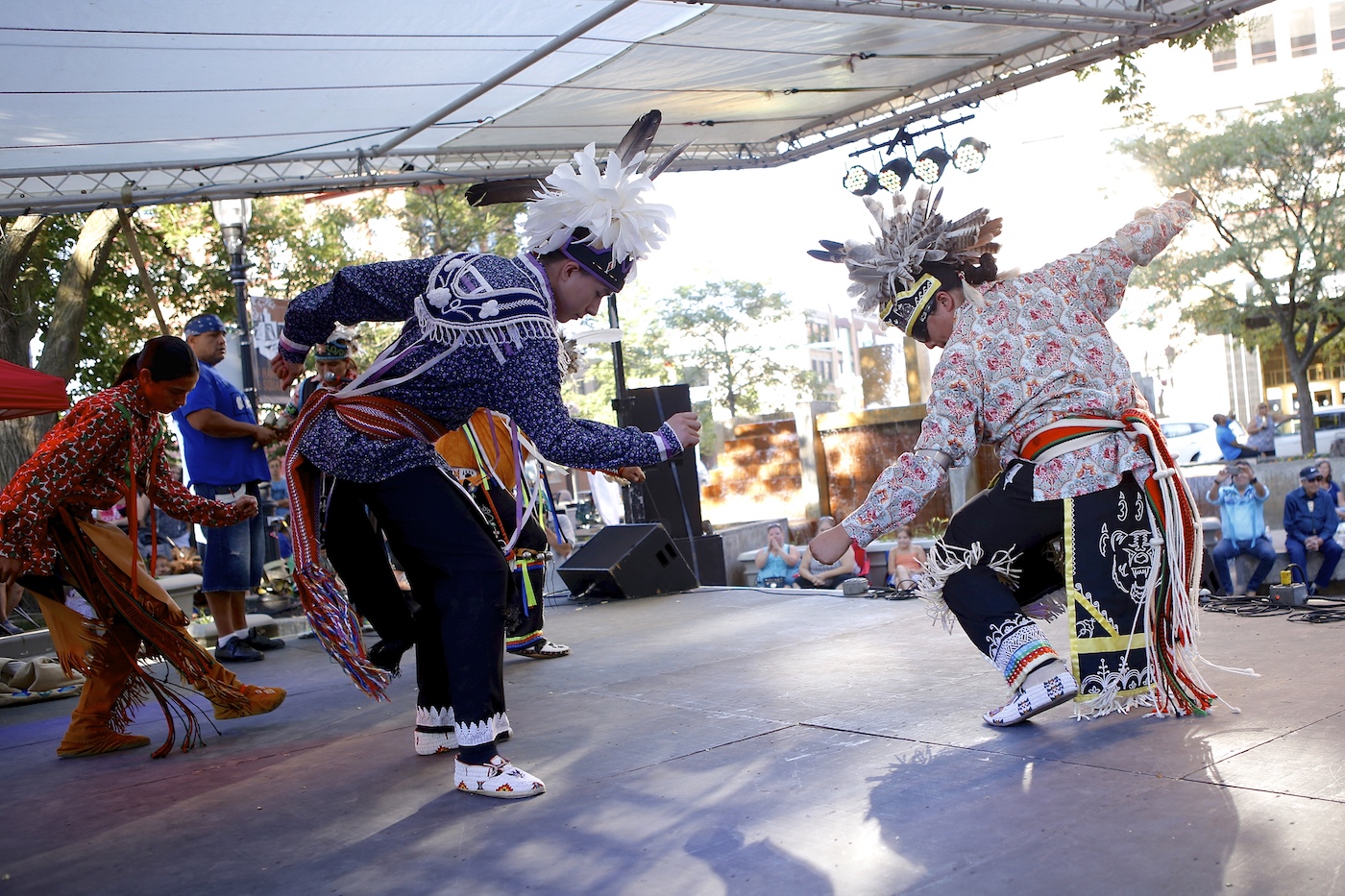 Regarding last year’s Stage of Nations Blue Rain EcoFest, co-organizer Irv Lyons Jr. said, “If it isn’t broken, don’t fix it.” He didn’t have to reiterate himself this year, because the schedule is as packed as it was last year. The 2017 edition also adds an extra evening, running Thursday, July 27, through Saturday, July 29, in Hanover Square.

“I had hoped we could keep continuing since the beginning,” Lyons said. “It depends on the community’s involvement. It’s sponsorships. We don’t make any money off of this. (Making money) was never our intent. Our intent is to show our culture.”

The Blue Rain EcoFest is one of four main festivals celebrated during Arts Week in downtown Syracuse. For its eighth year, the family-friendly Haudenosaunee cultural event will feature an eclectic lineup of music, smoke dancing competition and other activities in the square.

A free presentation of the film Spirit Game: Pride of a Nation will kick off the fest on Thursday, July 27, 8 p.m. Patrons should bring lawn chairs to enjoy the documentary about the Iroquois Nationals Lacrosse Team. The rain location will be the City Hall Commons’ atrium across the street.

Spirit Game, directed by Peter Baxter and Peter Spirer, has garnered plenty of local and national interest, plus it has received favorable reviews on film websites such as IMDB and Rotten Tomatoes. “Everything in life is connected,” said Irv Lyons in a separate interview. “This movie is a great preface for the festival.”

“(The film) is a platform for the Haudenosaunee,” said co-organizer Rex Lyons, who noted that it’s a vehicle not only for lacrosse, but for culture and politics as well. “It allows us to have a dialogue, to share our differences.”

In a separate interview, Irv Lyons was asked about the difficulty of having a dialogue. “There isn’t enough time. It’s hard to build relationships when we don’t have enough time. And in order to really get to know someone, you have to spend time with them. Now we get to look forward to spending three days with the community.”

The popular smoke dance contest should be a festival highlight. Notable dancer Chris Thomas, who has been a part of previous Stage of Nations festivals, is excited to help out other dancers for this year’s event.

“This is a great competition,” he said. “I’d like to see it grow. It will attract other dancers in other nations throughout the state and in Canada to come participate.”

“It’s great that we have festivals like this in the city,” added Thomas. It’s not only great to recognize the Haudenosaunee, but doing so also helps eliminate misconceptions toward Native American culture.

Irv Lyons also stresses that this festival goes beyond the Six Nations that compose the confederacy. It incorporates the rest of the community, regardless of ethnicity or background.

The event’s sponsor is Circare, a nonprofit that specializes in chronic health and substance abuse cases along with several mental and behavioral health-related services. In 1989, the organization was originally founded as Onondaga Case Management Services. Along with company growth and increased service, it was rebranded and renamed last year. Not only does the organization focus on services, it also offers educational and outreach components.

“The beginning, wishing everyone well,” said Circare executive director Scott Ebner, “that is our mission to serve our communities.”

Scott Lyons will echo those words of thanksgiving when the festivities officially kick off on Friday, July 21, 5 p.m. When there is a ceremonial or social event, Lyons said, the thanksgiving presented is not only to wish everyone well, but also to remind people of their connection to each other and to earth. As living beings we should be appreciative of what we have and where we have come from.