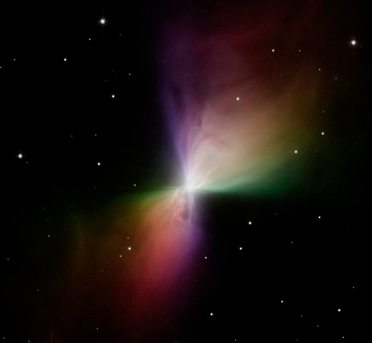 Who knew a Catskills outing to enjoy the fall leaves would feature a Spinning Boomerang UFO.

Early October 2014, Holly and Adell both live in New York City. So when they were offered an opportunity offered to use a friend’s cabin in the picturesque Catskills during fall leaf season, it was a treat, not to be passed up.

The cabin was located on a 60 acre property near Barryville, NY, a Catskills hamlet of about 1275 persons. Shortly after arrival at the cabin, both women settled their things and spent time taking photographs of the vivid forest leaves.

After sunset the women were treated to striking night sky that neither of them would ever have seen through the light pollution of the big city. Visible above them the enormous cluster of stars that make up the Milky Way, Holly and Adell decided to take some time exposure photos of the night sky.
Adell was busy making adjustments on her tripod mounted camera. Holly, still amazed by the amount of stars that could be seen with the naked eye, was looking up, taking it all in. Suddenly, a UFO appeared above them.

“It was shaped like a boomerang and twirled quickly, silently across the sky. It was huge. From my perspective, I would say it appeared to be about five feet wide, but I sensed it was very high in the sky and could only imagine the true size to be much, much larger,” Holly tells us.

Both women realized from the UFO’s movements that it wasn’t a natural phenomenon like a meteor and whatever it was, it was under intelligent control.

Adell explained, “… the shape was very sharp, I knew immediately it was made by an intelligent being. It glowed-green, like the color of a glow stick, and there appeared to be markings on the boomerang: a circle near the end of each of its “wings” and three thin lines on each side where the “wings” met at the center.”

The women report that the Spinning Boomerang UFO spun across the sky from east to west, and then disappeared.

Let’s look at some other recent UFO sightings in New York Skies:

7 October 2014: at about 7:30 p.m. a resident of Chaumont, NY observed three bright white objects in a triangle formation moving across sky.

7 October 2014: at about 8:30 p.m. a resident of Russell, NY saw a glowing object moving rapidly in the night sky. The observer is an experienced pilot and states that it wasn’t any type of craft she’s ever seen.

7 October 2014: at about 11:00 p.m. a resident of Mastic, NY witnessed big orange lights in V formation joined by more lights before turning away and silently heading our way in a cluster.

8 October 2014: at about 6 a.m. a resident of Newburgh, NY was up early to photograph the lunar eclipse. He took about 80 photos. Upon inspection of his photos he noticed an object in just one photo. The object was two red lights with a very bright white light in the center.

8 October 2014: at about 6:45 a.m. a resident of Brooklyn, NY observed a white sphere glowing very bright and moving in and out of the cloud cover and doing aerial maneuvers that no plane or helicopter  can do. After about 20 minutes of activity the sphere shot very fast straight up into the sky and disappeared.

8 October 2014: at about midnight a resident of Amherst, NY saw a red light that hovered in the sky about 15 minutes. Then the red light began moving back and forth in the eastern and western sky, then it quickly disappeared moving south.

13 October 2014: at about 8 p.m. several residents of Binghamton, NY witnessed two UFOs coming from the north east. He reports that: “They looked like lake buoys but were bright like they were on fire and they made a wobbling motion as they moved.”