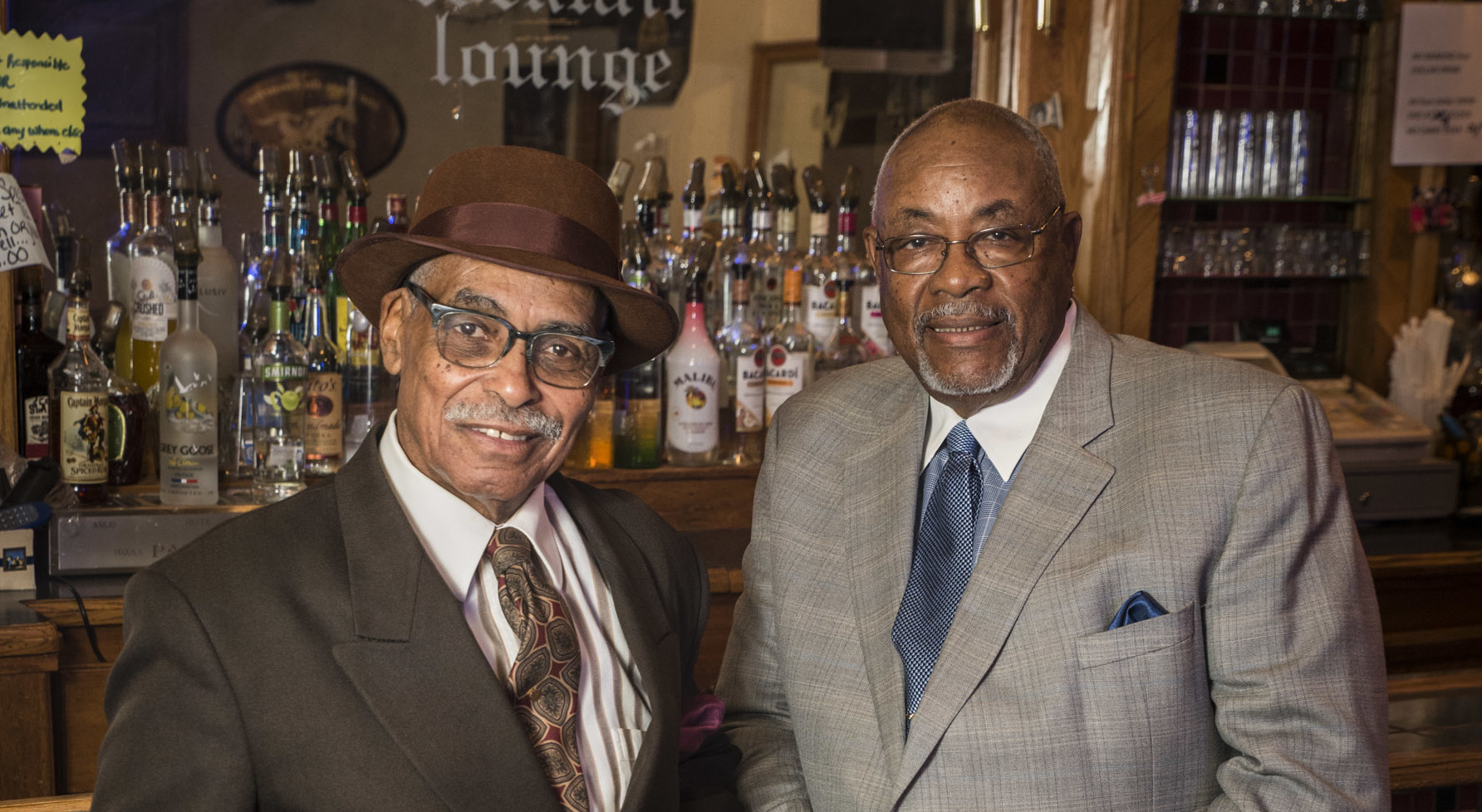 By Walt Shepperd and Ben Cleeton

In November 1989, two Billy Rays got together and opened up the B&B Cocktail Lounge at 310 South Ave. Billy Ray “Little Bill” Denham and Billy Ray “Big Bill” McDonald had met at work at Carrier Corporation. “We wanted to make a statement to the community,” Little Bill recalls. The South Side destination will close Dec. 30 following a 28-year run.

The location had previously housed Otto’s, with a primarily Caucasian clientele, but the neighborhood was changing to predominantly African-American. The Tippin’ Inn, having moved from East Fayette and Beech streets, had already established itself as a “black bar” two blocks down the street. 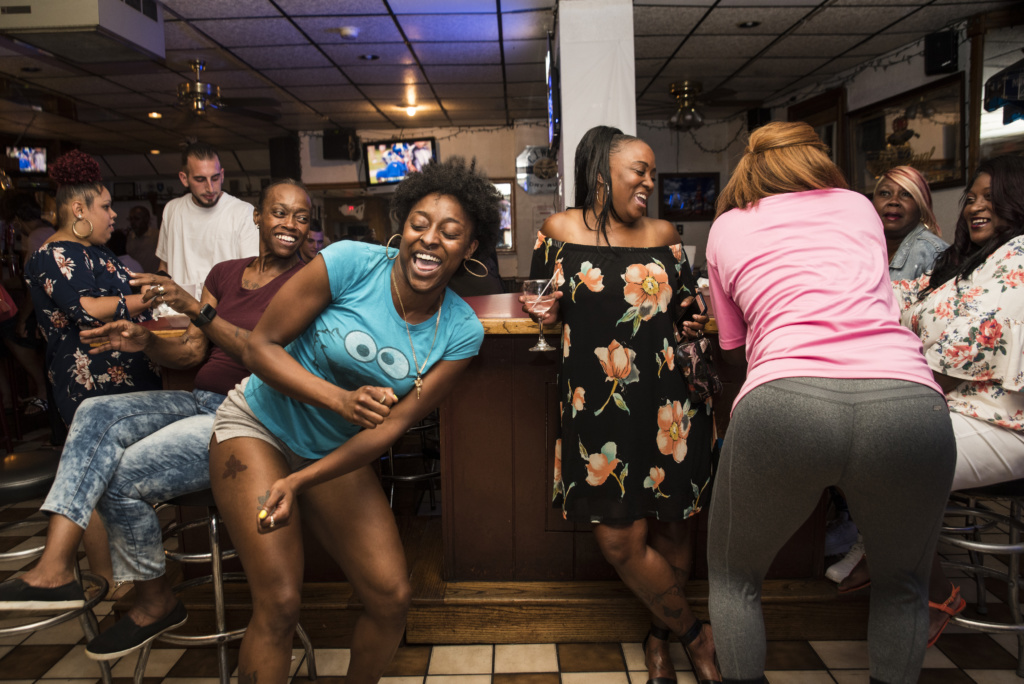 “It’s like a home away from home.” (Photo by Ben Cleeton)

“We wanted a place that all people could hang out and have a good time and meet and conversate with friends,” says Little Bill. “That was our goal. We didn’t want no club or hotspot. Over the years we got to be a landmark.”

“The first time I came here,” Samuel U. Adams remembers of the B&B’s opening night, “I wasn’t the first one that paid a dollar but I bought a couple pitchers of beer. I came in the following weekend and have been hanging ever since. I live next door.”

Tiana Tyler remembers the first drink she made as a bartender seven years ago. She messed it up. “People who come in here regular are more than regulars,” she says. “It’s like a family. Your second family.”

“We’re like family,” Adams agrees. “And like any family, they cuss you out, you get mad at them, you cuss them out. But you know that these are your people.”

“It’s like a home away from home,” says Terrie Green, a B&B patron since its opening. “I can say that out of the 28 years I’ve been coming we’ve probably only had maybe six months of bad times.”

Eddie Mitchell Jr., coordinator of the Team A.N.G.E.L. Youth Program two blocks down South Avenue at the Southwest Community Center, began coming to the B&B when he turned 21. “Everybody gets along,” he says. “You learn advice, they teach you things, they give you wisdom.”

“We built this place,” Little Bill maintains. “We put this place in action as a community place.”

The many community activities sponsored by the B&B include the Baby Boomers Basketball League, several bowling leagues, and the Syracuse Golf Association junior program.

One member of the Syracuse Golf Association, Barbara Moon, taught at Blodgett and Fowler schools before retiring. She often finds herself the only white person at the B&B. “I’m the only white spot in there a lot of times,” she says. “But to me it’s a very diverse bar. What I love about it is that everybody is welcome. All different stripes come through there. And diverse in terms of age. There’s professional people, there’s working people. It’s just a great mix.

“I know one thing for sure. B&B has been part of the solution and not the problem. They have not been treated fairly in the paper (the thrice-weekly Post-Standard) all the time. If something happens in a 10-block radius, B&B’s name and the picture of the front of the bar gets flashed on the screen.

“One of the best nights of my life was the first time Barack Obama got elected. It was like there couldn’t have been a better place on Earth to be than to be at B&B that night. ’Cause you know, a lot of the older folks in there are from down South. They grew up under Jim Crow laws. When I look back at that, I feel privileged to have been a part of that.

“So I can’t really explain my own set there. I just know I feel a part of it. It’s where we go after a funeral when you don’t want to go home yet. You just want to be around people that knew where we go.”

“People love coming here because we do know how to deal with people,” Little Bill explains. “We know how to treat people. Over the years people come to me and come to Bill: ‘How can you guys do this? How can you stay in business so long and never get shut down?’”

Last month, however, the two Billy Rays announced that the B&B will be closing at the end of the year. What happened?

“It was a lot of fun up until about five or six years ago,” Big Bill says. “Then everything changes. Community changes, people change, we changed. We get older. You get a little bit more wiser so things is a lot different. One of the different things is myself. I’m 74 years old. I don’t have that energy anymore to do these things.”

For Little Bill, the changes reflect what is happening in the neighborhood. “Back in the 1970s, back in the 1980s, we was dealing with baby boomers. And baby boomers are definitely a great group of people. They were young, energetic, working, had jobs, and they were patronizing businesses. But now things have changed. The baby boomer is my age and older, 70, 75, or 80. So they are not coming out anymore. A group chooses the next song on an electric jukebox machine. (Photo by Ben Cleeton)

“And you got this young generation and everything is totally different. We don’t want to cater to the young generation. They say you have to change with time and we changed with time, but we refused to change 100 percent. The crowd is out of my hand.”

“This is my neighborhood that I’ve grown up in since the age of 10,” Green explains. “At one point in time I could walk to the bar and walk back home late and there wasn’t any issues. But now since time has changed I won’t do that.”

“When B&B first got here it was a beautiful neighborhood,” Adams observes. “Everybody got along. Everybody came to this bar. Came here on every holiday, every party, every Christmas, every anniversary. Owners’ birthdays, barmaids and bartenders’ birthdays.

“But it’s the fact that what’s going on in the street can destroy any business, especially if you can’t control it. They’ve been struggling for those past three years. You don’t want it to leave here but all good things come to an end.”

Amazon HQ2 Pitch Is A State Secret
Extras! Read All About It!
To Top