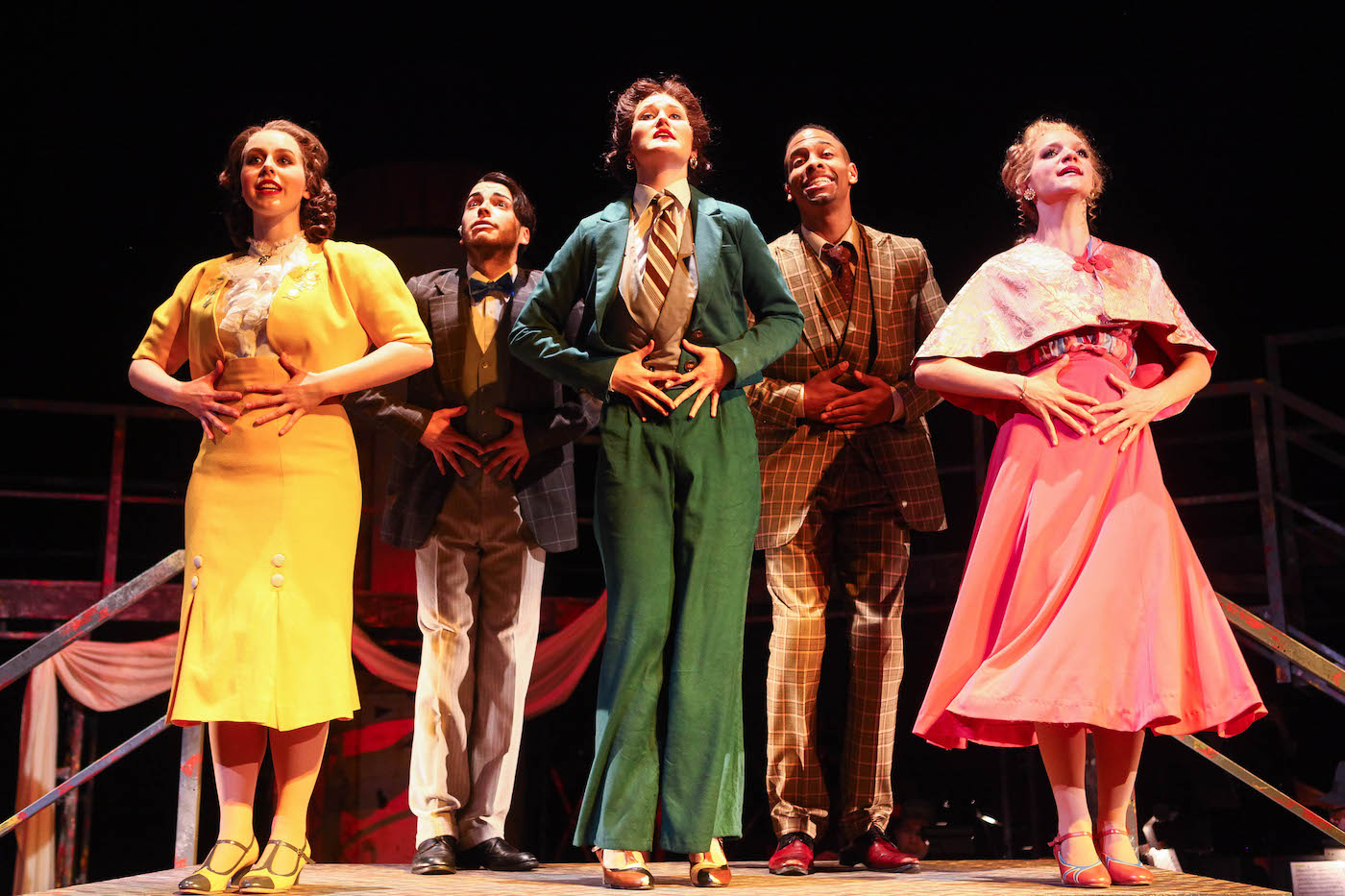 SU Drama’s “Berlin to Broadway with Kurt Weill” journeys through the composer’s life.

Legendary Lotte Lenya, the great composer Kurt Weill’s widow, once opined: “There is no German Weill, and no American Weill. There is no difference. There is only Weill.”

Well, you could have fooled me. It hardly seems possible that the same person who wrote the murderous “Mack the Knife” also wrote the lovesick “September Song,” and 12 years apart — but also an ocean apart. So it’s quite a journey through a brief but immensely prolific career in the aptly titled Berlin to Broadway with Kurt Weill: A Musical Voyage, running through Saturday, May 13, as the season finale from the Syracuse University Drama Department.

Taking a cue from the subtitle, director David Lowenstein and scenic designer Sofia Zavala have constructed the abstract impression of a ship whose decks and gangplanks readily lend themselves to other purposes. That voyage begins in gritty, depressed Weimar Berlin, the same setting (no coincidence) as in Kander and Ebb’s Cabaret. Costumer Jessica Crawford puts the entire cast in drab proletarian duds. And it ends in the bright pastels of post-Depression America, where Weill and Lenya took up residence in luxury hotels, keeping company with successful artists and show people.

Quite apart from containing so many diverse and excellent musical numbers, Berlin to Broadway is an extravagant vehicle for letting student performers strut their stuff. Talk about range and variety. In the original 1974 production, rarely revived, four players took all the numbers. Lowenstein has extended that number to 10. So in the first act we get Gabrielle Samuels overflowing with weltschmerz in “Barbara Song,” and then teamed in the second act with Matthew Steriti in “Moon-Faced, Starry-Eyed.” These are eye-rubbing moments. And it makes one grateful that SU Drama now includes mug shots next to performer profiles in the playbill.

Berlin to Broadway is entertainment, not a lecture, but with so many musical numbers it cannot resist linking the bitter, radical Weill of the 1920s with the celebratory, often smiling composer of the 1940s and 1950s. American popular culture came roaring into Europe right after World War I, unmistakably influencing Weill. His German orchestration includes not only a guitar but also the banjo.

The early Weill wrote mock American tunes, like the world-weary “Alabama Song.” His collaboration with Bertolt Brecht included the 1929 musical comedy Happy End, based on the stories of Damon Runyon more than 20 years before Guys and Dolls.

Similarly, Weill did not throw his social conscience overboard when sailing to New York City. He was what right-winger of today call an SJW, a social justice warrior. Despite the high-style Broadway successes of Lady in the Dark (1941), the first musical about psychoanalysis, and One Touch of Venus (1944), a satire on art schools, the composer’s heart was with the oppressed and suffering. His first American opera, Street Scene, adapted Elmer Rice’s realistic portrayal of tenement life. And his last opera, Lost in the Stars, was based on Alan Paton’s novel of apartheid South Africa, Cry the Beloved Country.

At the time of the acclaimed Glimmerglass Opera revival in 2012, several commentators suggested that more than 60 years after the composer’s death, Lost in the Stars might rank as Weill’s greatest work. In the current production Markcus Blair sings the title number while seated in a plain wooden chair on a bare set, delivering the music’s power unaugmented by production distractions. Blair has also been assigned a gooseflesh-inducing rendition of “Mack the Knife,” surely Weill’s best-known number, from The Three Penny Opera. What the structure of the show and Lowenstein’s direction are underscoring is that Weill was a profound artist every decade of his life.

All 10 cast members achieve peak moments where they dominate the stage, and it is churlish to rank one ahead of another. Some songs simply present stronger opportunities. Maxwell Anderson’s lyrics for “September Song,” from Knickerbocker Holiday, are arguably the best in any Weill number, allowing Andrew Ryan a glowing, memorable moment. Similarly, the always clever Ogden Nash penned the words for “Speak Low,” another of the best of the Broadway numbers, originally intended for fellow German exile Marlene Dietrich. Here the quartet of Matthew Steriti, Sondrine Bontemps, Gabrielle Samuels and Tucker Breder plumb the deepest emotion.

Then again, there’s an advantage with songs most of the audience has forgotten. Zofia Weretka stops the show twice, with “Pirate Jenny” from Three Penny, and the naughty “Saga of Jenny,” about the choices a girl has to make, from Lady in the Dark.

Music director Brian Cimmet and his six-player ensemble, always visible in appropriate costume, remind us why Kurt Weill’s critical esteem has deservedly been on the rise.