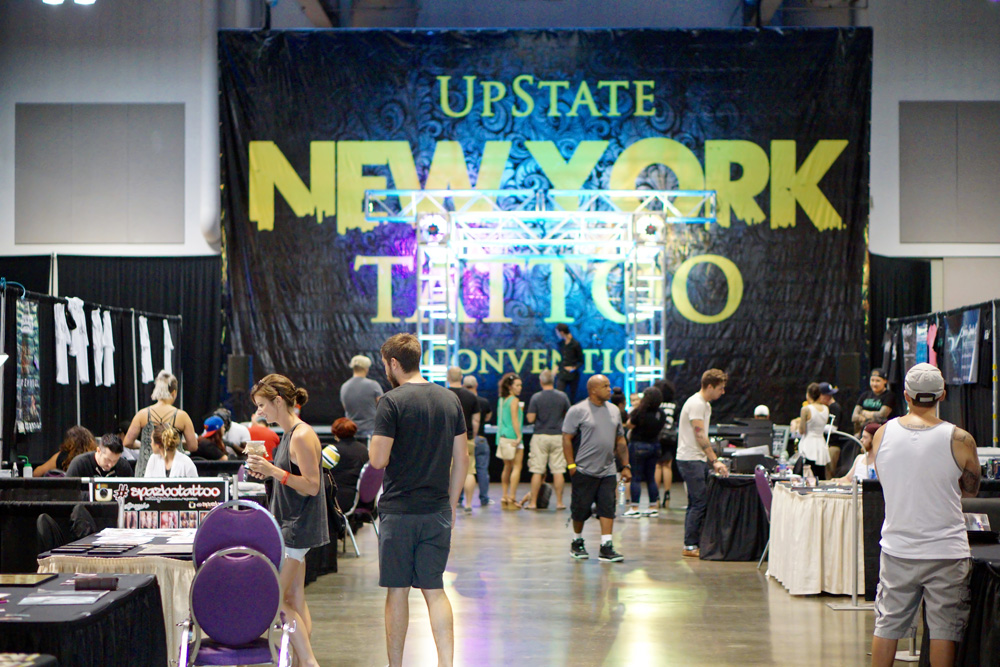 CNY gets inked during first edition of tattoo convention.

The sound of buzzing needles echoed throughout the Pirro Convention Center from Aug. 12 to 14 during the first-ever Upstate New York Tattoo Convention.

Tattoo artists from the Syracuse area and around the world occupied booths in four separate rows, each decorated by vibrant signs displaying their company’s name and examples of their work.

Convention organizer Carmelo Silva, of Carmelo’s Ink City on Hiawatha Boulevard, said the event involved six months of planning. While attending other tattoo conventions around the country throughout the year, Silva observed what goes into creating a successful show, as well as deciding which artists he wanted at his own.

“A lot of these people I actually know personally,” Silva said. “I have one guy from France, one from China, six from Canada and (others from) California. All over.”

For an entry fee of $20 and free admission for ages 12 and under, attendees could watch others get tattooed, purchase paraphernalia from World Famous Tattoo Ink or get inscribed themselves. For some, deciding who would tattoo them involved flipping through binders of sample work from the artists.

Other attendees let someone else choose for them. “I had my son pick one out for me,” Roger Williams, 33, of Cortland, said of his new Batman tattoo on his leg. “The little one saw something that caught his eye.”

The convention also featured a unique lineup of sideshows. Contortionist Jared Rydelek executed feats such as eating fire, wiggling his body into and out of multiple tennis rackets and inserting an entire sword down his gullet. Nathan Kepner and Morgan Tsu-Raun, as the Crescent Circus, performed magic, including a neat trick where Morgan disappears behind a large sheet and Nathan appears in her place.

The most difficult-to-watch spectacle was the show put on by Skindicate Suspension. Body suspension is the art of hanging from a structure — in this case, a steel beam frame — by lodging hooks and other tools inside the skin of the performers. Understandably, Silva said this presentation was just for the adults.

“I definitely wanted to get body suspension in here,” Silva said. “A lot of the bigger (tattoo) shows are the ones that do it. That’s where I’m planning on going with this show and having a lot of people from all over the state coming up here.”

During the convention’s final day, for a hefty fee of $200, a seminar on the technique of color realism tattooing was available. Poch, a guest artist from California who frequently visits and tattoos at Carmelo’s Ink City, presented the demonstration.

“Poch does maybe 30 conventions (per year) all over the world,” Silva said. “He’s been tattooing roughly 18 years or so, and he’s one of the top artists in the industry. The seminar was only supposed to be about an hour long, but he went really in depth so it went about two.”

Toward the end of each day, trophies were awarded to artists and attendees looking to show off their ink. Titles ranged from best back piece to best leg piece, along with more unique categories such as best geometric piece — a style Silva said is becoming increasingly popular.

Artists agreed the inaugural convention was a success, with several picking up new clients along the way.

“It’s an awesome show,” said Michael Wiltse, of Your Mom’s Tattoo Atelier in Minnesota. “For a first-year (event), I’ve been busy. The artists are really great. Really good vibes; fun times. It’s one of the best shows I’ve been to this year. We’re definitely going to be here next year.”

Matt Christiansen, of Create Tattoo and Art Studio in North Syracuse, said the location couldn’t have been better. “It’s pretty much in my back yard,” Christiansen said. “My girlfriend sold a ton of jewelry that she makes and I picked up several new clients who didn’t know my company existed.”

Silva said he is planning a sequel to his Upstate New York Tattoo Convention. “(I want to have) the same artists that are here, and maybe about 20 more different artists,” Silva said. “Definitely different shows going on, and we might be doing some type of battle. I’m pretty impressed with the first year’s turnout. It’s only going to get better from here.”

Watch video of the event:

View photos of the event: