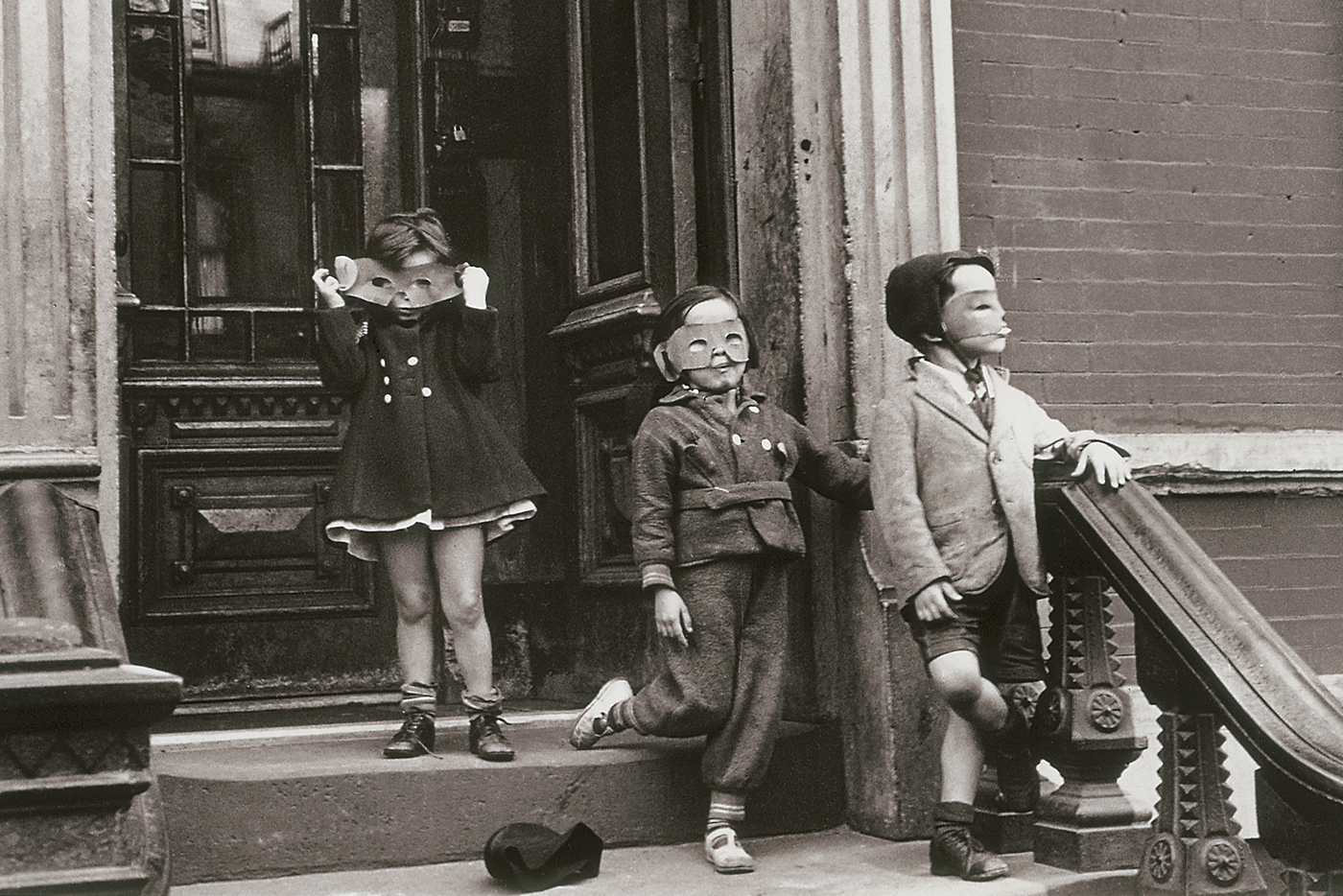 The evocative street photography of Helen Levitt is on view at the Everson.

This winter the Everson Museum of Art is focusing on street photography, displaying images taken in 1890s Paris, 1930s Harlem, 1960s Syracuse and other locales.

The main attraction, Helen Levitt: In the Street, showcases an artist who shot New York City streets for almost 70 years, creating poignant and humorous photos referencing people, place and the feel of city life. A companion show, featuring works by 22 artists, touches on street photographers over a 100-year period.

Levitt’s one-woman exhibit demonstrates how she approached city streets with fresh eyes and an ability to avoid cliches. There are several images of children behaving just as children do. Levitt photographed three children in masks near the front door of an apartment building, a group of children looking across a street at bubbles floating in the air, and a very young child heading back to her mother’s embrace. One of her images portrays a curbside scene in which children investigate a broken mirror. Two of them shift through shards, two hold the mirror’s now empty frame, and a little boy appears to drive his bike through the frame.

In these and other images, Levitt interpreted everyday scenes, documenting how ordinary people used public space. In one photo, two women discuss a day’s events. In another, an elderly woman sits on a stoop with a cane near her. That image simply depicts a moment in her life.

Many of the photos were shot during 1930s and 1940s, but Levitt kept shooting during subsequent decades. A 1977 photo portrays a scene in which people come together for a moment. A man is in a phone booth, a woman stands just outside it, and a third person is near a mailbox. In the foreground, a street vendor hands a snow cone to a customer whose torso didn’t make in into the image. Thus, only the customer’s hand is visible.

Levitt also took photos in New Hampshire and Mexico, and the exhibition includes a few of those images but also makes it clear that this was a minor aspect of her work. She concentrated mostly on New York City streets and the people wandering along them, building a substantial artistic career.

The group exhibit, From Paris to Syracuse, encompasses more than 60 images of street photography from the collections of the Everson Museum and Light Work Gallery. It provides a historical perspective by moving from Eugene Atget’s 1898 shot of tar workers repairing a Paris street to Aaron Suskind’s documentary-style photos of Harlem residents during the 1930s to images created during the last 30 years.

And an extensive portfolio makes it possible to document a range of artistic approaches. For example, Jon Reis’ shot of two women crossing a city street captures the precise movement when one of them steps over a manhole cover. Steam blows in the air, and it looks like the woman is being swept away.

Elsewhere, Toren Beasley’s “When We Were Cool” portrays three African-American youth in a tight, intimate shot. In contrast, Michael Spano’s wide-angle shot of four street musicians shows them playing in a city setting with no one around. There’s an illusion of a neighborhood abandoned by other people.

Moreover, the exhibit presents pieces by well-known artists: Robert Doisneau’s depiction of  a carousel on a Paris street deluged by rain; an image of a woman in front of a restaurant as seen through the lens of Mexican photographer Manuel Alvarez Bravo; Garry Winogrand’s shot of a man receiving money from a passer-by. Finally, the show includes images by photographers who have depicted local scenes. The New York State Fair is prime territory for street photographers, and it’s fitting that From Paris to Syracuse includes a photo by Bruce Gilden, who interprets the flow of human traffic at the fair.

Simpson Kalisher, from 1968 to 1973, took dozens of photos in Syracuse culminating in a series, “The City Seen,” exhibited at the Everson in 2001. He has several images in the current exhibit; they depict a Veteran’s Day parade, a scene on the South Side, and a young couple walking down Marshall Street on a sunny day.

In addition, Syracuse New Times photography editor Michael Davis has created a portfolio of street photos taken in Syracuse, Boston, Oakland and other cities. He has several images in the exhibition, with the best portraying three men walking down the street. The first two each hold a phone to a right ear while the third presses a phone to his left ear. The photo is whimsical and incisive as it comments on our times.

Helen Levitt: In the Street, curated by the Telfair Museum of Art in Savannah, Ga., is clearly worthwhile in itself. It does a fine job of presenting Levitt’s work and communicating her passion for photography and for life in New York City. However, running the show in concert with a survey-style exhibit expands the conversation, allows viewers to get a better sense of street photography. And it demonstrates that both the Everson Museum and the Light Work Gallery have a variety of top-notch images in their collections.

Levitt’s solo exhibit is on display through May 8 at the Everson Museum, 401 Harrison St. From Paris to Syracuse wraps up May 15. The museum is open Wednesdays, Fridays and Sundays, noon to 5 p.m.; Thursdays, noon to 8 p.m.; and Saturdays, 10 a.m. to 5 p.m. Admission is $8 for adults, $6 for seniors and students, and free for museum members, children age 12 and under, and active members of the U.S. military. For more information, call 474-6064.