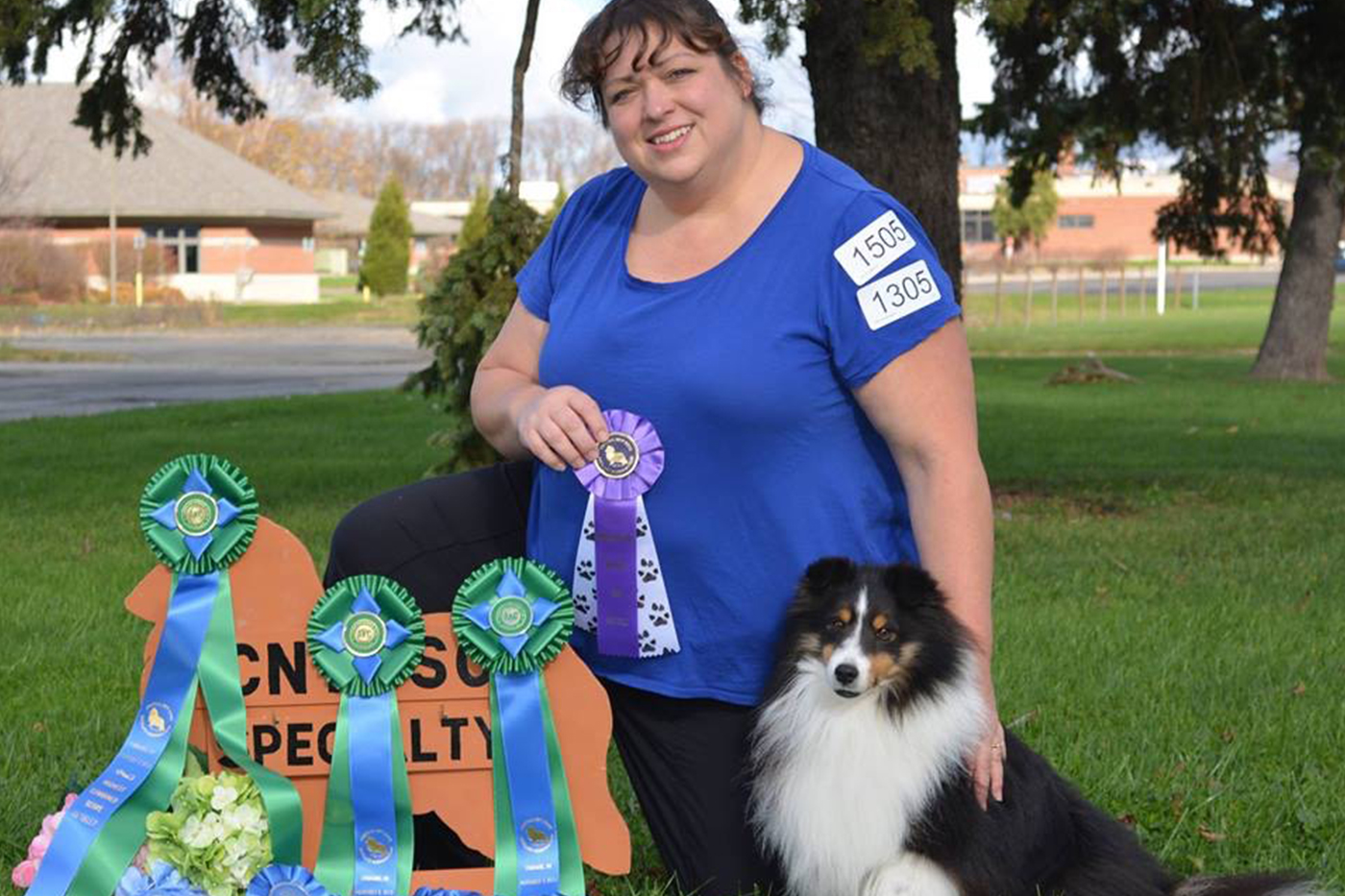 The first time Ann Marie Letto stepped foot into the show ring, she could feel her heart beating out of her chest. Her ears rung as silence descended. You’d think with over 500 dogs, there would be plenty of barking, but not with show dogs.

She pressed her hands to the dress suit she wouldn’t normally wear to try and flatten out the non-existent wrinkles. “What if I fall?” she thought as she looked at the grass spread out before her. “What if I don’t remember the pattern?” She looked around as sweat dripped down her back, “Do I have my dog?” Her conformation mentor, Dennis Smith, walked over with an amused expression on his face. “Are you going to breathe?” he asked. “I’ve gotten a lot better since that first conformation show,” Letto said with a laugh. “I’m still nervous that I might not catch the pattern exactly how it’s supposed to be or that my dog will not behave himself, but you never know until you get out there. There is no feeling like it.”

Letto has had dogs all her life and learned how to care for them at a young age. One day her and her fiance were at a pet store and came across a black and white dog that was labeled a Shetland sheepdog, but at the time, Letto didn’t know there was such a thing as a Shetland with those particular colors.

“I knew from having dogs that you don’t want to buy one from a pet store because you don’t know their background or genetic history,” Letto said. “So, I started looking online for bi-black Shelties and found a breeder who had 8-week-old puppies. That’s how we got our first show dog, Kieran. In 2001, we thought he was going to win the world because that is what our breeder had told us, but unfortunately that is not always the case.”

Perfect nose, perfect teeth, perfect ears and perfect feet — show dogs must have it all. “You can take any backyard dog and make it look like a show dog. It’s what we like to call the icing on the cake,” Letto said. “You can make the icing look presentable and make the dog look like a show dog, but once the judges put their hands on them, whether on the table or ground, they are going to feel the cake and know what you put in for ingredients.” Letto has to always think of the generations of puppies to come.

The first thing owners should do if they want to show a dog is go to the American Kennel Club‘s website to find out what the breed standard is for a particular dog and make sure the best qualities that dog can have happens in every litter. With Letto’s Shetland Sheepdogs, one of the standards is to be agile, which means that the dog is able to bob and weave with little difficulty. The dog must also have a round muzzle and not a fox-like muzzle; they should stand between 13 and 16 inches at the shoulder; the tail has to be long and rest straight down or in a slight upward curve; ears need to be in front of the shoulders, not on top, and the handler or breeder must always remember that form follows function.

“If you have a dog that has a fault, you want to breed that dog with one that doesn’t have many faults,” Letto said. “For example, lets say you have a bitch and her ears are well-up on her shoulders, and they shouldn’t be, and then you have a male who has this perfect headset and great neckline, but he is missing a molar. Hopefully the puppies you get won’t have missing teeth but will have a perfect head carriage.”

After Letto realized Kieran wouldn’t be a champion, she had figured out that they needed to buy their own bitch to start breeding, so they got Daisy in 2002 at 6 months old. “We grew her out until she was 2 years old, but she never came into season, which should have happened around the age of 1,” Letto said. “So we had to make one of those heart-wrenching decisions of whether to keep Daisy or send her to a companion home and pursue what we wanted to do, which was to have a really good show dog. We ended up placing her in a good home that we supported the whole way through.”

After two more bitches and not much success from Kieran’s bloodline, Letto was about to give up, until their mentors, Dennis and Leslie Smith from Sugar Hill Shelties, expressed sympathy toward their situation. The Smiths, who have been breeders for 30 years, asked Letto and her fiance to co-own a couple of litters with them because they wanted to see her succeed. From their first two litters, Letto took home four puppies, and one of them became her first conformation champion, Grant. Mason after winning some AKC titles for agility.

Most show dogs are competing toward a championship, and in Letto’s case, an AKC championship. To become an official AKC champion, a dog must earn a total of 15 points, which includes two major wins under two different judges. “The points earned are awarded based on the number of dogs in the competition,” Letto said. “The more dogs you have, the more points you can get.”

Points vary with each breed, area and sex, and the AKC makes a schedule of points each year to equalize the competition. “Many people try to get their majors out of the way first because it can take up to a couple of years,” said Letto. “Grant finished in just one year with three majors.”

Grant is Letto’s steadfast conformation dog, and Mason, her other Shetland Sheepdog, is her steadfast performance dog. She can use these dogs in both performance and conformation, but like people, dogs have different personalities and strengths. Letto competes in the novice class, which are for dogs age 6 months and above who are working toward getting an AKC championship.

The AKC holds many shows that dogs are allowed to compete in to win their AKC titles. Conformation is known as the Westminster look, or the beauty contest. Judges look at the dogs overall structure and appearance to indicate whether the dog has the ability to produce quality purebred puppies. Obedience showcases dogs that are conditioned to behave at home and in public. Rally requires a lot of teamwork between handler and dog. It goes hand-in-hand with obedience where the dog has to complete a sequence of stations with an obedience move at each. Agility is the most athletic event. The handlers must memorize a pattern and lead their dog through an obstacle course while racing against the clock.

“The biggest challenge for me doesn’t even have to do with my competitions. The biggest challenge is fighting nature and not being kennel blind,” Letto said. “Sometimes you have to put your head above your heart and say to yourself, ‘Does it really make sense for me to keep this dog when he or she is not doing what they are supposed to?’ It’s the hardest thing to grow out a dog, fall in love and then see the cruel fate of a fault coming on. But, I always have a limit of four dogs in my home, and I make sure the dogs I can’t keep go to the best home possible for them where they can be just that — a dog.”

Letto is a part of a Shetland Sheepdog club that encompasses Watkins Glen to the Thousand Islands, where all the breeders involved stay in touch. This way, if Letto is contacted through her website, masetto.com, about someone who wants a puppy, but she does not have any available, she will send a contact to the closest breeder who does.

“We only sell puppies as companion puppies,” Letto said. “They are not meant to be bred for health and structural reasons. We are always trying to better our breed, and this way, we can.”

Spaghetti With Tomatoes — Cooking Italian With Joe
Contacting Extraterrestrials: The Method
To Top