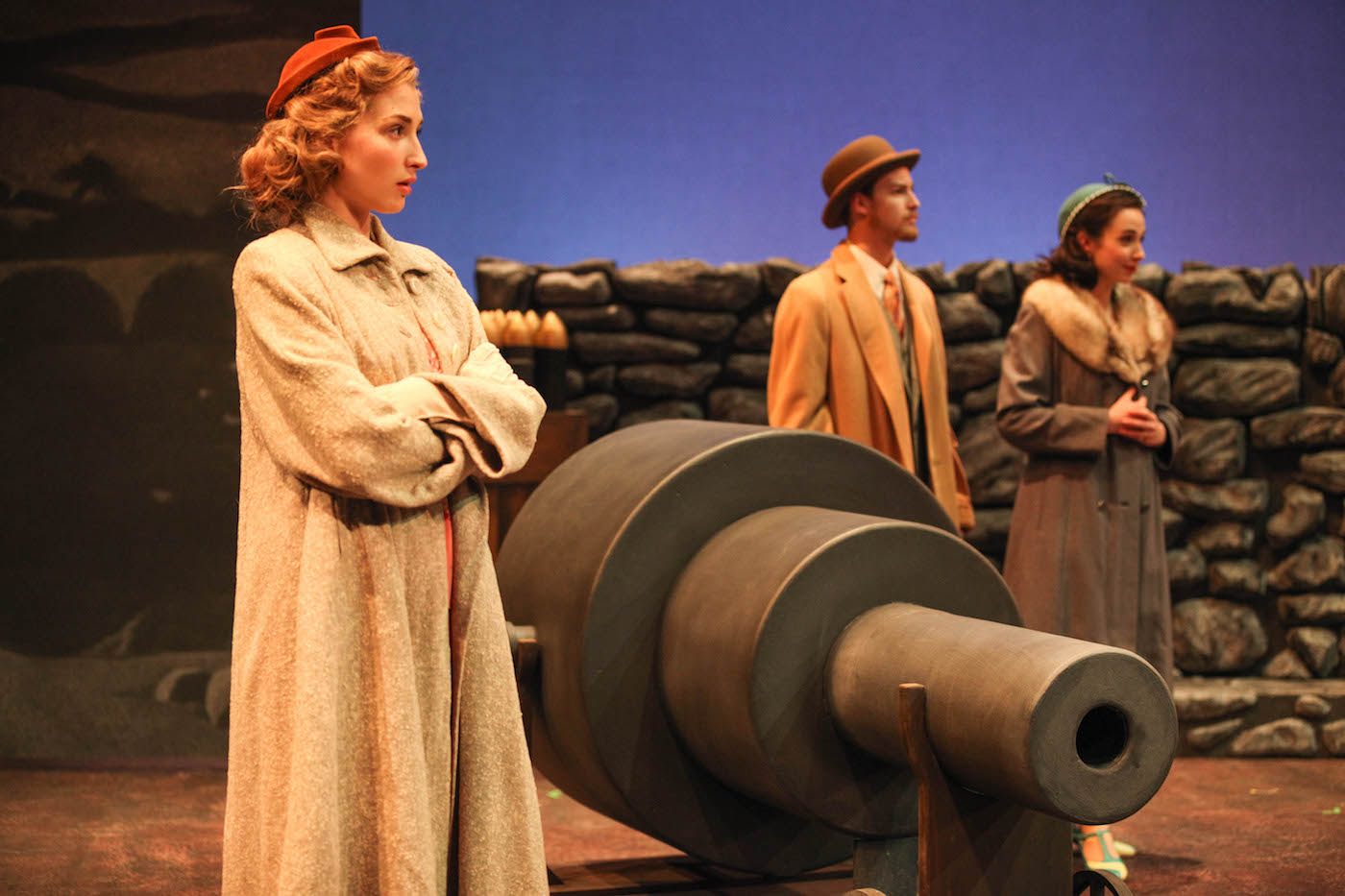 Any play with lines like “Pity: the scavenger of misery” or “Hatred: the coward’s revenge for being intimidated” deserves to be revived regularly. Even if it’s George Bernard Shaw’s Major Barbara, performed by the Syracuse University Drama Department through Sunday, April 9. It’s stuffed with long, long speeches that keep us in the theater until after 11 p.m.

Shaw is both a challenge and a reward for college companies. On one hand, undergraduates have to suffer through characters two or three times their ages. On the other hand, Major Barbara is generously packed with 14 speaking parts, each one a potential scene-stealer.

The idealistic, self-sacrificing Barbara (Kyra Stevens), from a privileged family, has joined the Salvation Army to assist the poor in West Ham, one of London’s most fetid slums. Her values collide with those of her father, Andrew Undershaft (Tyler Lyons), an armaments manufacturer and whisky distiller, who gladly accepts the sobriquet the press sticks to him: “Prince of Darkness.”

Much of the play is a debate between their two points of view, with Barbara’s side shifting to her wannabe lover, Adolphus Cusins (Rupert Krueger), a cartoonish Greek scholar. The heavily paradoxical Undershaft, a mouthpiece for the playwright, gets most of the best lines.

Recognizing that Shaw can be heavy and preachy, director Gerardine Clark emphasizes the light and comic elements in the text, sometimes with a spritz of slapstick. The first act works especially well. The scene is Undershaft’s library at fashionable Wilton Crescent. A late Victorian dreadnaught, Lady Britomart (Djuna Knight), is discussing with her model-handsome son Stephen (Caleb James Grochalski) about the worth of asking her estranged husband, Andrew, for funds. One daughter, Sarah (Olivia Barbieri), is engaged to go-getter Charlie Lomax (Noah Schindler), while the other, Barbara, now sports a major’s uniform from the Salvation Army. Scenes requiring lengthy exposition are usually so much theatrical housekeeping, but the impressive comic gifts of Djuna Knight strike sparks. Sharpening her edge is her ability to project the character’s age and conceal her own. Lady Britomart and Andrew have been separated many years, and his entrance is filled with anxiety. His full beard and honking baritone assert authority but something less than paternalism. In a spoof of the clichéd, uncaring father in any number of Victorian novels, Undershaft does not recognize any of his children and can’t keep them straight when they are identified.

It is here, before the play is over, that Undershaft makes his case that poverty itself is the crime and the salvation should be material rather than spiritual. Because he declares his faith to be that he is a “millionaire,” along with his self-assurance and brash manners, hasty audience members may be tempted to identify the armaments king with the current resident of 1600 Pennsylvania Ave. Hold on: The play was written more than a century ago. Shaw the Fabian Socialist did not turn capitalist for just one play. Instead, Shaw allows Undershaft, paradoxically, to prescribe material solutions to material problems.

When Undershaft offers to bail out the shelter with a huge donation, Barbara’s Army senior, Mrs. Baines (Lindsey Marcus), accepts. Barbara finds this an ethically intolerable compromise and abandons her uniform and her vocation. Nonetheless, Barbara follows through on her pledge to visit Undershaft’s factory, where he argues his case more trenchantly. In the last hour of the play, Undershaft’s sparring partner is Adolphus, Barbara’s beau, who in Robert Krueger’s hands is a witty and resourceful ironist.

Major Barbara premiered in late 1905, but director Clark has moved the action forward to 1936, the nadir of the Depression, poverty and misery closer to our own time. This presents an opportunity for costume designer Maria E. Marrero to dress the privileged ladies in 1930s-era chic. Whether intended or not, it also aligns Undershaft closer to the playwright. In the rewritten text Undershaft finds a new market for his wares with the Japanese invasion of Manchuria. In later life one of Shaw’s most block-headed opinions was the praise of the predatory, fascist Japanese for shaking up the somnolent Chinese.