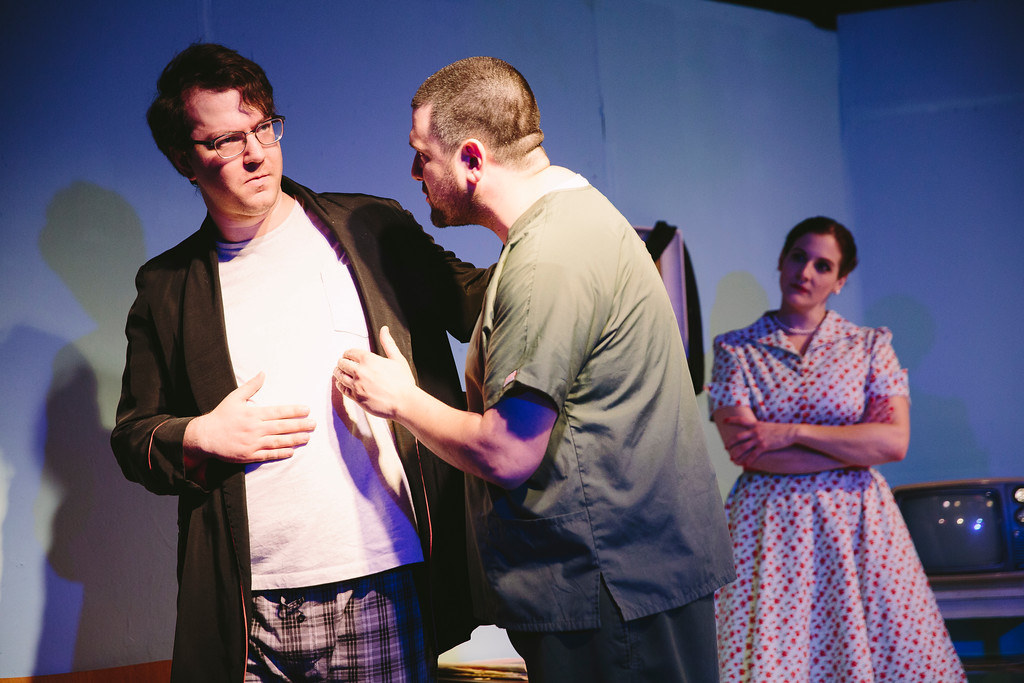 It’s a tradition only a few years old, but every spring Central New York Playhouse produces a Shakespearean classic in a new, audacious interpretation. Last year it was Macbeth via The Godfather saga; the three Weird Sisters in the first act were Italian nuns.

This year director Alan Stillman has placed Othello (running through Saturday, May 20) on what looks like the set of One Flew Over the Cuckoo’s Nest, a ward of the Indiana (not Oregon, as in the book) State Psychiatric Hospital. Characters are dressed either as patients in green or staff members in white. Stillman has worked hard to finesse the concept, even when it takes a shoehorn or hammer to make it fit, and audiences may have to scramble to keep up with all he is trying to do.

Ken Kesey’s novel One Flew Over the Cuckoo’s Nest appeared in 1962, then Dale Wasserman adapted it for the stage in 1963, also the year of the Kennedy assassination. Stillman times the action for a specific date in January 1964, with Kennedy’s portrait draped with black crepe. The replacement of that photo with one for Lyndon Johnson marks a change in tone. So far so good.

Stillman’s conceit affects the action in two ways. If all the patients are in need of psychiatric care, are any of them sane enough to be thought reliable? It’s possible that the entire production is driven by the delusional, who are just trying to mislead us, a device dating back to the landmark silent film, The Cabinet of Dr. Caligari.

Secondly, no one leaves the set when they’re done with their speeches. After Iago’s fatuous friend Roderigo (Justin Polly) has been exploited, he sits at stage right reading a book. Further, Desdemona (Kristina Rusho), who is neither a patient nor a staffer, is standing a few feet away from Iago (Dan Rowlands), listening when he announces his poisonous plans in soliloquy.

Put together, these devices encourage us to see the drama as artifice, somewhat the way Bertolt Brecht did in The Caucasian Chalk Circle. As with Brecht, all the emotions — love, hate, jealousy, rage — still feel genuine when expressed, even when we are reminded they are being created before us. But it is a cover for some of Stillman’s less plausible innovations, especially having Othello (James Sanders) be a janitor instead of a general.

Although James Sanders has been a presence in a variety of roles (Night of the Living Dead, Civil War: The Musical), he has not established a persona to play against, as did, for example, Tony Brown in his Othello (February 2012). With a B.A. in theater from SUNY Oswego, Sanders is one of the most secure in Elizabethan diction of the entire company.

His characterization loses, however, by having him as a janitor in a drab green uniform. A cool head, he takes charge of the drunken Cassio (Trevor Hill), a psychiatrist in a white coat, but it almost feels like an imposition. This Othello lacks the bravado and swagger written into the character’s lines, such as, “Put up your swords, or the dew will rust them.” Rather than being a tragic figure, he seems to be a decent guy put in a bad place, like Brock Peters in the movie version of To Kill a Mockingbird. When Iago’s plan works its way, this Othello is more broken-hearted than blinded by rage.

More successful is Dan Rowlands’ Iago, the most dastardly villain in literature. We’re used to seeing Iago as a Mephistophelian fox, smiling over his clenched teeth. Not here. With his prison-like buzz cut and grungy uniform, this Iago is a thug, a merciless pit bull. His verbal facility offers no veneer of gentility but just sharpens the edge. His aggressions further underscore Othello’s vulnerability.

Alabaster-skinned Kristina Rusho gives us a Desdemona for our time. Feminist critics have been grousing that the girl is too passive and imperceptive. This time she is filled with a love that defies her comic father Brabantio (William Edward White) and tries to cover for her husband’s missteps, much like some contemporary politicians’ wives. She’s also rounded and intelligent, as in the lovely hair-combing scene with Emilia (Lynn Barbato King).

Director Stillman’s heart is in this show. He co-designed the sound (with Rob Searle) as well as co-designed the set (with Chris Lupia), and then painted it all in chilling mint green. His Othello cuts new ground.