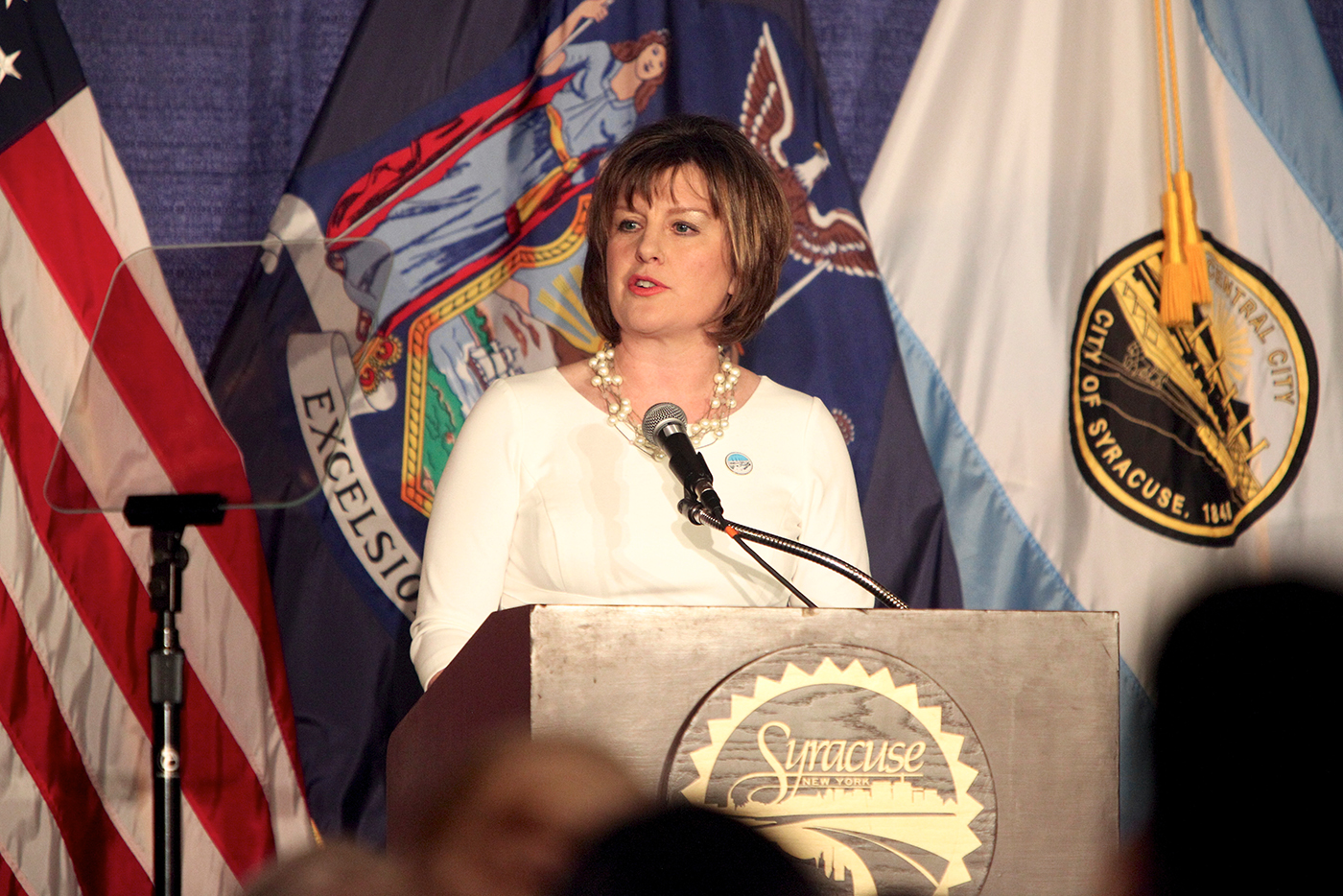 Mayor Stephanie Miner reflects on wins, losses in her last State of the City address.

Ritual hugging, glad-handing and self-conscious Caucasian fist bumps provided spontaneous photo ops for real cameras in the lobby of the freshly renovated Marriott Syracuse Downtown (parenthesized in the program as The Historic Hotel Syracuse for those not yet conditioned to the new name) as the Jan. 12 crowd gathered for Syracuse Mayor Stephanie Miner’s final State of the City Address.

Calm, in no way looking to lead cheers, the mayor had a sobering message, but managed a measured infusion of hope in projecting the city’s future. In a word, she maintained, the city has potential.

To symbolize that potential, Miner focused early on a condition unique to Syracuse, overlaid with an image hardly anyone in the audience could not identify with. Noting that she attended both the first day of school and every high school graduation, she admitted, “We are a poor city. More than 45 percent of our children live in poverty and we have the highest concentration of black and Hispanic poverty of any city in the nation. And yet, that first day of school, year after year, every kindergartener I saw walked in with brand-new shoes on their feet.” For the mayor, it represented “the promise and potential of a new beginning.”

At her first State of the City Address, Miner’s delivery had been stiff, with pauses seeming to anticipate audience response that, at times, did not come. This year her pace was steady, her tone commanding attention from a standing-room-only crowd, which responded spontaneously to mentions of returning $14.25 million worth of property to the tax rolls, contracting with at least 20 percent of minority- and women-owned businesses, establishing a $15-an-hour minimum wage for city employees and establishing a five-year residency requirement for new city hires.

But a sustained standing ovation met Miner’s pledge to establish Syracuse as one of the nation’s more than 300 Sanctuary Cities, “I want to take this opportunity,” she announced, “to erase some of the uncertainty and fear for our neighbors who happen to be immigrants. To that end, I promise you that so long as I am mayor, the resources of this city, including the Syracuse Police Department will not be used to help enforce federal anti-immigrant policies. We do so not only because it’s a moral imperative. We do so to honor our history.”

Returning to the image of new school shoes as potential, Miner presented the scope of challenge facing contemporary city residents. “When I started this journey,” she reflected, “I spoke of renewing the promise of Syracuse. In the last seven years, I have seen that promise again and again: young people dealt a tough hand who make their way to college and achieve their full potential, community projects that seemed perpetually stuck come to fruition, places like this (the Hotel Syracuse) thought lost, lifted up again to thrive in an exciting new era.”

But over those seven years, Stephanie Miner has learned that renewing that promise is not something accomplished by any politician. “It’s something we do together,” she maintained. “Syracuse’s promise isn’t something that can be put on a billboard, or in a press release, or on the front page of the newspaper. A community’s promise isn’t a promise made in words: not by politicians, or developers, or anyone else. It’s something we must believe; then we must build — together.