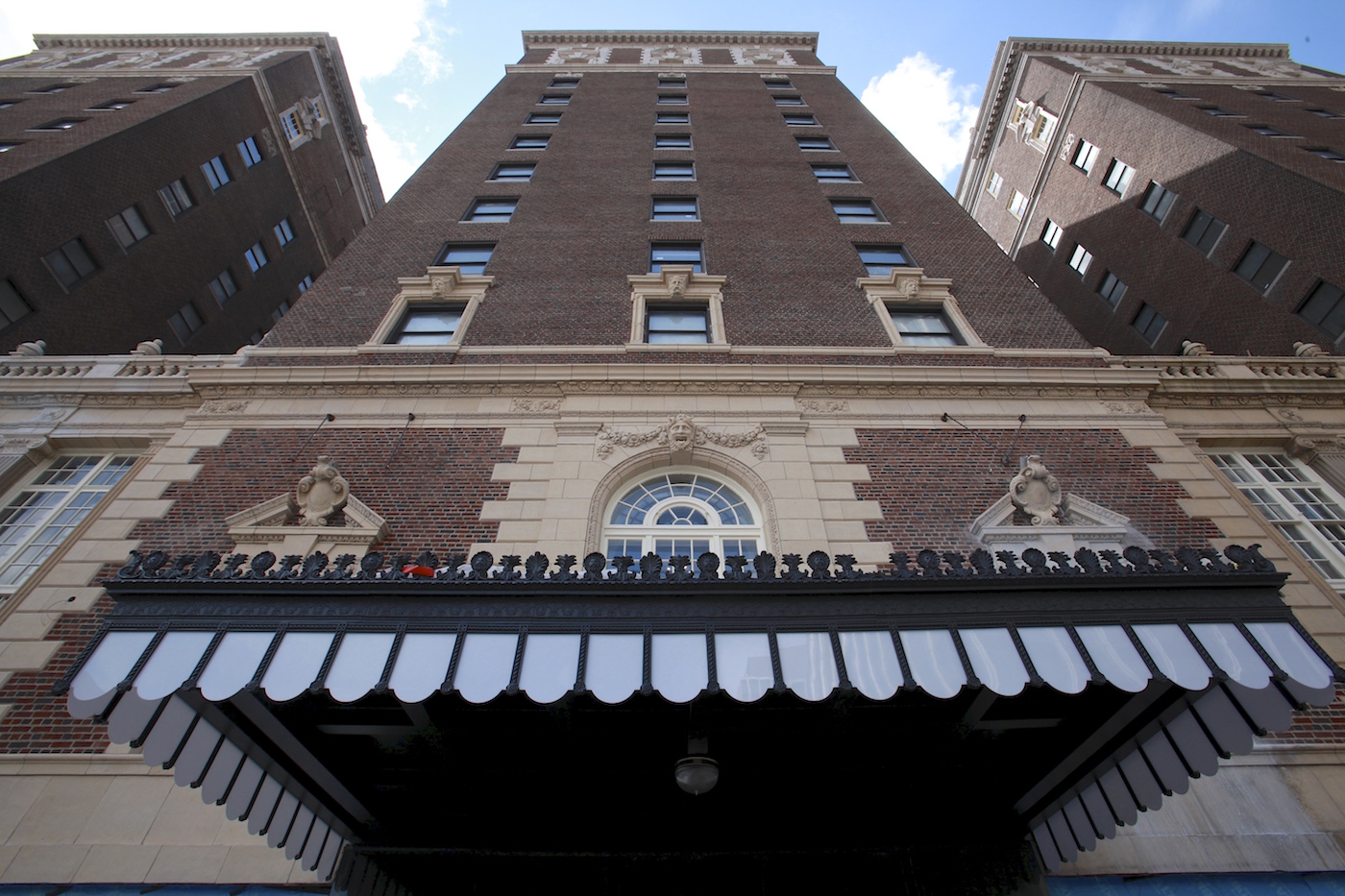 Ed Riley checks in to bring back the Marriott Syracuse Downtown Hotel.

Ed Riley tries to end each workday with a walk through the former Hotel Syracuse, now Marriott Syracuse Downtown, where he is spark-plugging the renovation of 473,000 square feet on 11 floors into 320 rooms which, he projects, “should be good for the next 90 years.” Riley, the founding partner and managing member of Hotel Syracuse Restoration, has been taking such walks for 40 years focusing on development, design, construction management and hotel operations. He started thinking about checking into the deteriorating local landmark 15 years ago.

But two years ago he told a coalition of public and private parties to get real. “You’ve got one more winter,” he warned about the fading grand hotel. They came up with $70 million to get him started.

He was calm during a nightly stroll last week, in the face of hallways full of unfinished rooms with seven weeks to go before being open for business July 4. With each worker he encountered he was quick to establish his knowledge of all details of the operation. With some he compared neighborhood notes based on his family’s four generations as Syracusans.

Riley’s father went to Christian Brothers Academy and was one of the first graduates of Le Moyne College. Riley followed at CBA and moved on to architectural studies at Onondaga Community College and Syracuse University. Now 62, having honed his craft on projects ranging from Arizona to Florida and as far as Hawaii, he reflects on his stints as consultant and sole practitioner at the Turning Stone Resort and Casino and in Armory Square. Riley smiles as he announces, “I’m home for good.”

What did it mean to be a “community-owned hotel” when it opened in 1924?

What it meant was that initially the business leaders of Syracuse put the seed money in to acquire the site and to get the design started and to set up the corporation. And then the corporation sold shares to people in the community. Why did it close?

Well, you had bathrooms that weren’t renovated since 1924. The real reason was that the rooms had deteriorated to the point where people weren’t staying in them. The last year it was open (in 2004), the occupancy of this hotel was about 15 percent. To try to keep a hotel of this size open with only 15 percent occupancy, that doesn’t even pay your light bills.

The reason it stayed open so long was the fact that there was so much business flowing through to use the Persian Terrace and the grand ballroom to keep it afloat.

(Child star) Jackie Coogan was the first famous, not average, guest. Then the average guest was a businessperson or a salesperson who was traveling through Syracuse to basically ply their wares. We were on the main line of the railroad at that time, so it was an easy city to get in and out of. So this was very much a business hotel as far as the overnight transient guest was concerned. It also had an extremely strong following on social catering.

Now, pretty much the same. The business transient would be a good part of it. The other leg of the three-legged stool, we have groups, being the hotel for the convention center. The third leg is the social catering, the events, the banquets, the weddings, all the celebrations in the city.

Back in the day, collegiate athletic teams playing Syracuse University would stay in the Hotel Syracuse. Are you anticipating group experiences like that?

Absolutely. We’ve already reached out to Colgate. I think we’ve booked two football opponents this year. Obviously, if the team is going to stay here, a lot of the alumni who come here for the game would most likely stay here, too.

Sometimes, on the same night, both Republicans and Democrats would host receptions for competing candidates for major office. Will you be working to redevelop that business?

If they want to come back and have their celebrations, we’ll definitely take them back. The whole idea behind this is to really bring this hotel back to its focus on the city. Hotels with less elegant orientations have grown up in the area. Do you see them as competition?

To some degree, yes. With the renaissance of downtown, the area is coming back; the growth markets in our economy are right down here. It’s Syracuse University, the Upstate medical university, the Veterans Administration, St. Joseph’s Hospital. That’s what’s driving our economy now.

When the Pirro Convention Center was being planned, a group of professional convention bookers came to consult. They maintained Syracuse should be recruiting medium-sized rather than major conventions, and that those attending really want to have everything, including meals, in the same building. What is your sense of the convention business?

We’re never going to be the go-to place for some huge convention that goes to Miami or New York City. You’ve got groups like the police chiefs and this is ideal for them because we’re in the center of the state. People drive in and stay for two or three days and nights. You’re downtown, you’re close to the convention center, close to Armory Square for restaurants, and, of course, we have our own restaurants. From that standpoint that’s the market we should be in, and that’s where we are. Conventions will be attracted by the quality of the hotel. What has resulted from your relationship with the Onondaga Historical Association and their research of the Hotel Syracuse’s history?

You can build a building, but you can’t build history. And the history’s here. When the people walk in, you don’t have to Disneyesque it. This is not a Disney experience. I’ve seen pictures of Amelia Earhart in the lobby and the Lindberghs in the barroom. I’ve had long letters from people about how they used to come down here as a kid and visit their grandparents. That’s not something that’s made up. That’s real history.

I think the biggest thing, and I think people understand why, is getting rid of the Hotel Syracuse name, and changing it to the Marriott Syracuse Downtown. But a lot of people have met here, dated here, spent their wedding nights here, had their 25th, even 50th anniversaries here. That kind of sentimentality can work for you.

A lot of people in this community didn’t believe that this hotel could come back. A lot of them now say it took your heart, passion and dedication, that you believed. Where did you get all that?

It took a core group of stakeholders representing the city, the county, some private interests as a team, who believed this could be done. Every time we encountered a stumbling block, we all sat down as a group and figured out a way to get around it. As the progress grew, the group got larger and more and more people understood that it could be done, and that it was very much worthwhile to be done.

You can believe that something should be done, but just because you believe it should be done doesn’t necessarily mean it’s going to survive and be profitable. This one is!

During Ed Riley’s walk with Syracuse New Times staffers through the halls and ongoing construction work at the Syracuse Marriott Downtown, he revealed a number of tidbits regarding the project.

An average of 450 workers are currently on the job each day during the renovations.

To meet 21st-century fire codes, a new stairway was constructed from the 10th floor’s Grand Ballroom to the street level. The stairway was built in the area that formerly housed the ballroom’s movie projection booth.

The guest rooms’ interior size has doubled, thanks to renovations of the existing 600-plus rooms, which has whittled the count to 320.

Custom-made furniture from Stickley can be found in the guest rooms and throughout the property. Silverware from local company Liberty Tabletop/Sherrill Manufacturing will also be found at the hotel’s full-service three-meal restaurants, including a steakhouse on the 10th floor. And the Syracuse-based Hall of Fame Barber Shop will be lowering the ears of guests and visitors.

The exterior’s new terra cotta details were made by a California firm, one of only two companies in the United States to handle this type of architectural work. And a Philadelphia business that does church restorations was in charge of the details that decorate the hotel’s mural.

The hotel’s executive chef is Tom Kiernan, profiled in the July 29, 2015, Syracuse New Times cover story, “Foodie with Flair.” Kiernan was interviewed by Margaret McCormick shortly after he was named the 2015 Chef of the Year by Syracuse’s American Culinary Federation, Following the publication of that article, it was a no-brainer for the hotel to put Kiernan in the kitchen.