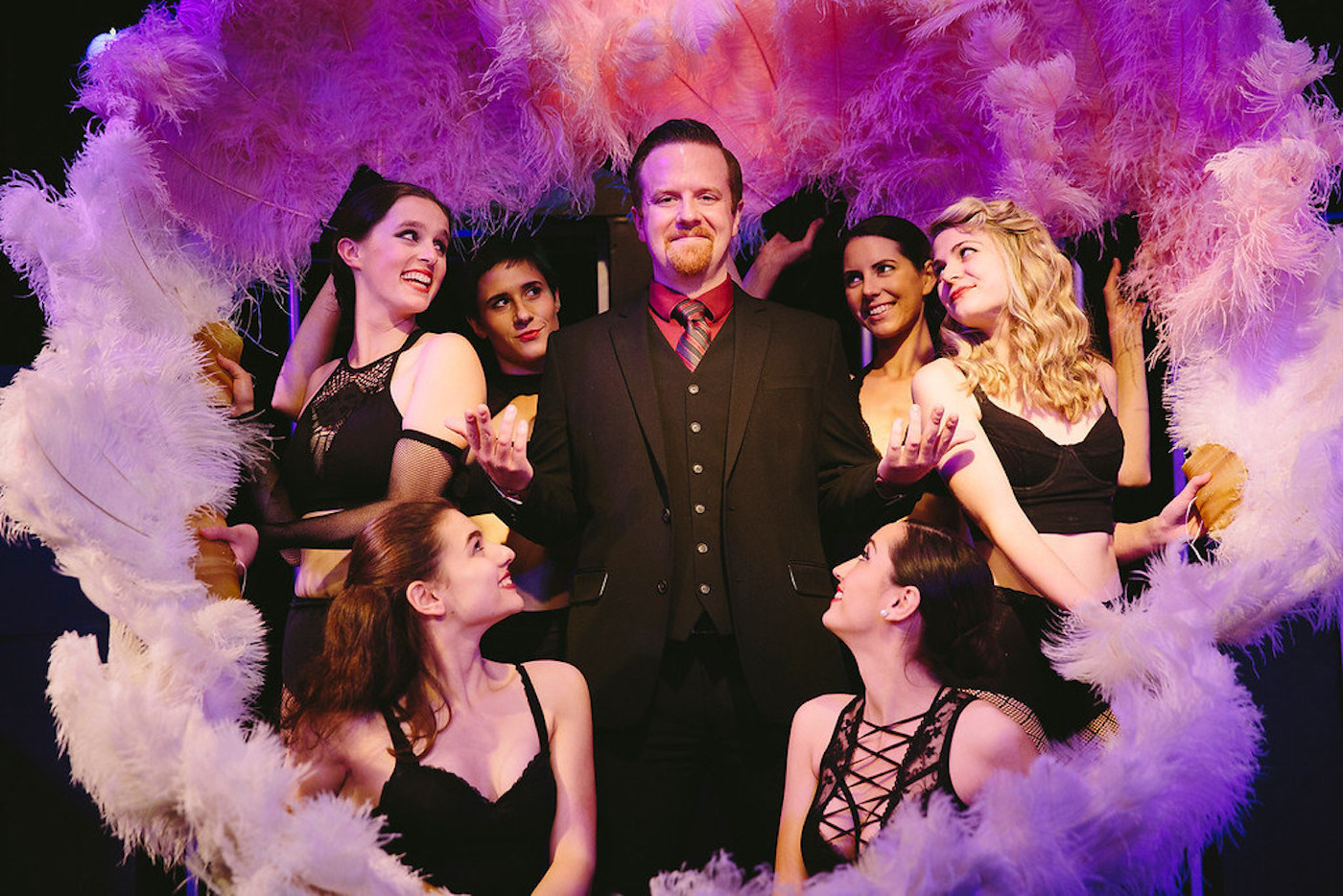 With 26 performers on stage and 10 musicians in the pit, Central New York Playhouse’s production of John Kander, Fred Ebb and Bob Fosse’s Chicago was already the most crowded place (save for Regal Cinemas) in Shoppingtown Mall, even before the standing-room-only opening-night audience showed up. This production runs through July 1.

It’s the dance show with legs. The original Broadway production of Chicago was elbowed aside by A Chorus Line 40 years ago, and Chicago did not really become a hit until the triumphant 1990s revivals in London and New York City. Now the appetite for sordid celebrity and razzle-dazzle is more ravenous than ever.

The episodes at the center of the story actually happened: Women in the Cook County jail for murdering their boyfriends-husbands, egged on by the tabloid press, looked to turn their notoriety into show business careers. They were the basis of Maurine Dallas Watkins’ naughty 1927 play and Ginger Rogers’ more respectable 1942 movie Roxie Hart. Ahead of its time? A convicted felon named Jeremy Meeks recently won a lucrative modeling contract because his sexy mug shot went viral.

In his program notes, director Dustin Czarny groans at what a huge job it has been getting this leviathan on his small stage. He started with strong and trusted allies like splendid music director Abel Searor, who also appears on stage, bantering with different players. His timing is resolute, in part because musicians have monitors to coordinate percussion with action, for example. The volume is thunderous, but lead players have the articulation and the miking.

Veteran choreographer Shannon Tompkins crafts her homage to Bob Fosse, assisted by Stephfond Brunson. Their excellence is immediately present in the overture when the chorus (several of them one-time leading ladies) wows the crowd. All that hip action in black, revealing Rodarte-themed costumes designed by Alicia Cobb promise a rare, sultry eroticism that continues to be displayed throughout the production.

Although the show is nominally about preparing murderesses for trial, much of the musical action is a contest between the reigning dame of the jailhouse, showgirl Velma Kelly (Erin Sills), who murdered her husband and sister, and the smart-acre upstart Roxie Hart (Alicia Rose Bronzetti). Tall, red-wigged Sills knows how to project power and authority; she was Evita on the same stage last summer. She starts strong with one of the show’s best numbers, “All That Jazz,” equaled by the second act’s “When Velma Takes the Stand.” The instinctively playful and irreverent Bronzetti makes her an effective foil, especially in her big number, “Me and My Baby.” In some performances choreographer Shannon Tompkins will be Velma and comedienne Korrie Taylor will play Roxie.

Defense lawyer Billy Flynn (Benjamin Sills), described as a “sleazy mick,” is more a co-lead than a supporting player, with several of Chicago’s most striking numbers. Flynn’s non-negotiable fee is absolute, but he warbles that “All I Care About is Love,” his head looking like the bud of a daisy surrounded by the petals of the chorus girls’ fans. He wallows in the corruption of the system, in which he knows how to exploit the razzle-dazzle.

The character known as Mary Sunshine (Dan Williams) is what once was known as a “sob sister,” a journalist hired to play up the sentimental. Williams’ uproarious falsetto comes across like Carol Burnett playing Florence Foster Jenkins. Oresta Paddock, in the ensemble on opening night, will take the role for some performances.

Central New York Playhouse, in a former retail space, can put up only so many seats. Expect tickets to be in short supply for this fun run.