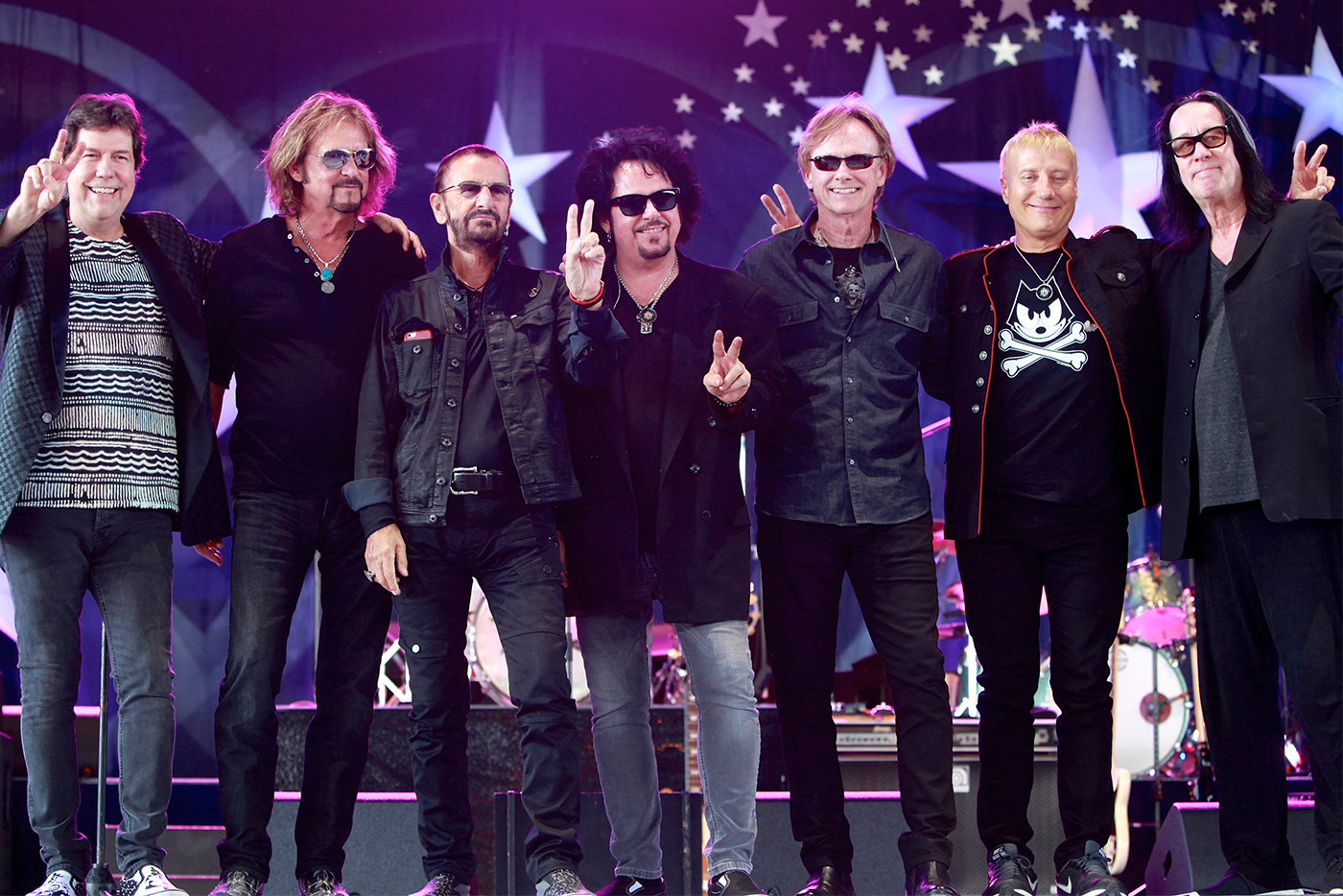 Ringo Starr gets some help from his friends at the Lakeview Amphitheater.

Ringo Starr didn’t just get a little help from his friends on June 3 at the Lakeview Amphitheater, he got a lot of it. And that’s just the way the former Beatles drummer likes it.

Ringo and his 12th and longest-running All Starr Band performed the second concert at the amphitheater and the first this season before more than 4,000 fans on a perfect early summer night. Ringo was the headliner, of course, and he sang 12 of his solo and Beatles hits, including “It Don’t Come Easy,” “Photograph,” “Yellow Submarine” and “With a Little Help from My Friends.” But when he wasn’t out front waving peace signs, Ringo was content to take a literal backseat on his drums and let the All Starrs play their hits during the 25-song, two-hour concert. The lineup featured Todd Rundgren, Gregg Rolie (Santana), Steve Lukather (Toto), Richard Page (Mr. Mister), drummer Gregg Bissonette and saxophonist Warren Ham.

The band is starting its fifth year together, and their familiarity and friendship was on display throughout the show. Whether it was Lukather doing a spot-on Carlos Santana impersonation on Rolie’s Santana classics, or Page’s bass and Bissonette’s drums making a swinging rhythm section, or the multitalented Rundgren filling the gaps on acoustic, electric and rhythm guitar, it was clear the band members could play each other’s material about as well as it could be played.

“That’s part of what makes us so tight as a group, not just musically, but we all realize we’re doing our best for each other,” Rundgren said at a news conference before the concert at the amphitheater.

The news conference was held to kick off the summer leg of this tour, which started in Syracuse and runs through July 7 in Los Angeles. Ringo, who last performed in Syracuse at the Landmark Theatre in 2000, said, “It makes our hearts sing to be here again” and he was thrilled to play in the new “shed.”

“This is the newest one ever built, I think. And we’re opening for it,” Ringo said about the Lakeview Amphitheater. “So we’re here because this is what we do and it’s a great place to start.”

At the start of the concert, Ringo jokingly said, “We’re lucky because people built a brand-new venue just to have us.”

(As an aside, not everybody was thrilled with the venue. The long walk from the dusty parking lot, exorbitant food and drink prices, padlocks on portable toilets, and backed-up traffic upset many concertgoers. But we’ll address those issues at another time).

The news conference provided insight on why Ringo has kept this group together since 2012. As he puts his All Starr bands together, Ringo’s only criteria are that each member has at least three hit songs and that they can support each other’s songs musically.

“And, you know, I just pick people I feel I love and who would be great to play with,” Ringo said. “And ’til the first day of rehearsal, I have no idea if it’s going to work. But this one worked so well and was so supportive, it’s just been a dream for me.

“And I was talking the other night with somebody about it, we’re getting longevity as a band now. It’s so far out,” he added. “And I have no plans right now to change it. So if I’m going on tour and they’re coming, that would be good for me.”

Rundgren, who has had success as a solo artist and with his power pop band Utopia, was a member of the second and fifth All Starr Bands in the 1990s. After joking that no “psychological evaluations” are needed to join the band (a good thing for the eccentric Rundgren), he explained why this particular band has stayed together. “Sometimes people have three hit singles and that’s the only thing they can play; they turn the volume off on the guitar for the rest of the set,” Rundgren said. “So there’s a combination of a certain kind of maturity in all of us and an experience playing with other musicians. I think that’s part of it, but also we complement each other’s material really well in a way that probably a lot of the other lineups couldn’t do.”

Rolie, whose vocals and keyboards on Santana hits “Evil Ways,” “Black Magic Woman/Gypsy Queen” and “Oye Como Va” provided the musical highlights of the show, said he wouldn’t have stayed in this band for so long if the members didn’t mesh like they do.

“The main thing is, the music itself, it’s different, but somehow because this is a band we make it sound like this band,” said Rolie, who also was an early member of Journey. “And as far as playing goes, if I couldn’t play the way I play now, I’d quit. It’s got to have a feel; it has to feel like something.”

Through it all, the glue that holds it all together is Ringo, whose peace and love mantra, good-natured personality and sense of humor provide the backbone for all of his All Starr bands. After all, who wouldn’t want to play with the drummer of the most popular group of all time who also jokes about his role in that band?

When performing “What Goes On” from the iconic Rubber Soul album, Ringo pointed out that the writing credit went to Lennon, McCartney and Starkey (Ringo’s real name is Richard Starkey). “It should have been the other way,” Ringo cracked, “but I’m easygoing.”

“It took me about two years, where every time I’d turn around and see (Ringo) I’d go, ‘Holy crap, what am I doing up here?’’’ Rolie said.

Fortunately, Ringo is still up there on the drum kit, one month shy of his 76th birthday. But he looks 50, and still has the enthusiasm for drumming that he had as a kid.

Watch video from the press conference prior to the concert:

The All Starr Band’s Most Meaningful Beatles Songs:

Ringo Starr: “Rain” He said it will always stand out for him. John’s vocal dominates, but next time listen for the brilliance of Ringo’s drumming and Paul’s bass.

Todd Rundgren: “Roll Over Beethoven” (Beatles version of the Chuck Berry song) It was the first time he ever heard bass drum on a record.

Gregg Rolie: “Please Please Me” It blew him away when he first heard it on his clock radio as a kid in California.

Steve Lukather: “I Saw Her Standing There” From The Beatles’ first appearance on The Ed Sullivan Show in 1964.

Richard Page: “Day Tripper” He tried to learn the song on his guitar as a kid.

Greg Bissonette: “You Can’t Do That” He loves the way Ringo’s cowbell complements the song.

Warren Ham: “With a Little Help from My Friends” He was mesmerized by the entire Sgt. Pepper’s Lonely Hearts Club Band album.

Love Is All You Need: When asked at a pre-concert news conference for a reaction to now-deceased singer and Syracuse University alum Lou Reed’s comment that The Beatles were “garbage,” Ringo Starr took the high road and said he liked Lou Reed’s music. “Everyone didn’t like us. Some of them couldn’t understand us, some of them thought we were worthless,” Ringo said. “But thank God the majority didn’t think like that.”

Set list from Ringo Starr and His All Starr Band concert on June 3 at the Lakeview Amphitheater: