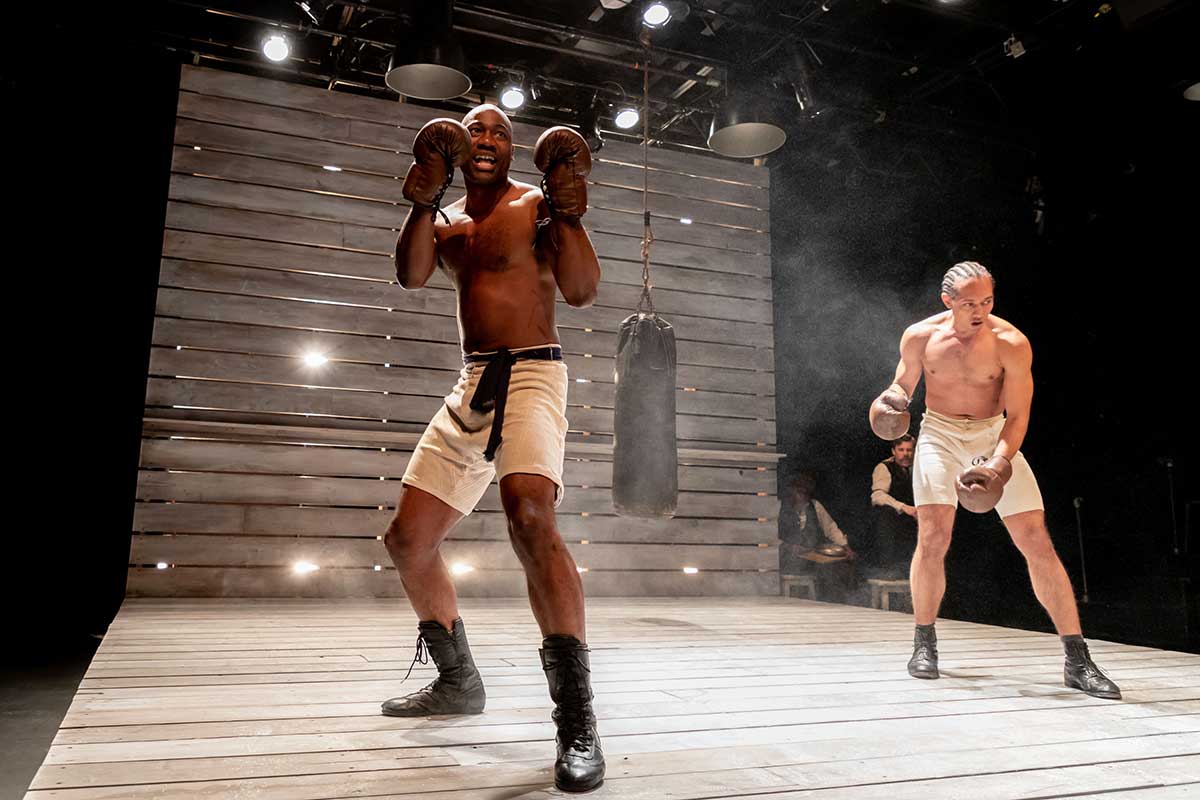 If your idea of a boxing drama is “Rocky” and “Raging Bull,” you’ve come to the wrong place. “The Royale” overturns every expectation and stomps on clichés.

Legend closely resembles history because they’re both made of the same stuff. Famed heavyweight boxing champion Jack Johnson (1878-1946) has already inspired a historically based drama, Howard Sackler’s Pulitzer Prize-winning The Great White Hope (1967), later filmed in 1970. Playwright Marco Ramirez has something else on his mind with his drama The Royale, running through Sunday, March 31, at Ithaca’s Kitchen Theatre Company.

The boxer protagonist of The Royale is named Jay Jackson (Jamal James) for creative independence. Although Jackson’s career follows the same trajectory as that of the historical, the lyrical words in his mouth are Ramirez’s projection, what the boxer might have said if he knew what was to follow in the next hundred years.

In saying something new, The Royale overturns every facile expectation and stomps on clichés. If your idea of a boxing drama arises from the movies Rocky and Raging Bull, you’ve come to the wrong place. No gloved fist ever connects with sweating flesh. Indeed, the innovative and unconventional staging is just the beginning of what makes The Royale compelling.

When the drama appeared at Lincoln Center in 2016, the director was the paradigm-challenging Rachel Chavkin, currently helming the Orpheus-in-New Orleans musical Hadestown on Broadway. The director at the Kitchen is also female: Pirrone Yousefadah, associate artistic director at Rochester’s Geva Theatre.

All the grunting, furious action takes place in the ring, designed by Seth Reiser. The speeded-up clang of the bell takes us in and out of rounds in rapid succession. Jay is taking on a challenger, the hapless Fish (DazMann Still), perhaps 80 percent of his weight and reach. Their stomping feet on the ring’s canvas floor signals the smashing blows.

With his shaved head and supreme body builder’s physique, Jamal James gives the protagonist a dominating and intimidating presence. Although the men are standing a few feet apart, we see the power of the thrusting glove and also the register of disruption and pain on Fish’s face. One might call this mime if the word did not sound so effete. Credit instead the expertise of movement director Rocio Mendez.

The most significant obstacle that the playwright has given us is his unfortunate title, which ranks with David Mamet’s college drama Oleanna in curb-view obscurity. No, The Royale is not about a strip joint in Montreal. We do not learn until well past the midpoint of the 70-minute drama that the title refers to a moment in African-American history that even specialists are unlikely to know. Muscular black men would compete in boxing elimination contests until only one was standing. This was not to advance their careers but only to amuse the white men who were paying what negligible bills there were.

Which gets us back to legend. Playwright Ramirez, the Miami-based son of white Cuban immigrants, says he was moved to write The Royale by seeing Ken Burns’ documentary Unforgivable Blackness (2005), based on Geoffrey C. Ward’s book of the same title. To prepare he saw several August Wilson plays and studied them, none of which touch on Jack Johnson. By giving the boxer a fictional name, the playwright links him to so many other black athletes famed for their excellence, like Jesse Owens and Jackie Robinson. Up close, of course, they are all highly individual, with Owens and Robinson being admired rather than controversial.

Unlike The Great White Hope, where the protagonist’s name is also altered to Jefferson, the fevered enmity of white America, especially of interracial sexual relationships, is not of prime concern. Instead, the one white character Max (Sean Meehan) is anything but a villain. In the larger scheme of things, he’s an asset for the boxer. His handlebar mustache, more than his comments, set the action in the first decade of the last century.

But his casual, perhaps unconscious, demeaning remarks about color and race are low-keyed but abrasive reminders of how white America saw things. With a slight change in the pitch of his voice, Meehan also gives us all the other white characters, many of whose attitudes are like Max’s.

In his dialogues with the other black characters, the boxer’s tensions become more existential and cultural than political. One of them is consoling, the trainer Wynton (Alexander Thomas), who could as well be a shrink or a clergyman. Thomas is the most significant Kitchen Theatre veteran in the cast; he has taken a wide range of roles over the years, and also writes the program notes, ordinarily the message from artistic director M. Bevin O’Gara. He speaks for weighty history.

Another character is a moral challenger, the boxer’s sister Nina (Shakespearean Lisa Tharps, new to the company). Is Jay only out for himself? Will he discard all that he has been to move from being the black heavyweight champion to the All-American champion? Will he pay the price? What about the others?

The brilliance of The Royale is that it gets audiences to confront a profound theme in a new way. The abominable treatment of millions of blacks is the greatest sin of America, but hearing about it again is not what audiences want to do in the theater. Anti-black discrimination might be cited, but it is peripheral noise: What we see here is what a struggle it must have been to break free.

Meanwhile, Kitchen audiences will be impressed by the magnificent Jamal James in the lead, the right man in the right place, a fighting machine whose greater struggle is introspection.