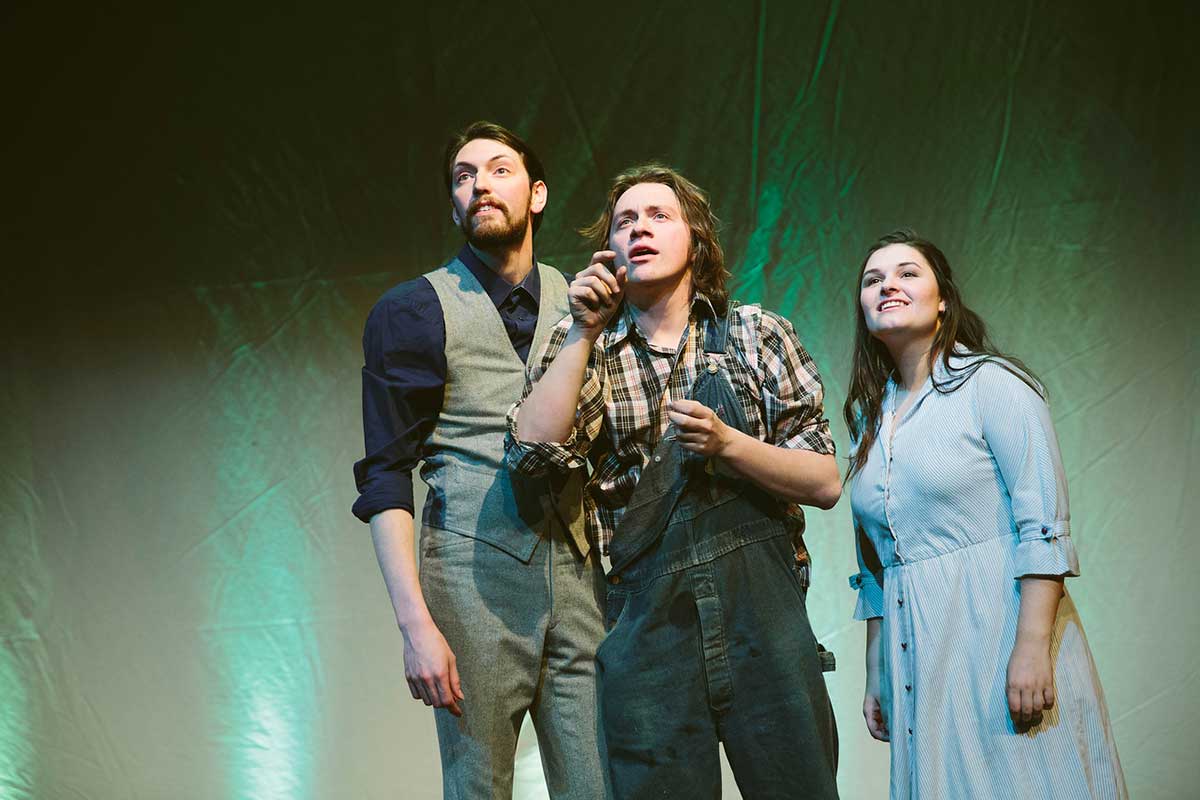 The emotional heavy-lifting in “The Diviners,” on stage through March 16, is carried by Derek Powell as the ex-preacher and Isaac Betters as Buddy.

Jim Leonard’s The Diviners is the rare drama that began as a college project in 1979, went to Circle Repertory in New York City and was then performed widely. That campus is Hanover College in southern Indiana, whose other show-biz distinction is having produced Woody Harrelson, who appeared in a revival of The Diviners there. Hanover is a Presbyterian school in a northern swath of the Bible belt. Many locals speak in an accent sounding more like nearby Kentucky than, say, Indianapolis.

A knowledge of biblical references and symbolism will aid audience members, as The Diviners (running through March 16 at Baldwinsville Theatre Guild) is festooned with them, starting with the name of the hamlet where the action takes place: Zion. The title The Diviners may not be biblical, but it points to the same direction.

In rural America “to divine” used to indicate an inexplicable ability to find underground water, which is indeed the focus of the first half-hour. Do we have faith in divining? A crabby older woman, Luella (Marcia Mele), doubts the ability and is marginalized. The word, of course, hints at the supernatural: perceptions beyond the human. And it is plural, diviners, signaling the theme of searching. Along with this, there’s a lot of talk in the play about what constitutes sin, such as dancing and boozing.

It’s the depths of the Depression. The much-reviled Herbert Hoover is still in office, and Prohibition, also unpopular, is the law of the land. The dialogue begins with two townies, farmer Basil Bennett (William Edward White at his most ominous) and field hand Dewey (Cole Salo), anticipating the conclusion of the play. That doesn’t make The Diviners a memory play, but a recounting of events is sure to lead to an unhappy end.

When Buddy (Isaac Betters) appears, we immediately sense that he is what would have been called “touched” in less enlightened times. Illiterate and given to wild gesticulation, he also suffers from neglected personal hygiene. We often see the bottoms of his slate-hued bare feet. He pulls at his dirty hair and is constantly scratching. Worse, he’s afflicted with ringworm that can only be treated with cold baths, impossible with his hydrophobia.

His family name is Layman (i.e. the laity), but he is the one gifted with the power to find water, the first diviner. And he does, on Basil Bennett’s farm. (Credit the real dirt and real water to set designer Josh Taylor.)

A few minutes after this enters an enigmatic, well-dressed stranger, bearing the portentous name of C.C. Showers (Derek Powell) and wearing a neat, three-piece gray suit. Turns out he’s an ex-preacher, penniless and looking for work. He takes an immediate liking to Buddy, and finds work as a mechanic in the garage owned by Buddy’s father, Ferris Layman (Josh Mele, never before looking so proletarian).

Buddy’s comely sister Jennie Mae (Noelle Killius) looks for a moment to be a romantic addition to the plot. But we are repeatedly told that she’s too young for the ex-preacher.

Instead, other women take over the action and supply what comic relief there is. Store owner Norma Henshaw (Kathy Egloff, full of vinegar) wants to bring an old-fashioned revival to town; she thinks that Showers might be a change agent sent from God. Cohort and diner owner Goldie Short (Renee Abstender Marchak) yearns to see the local church rebuilt. Their fund-raising scheme relies on a large jar of jellybeans, inviting those with money in hand to guess the total number contained.

Showers keeps insisting he’s given up his vocation, but the women will not pull back. In the playwright’s trenchant criticism of small-town Protestantism, the women’s larger goal is to repress sinful dancing rather than show some charity to Buddy, the village idiot.

The emotional heavy-lifting in The Diviners is carried by Derek Powell as the ex-preacher and Isaac Betters as Buddy. Tall, thin and august, the movie personage Powell most evokes in John Carradine, who readily portrayed men with spiritual dimensions.

Betters has been on a roll recently, coming close to stealing Central New York Playhouse’s uproarious It’s Only a Play last spring. Although his Buddy has to repeat some telling gestures such as scratching, Betters is always pushing the limits, implying that the boy is a bit feral and dangerous, like the young Leonardo DiCaprio in What’s Eating Gilbert Grape?

New-face director Krystal Osborne delivers some of her best work with Buddy and Showers’ bonding, first when dipping their feet in a flowing stream, an evocation of Jesus’ visit to the River Jordan, and subsequently in Buddy’s tragic immersion.

Although The Diviners has appeared twice before in the Syracuse New Times’ purview, scheduling it now, 40 years after its opening, represents a risk for Baldwinsville Theatre Guild. Director Osborne brings impressive national credits in different genres. In her program note she thanks her “family” at Tanner Efinger’s Breadcrumbs Productions, first noted with the little-seen original drama The Picture of Oscar Wilde in September. Rumor has it that Breadcrumbs, Osborne and members of The Diviners’ production team will have expansion plans in coming months.