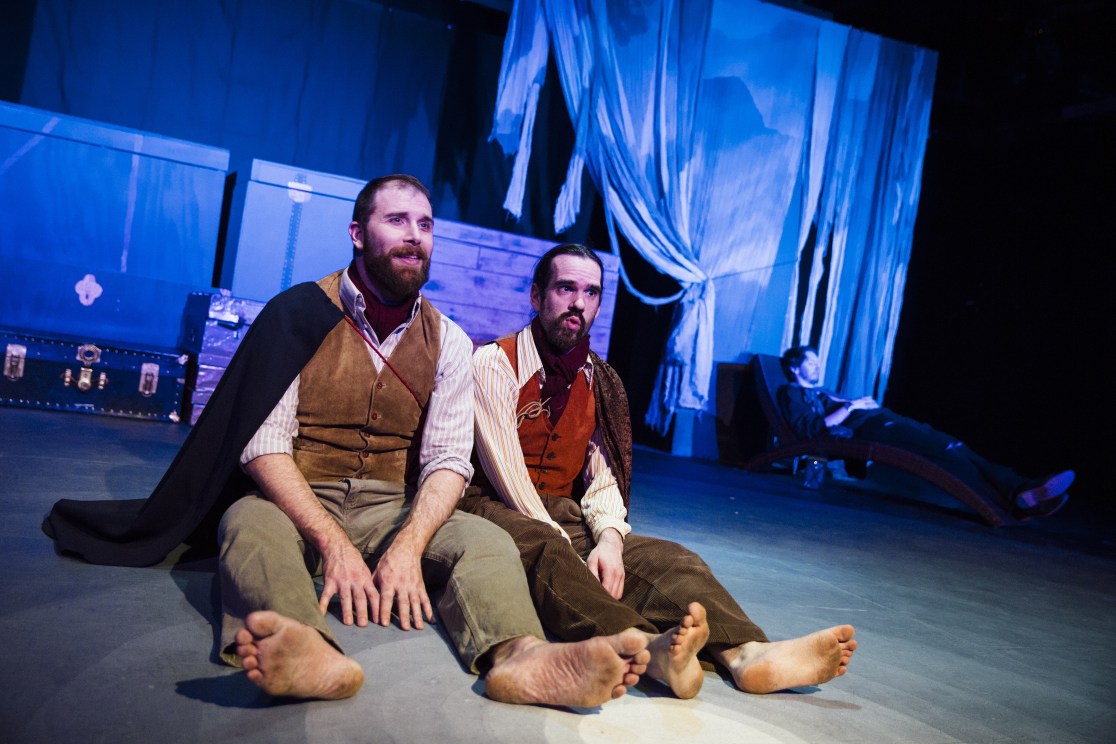 An early review described Tom Stoppard’s Rosencrantz and Guildenstern Are Dead as “Waiting for Godot with more laughs.” The show, which opened when the playwright was 28, is that uncommon modern drama more often read than performed. So many undercurrents of meaning, so many words calling for close attention.

Getting laughs with a show that runs nearly three hours calls for passionate commitment from the director and cast, which is delivered at the Central New York Playhouse production, running through April 27. Alyssa Otoski Keim, making her local directing debut, says R&G is her all-time favorite play, and that she’s long wanted to get this on stage. We can tell.

Otoski Keim, who trained at the Moscow Art Theatre, has been a distinctive presence in her short time as a performer on local floorboards. There’s a Meryl Streep-like (really) ability to look entirely different at each outing, such as the title role in Eurydice, the contacts-losing bimbo in Noises Off, the mannish Miss Casewell in The Mousetrap and Lucy of the delectable neck in Dracula. Inhabiting such contrasting personae can be seen as a warm-up for R&G, which interrogates many of the themes of Hamlet, as seen from the wings.

Anyone not knowing that tall Rosencrantz (Tallon Larham) and shorter Guildenstern (Basil Allen) are minor characters in Shakespeare’s Hamlet, and that Stoppard’s title is uttered in the last scene of that play, will be at some disadvantage. Despite the title and the character’s names, we learn only gradually that this is a metatheatrical gloss on Hamlet, quite a startling innovation at the play’s premiere in 1966. The approach is hardly commonplace, but it is similar to that of Taylor Mac’s Gary, now just opening on Broadway, and Shakespeare’s Titus Andronicus.

It’s not necessary to have seen or read the Shakespeare original recently to keep up with the pace. A good part of Hamlet’s prestige is built upon the universality of its themes — fate, destiny and moral decisions — as well its inexhaustibility. They can be revisited constantly without being worn out.

The famous opening sequence remains highly inviting. The boys are flipping coins to test the odds, and they keep coming up heads, 85 times in a row. Increasingly conscious that they are violating the laws of probability, they speculate on what other forces may be at play. Without surprise, then, they continue with the coin up to 92, always with the same results.

In other productions, the two title characters are played as two sides of a coin, or as indistinguishable as the twins in The Comedy of Errors. Otoski Keim not only sets them apart by physical type but also body set and heat. She drives them hard over what must be more than a hundred pages of dialogue, never flagging in articulating and shaping every word. Larham’s Rosencrantz is cooler and more accepting, whereas Allen’s Guildenstern is given to slow burns and resistance. This does not deny the running gag of calling themselves by each other’s names (have we remembered?) or having other characters in the cast confuse them.

Those other characters include a dark-browed Hamlet (Derek Powell), a somewhat operatic Claudius (Bill Doolittle), naïve Ophelia (Cassie Angerosa), decadent Gertrude (Kristina Rusho), and doddering Polonius (Phil Brady). Each one of these has moments of fun, with Powell’s Hamlet gaining the most, of course. Usually seen as a forthright leading man in 1984 and The Diviners, Powell bursts forth with previously unseen leaps of physical comedy. At other times his Hamlet is a disagreeable brat, and such a disposable figure he can go over to the corner and sleep, letting the boys carry the show.

Instead of Hamlet, the third most important figure is The Player (Strange David Fuller), after the Player King of Shakespeare’s play. He’s the one who puts on The Murder of Gonzago, the play-within-the-play to catch the conscience of the king (talk about metatheater). Fuller has been notable before, such as his Christopher Wren in The Mousetrap, but has not in our experience been such a dynamic presence. Some of this comes from the way costumer Liz Stanistreet and Otoski Keim have dressed The Player, with long ponytail, women’s high-heeled boots and crimson-painted nails, sort of a hermaphrodite dominatrix. To this profile Fuller adds Medusa-like glances and stentorian diction.

Fuller’s Player leads the most fun in R&G with the madcap staging of Gonzago. It’s impossible to give all the credit that’s due as some of the clowning is performed by the ensemble, called inappropriately “Tragedians,” whose names are not assigned to different actions. Even though we do not have the names, Otoski Keim has shaped and individualized each performer so that even when the action is most frenzied, each step is choreographed. Some of the ensemble also take on smaller parts from Hamlet, such as Fortinbras, the ambassador from Norway.

About this time a character named Alfred (Max Smith), first seen as an oversized baby, dons a dress, wig and lipstick. No need to worry if you don’t remember an Alfred in Shakespeare’s play.

Otoski Keim’s commitment to this project, produced by Michaela Oney, extends to the ingenious scenic design, with a row of heavy but backless wooden boxes to be used in the second act. Through them the ensemble appears and disappears.

The director gains a valuable assist from recent Syracuse New Times Syracuse Area Live Theater (SALT) winner Isaac Betters as the sound designer. He picked out the accompanying music from a variety of sources, in which the Harry Warren golden oldie, “That’s Amore,” wittily glides into a Dmitri Shostakovich string quartet. Such is this production’s level of invention.

Handle With Scares: Hitchcock, Spielberg, more at annual Salt City Horror Fest
A look back at the last 50 years of the Syracuse music scene (photos)
To Top