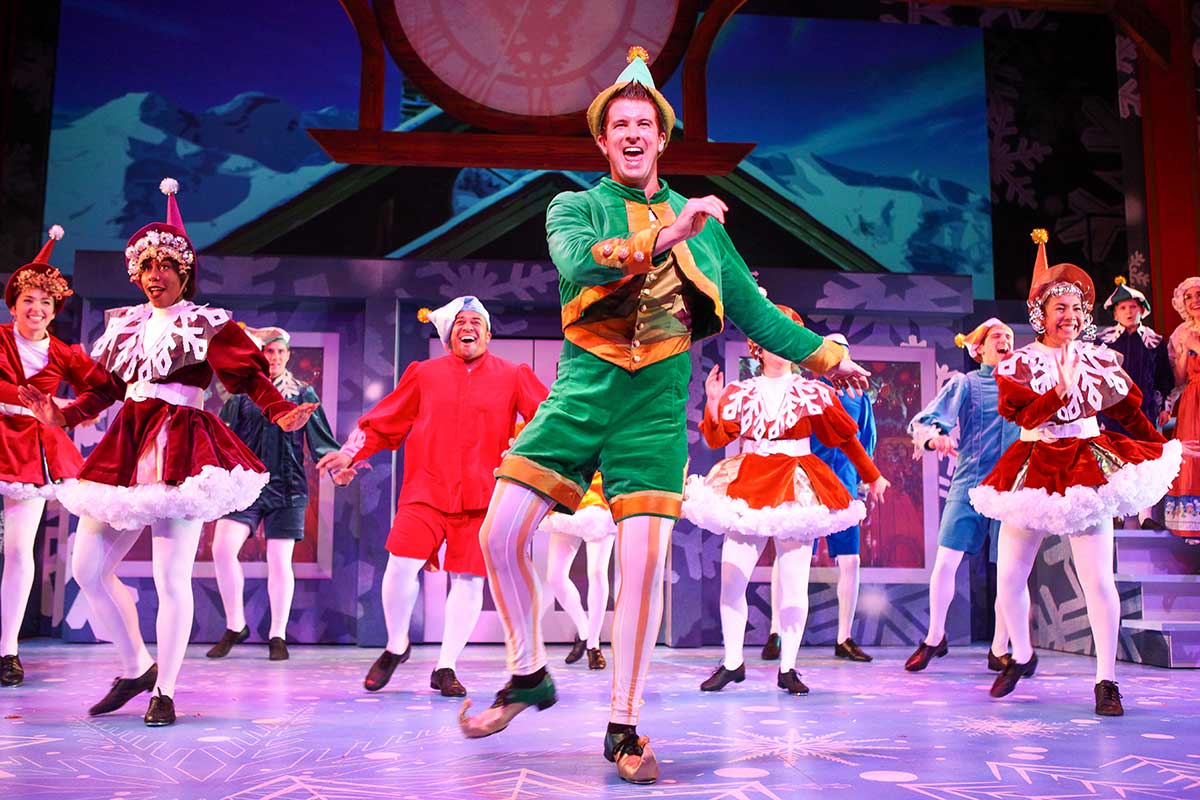 The first thing the annual holiday show at Syracuse Stage has to do is knock your eyes out. Thus, for Elf: The Musical (running through Jan. 6), Jessica Ford supplies 130 costumes, including some with shoe-like knee slip-ons suitable for elfish dancing. Scenic designer Czerton Lim comes in with constantly changing sets so that — whoosh! — we zoom from the North Pole to midtown Manhattan, the Empire State Building, Macy’s and the Rockefeller Center ice rink. And with the iconic gold statue of Prometheus looming above, members of the chorus are skating on the pond. Then, whoosh again, and we’re back into the fast-moving action.

Anticipation for Elf has been high, in part because of 18 years of successful holiday-time collaborations between Syracuse Stage and the Syracuse University Drama Department. Two immediate aspects of the show encourage confidence. Director Donna Drake, who helmed last year’s smash The Wizard of Oz, is returning. And Elf, with a score by Matthew Sklar and Chad Beguelin (known for The Wedding Singer), which opened in New York City in 2010, draws on the much-loved 2003 movie with Will Ferrell. It has become a yuletide perennial, keeping company with Jean Shepherd’s A Christmas Story and Frank Capra’s It’s a Wonderful Life.

There are a few changes from the movie, but nothing to worry about. The 2003 feature came before the advent of the iPhone, ubiquitous now, and is set at Gimbels rather than Macy’s. In both the semi-serious theme is accepting one’s own humanity, a familiar secular idea of Christmas since at least Charles Dickens in 1843. Putting profits ahead of people and betraying values for commercial advantage both come off badly.

Santa Claus (Jayson Elliott), the real dude, frames the story while relaxing in an easy chair and snapping his remote control. He’s also part of the first big production number, “Christmastown,” where indeed a company of elves are making toys for all the children in the world. The chorus, with those elf-shoe knee slip-ons, appear to be about two-thirds human height, which means that one of the company, Buddy (Chris Stevens), towers above them. This Buddy may not be 6-foot-3 like Will Ferrell, but he’s tall enough. He’s not like the others because he’s actually a human and so must travel south and find his birth father. Santa warns, “He’s been naughty.”

Scenic designer Czerton Lim evokes lightning-flash movements from scene to scene with projected images, many of them mottled photographs of actual Manhattan locations. Buddy quickly locates his birth father, Walter Hobbs (Aloysius Gigl, who bears a striking resemblance to the late George C. Scott, once a memorable Scrooge in a TV movie). Walter is a hard-pressed editor in the children’s book trade, not usually thought of as a cut-throat enterprise, but here it feels like commodity trading in pork bellies.

Despite Buddy’s celebratory “World’s Greatest Dad” number, things don’t go well. Father Walter is “naughty” because he just doesn’t have the Christmas spirit, and his son Michael (Seth Pagliaroli), does not believe in Santa Claus. Mother Emily Hobbs (Allison Mickelson), however, allows that Buddy might have an opening into the family. The family is in the office along with Jill-of-all-trades assistant Deb (Celia Madeoy) joining in as Buddy puts on a business suit and works to fit in to the company mode.

Although Buddy is nominally in search of his father, he is also an emissary from Santa’s Workshop and an innocent in the Big City. Fluffy as the show may seem, Buddy has impressive antecedents, from at least Voltaire’s Candide and Herman Melville’s Billy Budd. The distinction here is that he is not buffeted by cruelty and greed but is a change agent, the Johnny Appleseed of joy. (Celia Madeoy, left, and Chris Stevens, right) Once in Manhattan, Buddy is determined to get everyone into the Christmas spirit. (Michael Davis/Syracuse New Times)

The task for Chris Stevens in the title role is not to come off as a chuckle-headed fool. Stevens, who’s in almost every scene, evokes the invincible guilelessness Ferrell brought to the movie. The script also sneaks in moments of wisdom in his folly. When told about his humanity in Santa’s Workshop, Buddy asks in astonishment, “You mean I’m an orphan?” and breaks into a few bars from Annie. This stage adaptation was co-written by Broadway veteran Thomas Meehan, who also wrote Annie a generation ago.

When the scene shifts to Macy’s we can never quite forget the resonances of Miracle on 34th Street and David Sedaris’ The Santaland Diaries. On the upside, justifying the store’s use of its good name, we have the big production number “Sparklejollytwinklejingley,” with strong support from the boisterous Macy’s manager (Chaz Rose).

More to the Sedaris side, Buddy comes across a downcast employee named Jovie (Rachel Mracna, the top role given to any SU Drama student). She becomes Buddy’s love interest, and although their story is not especially compelling, Jovie is given the most affecting solo in the show, “Never Fall in Love.”

Back to the plot. Walter’s publishing enterprise is going to smash when a Dickensian villain, Mr. Greenway (David Lowenstein, last season’s Wizard of Oz), comes up with an ultimatum: either produce a blockbuster book or the company is over — and on Christmas Eve. The absurdist attempts to come up with such a book provide some of Elf’s best laughs.

Despite Brian Cimmet’s superlative music direction and Brian J. Marcum’s visually exciting choreography, Sklar and Beguelin’s score is not one of Elf’s assets. Few audience members will recall a single song the next day. But many are highly effective on stage. One of the wittiest is “Nobody Cares About Santa,” in which unemployed fake Santas lament that their time in the public’s affection has come to an end.

In this co-production with SU Drama, student actors take care of much of the heavy lifting, playing multiple roles with instant costume changes. Outstanding are Crawford Horton in several parts, including a fake Santa, Kayla Mattocks in four roles, especially the main skater, and Caleb James Grochalski, Michelle Arotsky and Markcus Blair.

Many of the holiday shows have been gussied-up perennials, like The Wizard of Oz. But Elf, a show written in this decade, starts a new tradition at Syracuse Stage