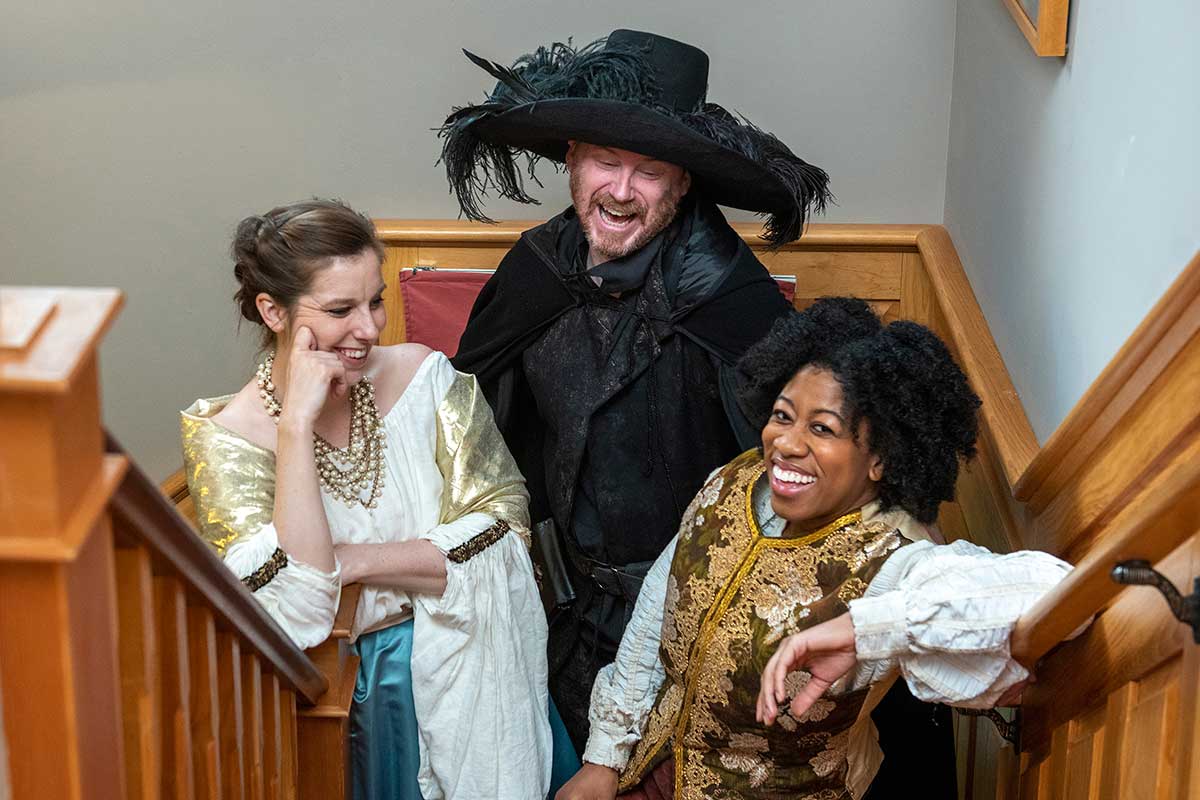 The life of the English theater’s first woman playwright Aphra Behn (1640-1689) was so fabulous it almost feels invented. Along with being the first professional woman writer of any kind, she traveled with royalty and served as King Charles II’s spy. Born in a remote South American colony, there was always some question of what her actual name was or whether she forged her resumé. Refuting the Puritanism of the previous regime, her plays always pushed the edges.

The management of her sensational private life could have taught a thing or two about managing lovers to Helen Gurley Brown or Carrie Bradshaw. And as demonstrated by Liz Duffy Adams’ play Or, What She Will, running through Saturday, June 22, at Ithaca’s Hangar Theatre, Behn could be enormous fun.

Behn has by no means been forgotten. The Syracuse University Drama Department staged her comedy Sir Patient Fancy to acclaim a while back. Top feminists like Virginia Woolf and Germaine Greer have canonized her. Adams’ play takes her back to the streets, often speaking in the rough language of a David Mamet character. Behn’s adventures were not always glamorous, as action begins when she is sprung from a squalid debtors’ prison. The constant tension driving her through 90 minutes without intermission is to get the next manuscript done. She wants to break in, a “Sappho of the modern stage,” with one of only two London companies, a tight market.

The original title of the play at its 2009 premiere was simply Or, which proved both ambiguous and unmanageable in subsequent years. The What She Will portion underscores the playwright’s intention to mimic the conventions of Restoration comedy, especially Behn and her contemporaries William Congreve and George Farquhar. These include witty, aphoristic, often rhyming dialogue, exaggerated characterization, and raucous action.

The character of Behn (played by Emily Kunkel) begins by breaking through the fourth wall with an explanation of the show’s original title. We will explore opposites, dualities and the nation that those opposites can coexist. As she says, “We all embody opposites within, or else we’re frankly too dull to live.”

Kunkel always plays Aphra, even with a costume change on stage. Two other players, one male, one female, will take on multiple roles. The first is a shaggy, bearded, dangerous-looking Jailor, who might have been sleeping in the latrine (thanks to costumer Suzanne Chesney). The Jailor is slow to speak and we have to wonder which gender this one is. When a dulcet female voice emerges we realize it is Ashley N. Hildreth, but this kind of peek-a-boo, which-isit game will keep recurring.

Next is a tall, bewigged figure in hyper-dandified dress, ribbons and satins, with one foot thrust forward, as if posing for a royal portrait. He’s wearing a barely-there mask and speaks portentously (thanks to dialect coaching by Syracuse University’s Celia Madeoy). He is revealed to be Charles II (Austin Jones), the Merry Monarch himself, whose Restoration after the joy-hating Cromwellians defines the era. Historical record assures us that Behn was indeed Charles’ paid agent, but playwright Adams would have them sharing intimacies as well. They kiss, promising more.

No matter how little audiences remember of the 17th century, they are likely to know that ladies’ man Charles’ favorite bed partner was actress Nell Gwynne, the most famous royal mistress of all time. It’s Ashley N. Hildreth again, provocatively dressed as a boy at her entrance, but all girl. Instead of the flattering, submissive tart one might have expected, this Nell is an impish spitfire who turns the king on by talking dirty. Her manner also lures Aphra, and they kiss, with promises of more to come.

Later Charles and Nell find themselves together behind one of Aphra’s doors, and not surprisingly they too fall into an embrace with heated kisses. It’s a buzzing polyamorous love triangle.

The remaining six visitors again make the two supporting players look completely different. Blond William Scott (Austin Jones), wearing a black mask and looking like Zorro, is an ex-lover, a fellow spy, and may be in on a plot to kill the king. Aphra in life was thought to be a Roman Catholic, and Scott is a champion of Charles’ Catholic brother, who eventually did become King James II. In the short run he’s looking for a pardon.

In a change of costumes and wigs, Hildreth returns as the loyal servant Maria, conspicuously lacking some front teeth. Also conspicuous is Maria’s voluminous booty, which she wags in a sustained exit. In a show with so much verbal humor, director Morgan Gould also emphasizes physical humor.

All thus culminates in a character who may have no historical antecedent: pompous Lady Davenant (Jones again), purported owner of a London theater. Coming in the last 20 minutes of the action, Lady Davenant’s panache (with a pink feather on top) steals the show. Jones keeps the florid costume in constant motion, including the feisty dogs kept on a stiff leash. In this feminist comedy with a female director, the Ithaca College drama professor cannot be topped.

Playwright Liz Duffy Adams has been on the scene for more than a decade, and has been flooded with awards. Her inventiveness and exuberant humor may remind audiences of the Ithaca-raised Kate Hamill, known for Jane Austen adaptations. Her real peer, however, may be Tom Stoppard of Travesties, with a lighter, more generous humor.