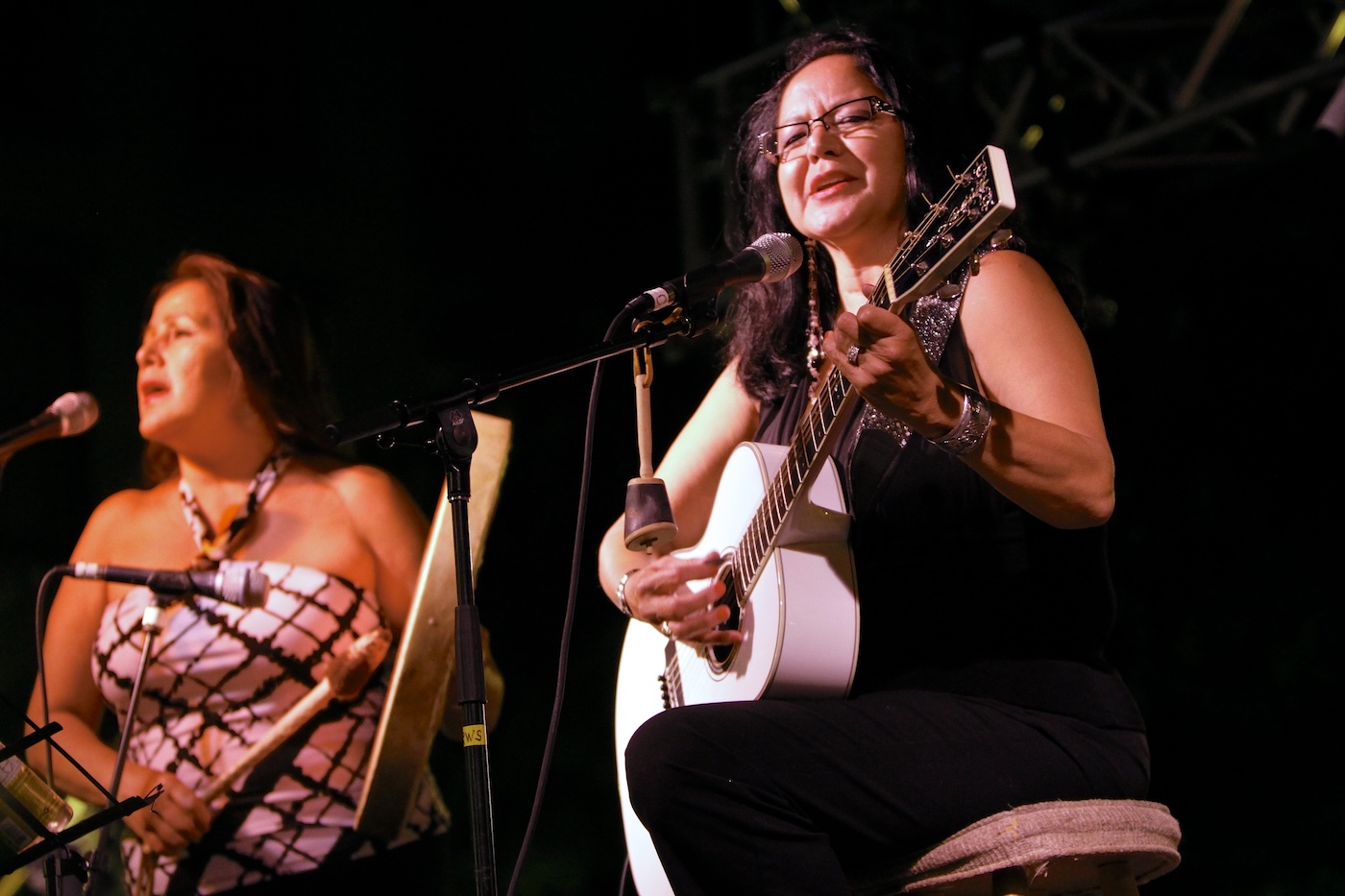 Lilith Fair is a vague memory for me. I was a 10-year-old classical violin student, not yet a musician, when the first event happened in 1997. Yet I distinctly remember being fascinated that a bunch of female musicians were playing a show together.

Part of that fascination was simply because I didn’t understand that women played popular music. This is a horrible thing to realize, but as I tried to put the pieces of my memory together, I knew it was true.

Fast-forward to now. After 10 years of music journalism and countless bills and festivals I’ve been on, I can safely say that 95 percent of my stories were about men, and those festival stages were filled with men. No wonder a young girl would have this vision.

I was brought up on Kool and the Gang, Jimi Hendrix, Cream and Jaco Pastorius, thanks to my bass-playing older brother. I loved music and desperately wanted to play the violin like Hendrix played guitar, although I was told I couldn’t. I didn’t see any female role models to base myself after. That didn’t bother me. I was used to following my two older brothers around in everything else, so why not music? I didn’t see gender. I saw people who rocked and made music that moved me.

It’s only in looking back that I realize how important it is to make sure that limited view doesn’t continue. I’m proud that companies like the School of Rock demonstrate daily that women are equal to men in music. I saw it firsthand when the girls picked up the bass, guitar and drums, just because they wanted to. And they excelled because no one told them they couldn’t.

Lilith fLair, held Sept. 9 at Eastwood’s Palace Theatre, is another step in that process to erase the gender norms we all have grown too comfortably accustomed to.

To understand Lilith fLair, first you must understand Lilith Fair, the 1997 touring festival with artists like Sarah McLachlan, Sheryl Crow, Fiona Apple and Paula Cole. The point was to prove that a music bill featuring women could still sell tickets — and they did. And “Lilith” came from the biblical figure Adam was attached to before Eve. But Lilith wanted to be respected as an equal, something Adam couldn’t provide, so she left. (What an incredibly appropriate feminist figure!)

The goal of Lilith fLair was to put local women on stage who not only sang, but wrote their own music. I don’t think people realize the importance of this distinction. As Joanne Shenandoah put it, writing and playing a song is equivalent to sharing a piece of your soul. It wasn’t about acting a part, it was about doing the opposite, even as women performed their idols’ music.

In my view, it’s a different approach. I didn’t sing “Criminal” by Fiona Apple in an effort to be her, but rather to express my interpretation and admiration of her.

There were many incredibly well-done aspects of the night. I loved the natural flow of the show. A huge variety of genres and styles were touched upon, and men and women both floated around the stage playing different instruments and roles. I also loved that women not only performed in the show, but also did the managing (Gia Palermo, Carol Thoryk-O’Leary), marketing (Kim Rossi) and photography (Misse Thomas). And I most loved that people started to recognize something that every songwriter desperately wants them to know. I was told by a friend in regards to one music act, “The covers were OK. But when she sang her own song — I was blown away.”

Isn’t that it in a nutshell? When we all fall into the person we actually are — no imitating or paying tribute — just fully embracing the art we make, that is felt universally because it is real on the deepest level. While many people do something like that through the covers they perform, I was happy to see someone fall in love with an original song because they were falling in love with the person at the same time.

I was moved to tears so much that night. The moment Amanda Rogers began “Nothing Compares to You” I melted to a puddle. When the videos between acts came on and Sarah McLachlan talked about the hurdles she had to overcome and Sheryl Crow talked about the spirit of the audience, cheering as they left the venue, I was moved at my core. These were the battles that paved the way for me, for the performers that night and for women everywhere to be where we are today.

However, we’re not all the way “there” just yet. Gender stereotypes and discrimination are still present and, unfortunately, often more shrouded, malicious and even protected than people realize.

I say this because I am consistently amazed at the sexism I’m faced with, especially by people who say they are advocates for equality or who love and respect women. It’s the sly comments about what women “wear or don’t wear” on stage or when assumptions prevail. It’s the people who immediately say, “Must be the singer,” that the instruments are props, or that I must be carrying gear for my boyfriend. Think for just a moment how insane it would be to walk up to a man carrying a guitar and say, “Aw, you must be carrying that for someone. How nice! You must be the singer.”

It was also interesting to read a different perspective recently, that women allow and feel comfortable in these stereotypes, which can be true. But I’d like to think, and hope, that time is ending.

I loved Lilith fLair because it addressed these concerns and stereotypes in the most positive way: by putting on a show like this despite them and by succeeding in bringing a truly fantastic night of music to life. I’m a tough critic. I don’t praise where it’s not due and I don’t give lenience because I’m a proponent for women or anyone else. I believe in equality, not gifts to people I like. In that spirit, I thought so much of the night was special, but a few moments stand out:

In my own performance, I felt overwhelmed. There was not only a feeling in the air, but within me as I played, especially “Counting On Love,” a song I wrote last November after the national election. I wrote the song because I was tired of the hate that was seemingly everywhere. I was tired of being talked down to, tired of being attacked and tired of people not just disagreeing, but hating.

Then I heard soul singer Jesse Dee say in a performance, the night after the election, “You can’t fight hate with hate. You can only fight hate with love.” That’s when it all made sense. I listened to “Imagine” by John Lennon and “Counting On Love” was born in minutes. I modeled my song after one that doesn’t take a side in a condemning way, but in a way that shows we all have more in common than we think. I cried as I wrote it.

Later on, I knew as soon as I was approached about this show, by mastermind and Wonder Woman Gia Palermo, that the song needed to be part of it. With a line like, “I’m just a little girl / but I’m gonna change the world,” I had to share. Furthermore, Joanne Shenandoah said something to me that confirmed that thought even more. She mentioned that John Lennon wrote “Imagine,” such a powerful song, but why John Lennon? Why a man? Why not a woman? Well, maybe we will. Maybe we are.

Recently, I recorded “Counting On Love” in the studio with my band and with guest singers Ashley Cox and Jessica Brown, further pushing the feminine power of the song, although it absolutely applies to anyone and everyone. I’m so proud to feature them on a song that was aching for their voices and I’m so grateful so much of the community has heard the message of the song. It is a tremendous feeling.

In this long and winding piece, the point is that it wasn’t so long ago that women were barred from something as simple as sharing a bill together and little girls didn’t even know that women played popular music. The point is that sexism is still alive and well and we need to be aware of that to defeat it. The point is that this event proved the power of women, and not in a conventional way. It’s not about who can play faster or louder, it’s about who can move you. Here’s to all the women who did.