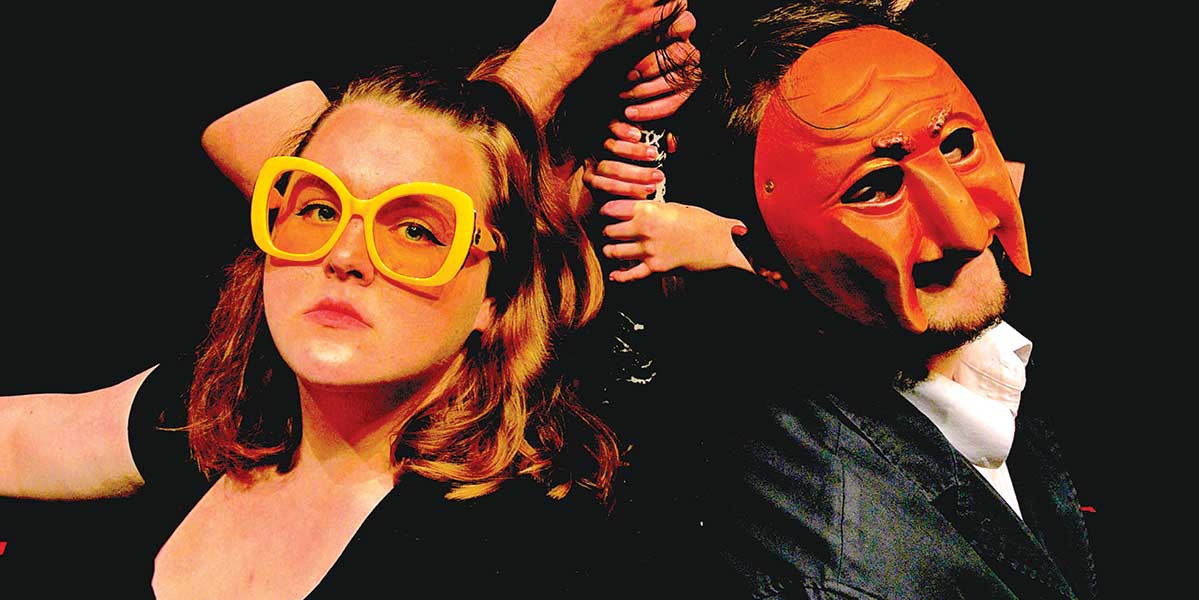 Le Moyne’s Boot and Buskin theater club restores the edge “The Visit” once had during its 1956 premiere as a dark satire.

In his wistful curtain speech for the Boot and Buskin Theatre Club’s current production, director Matt Chiorini allowed that the impulse to mount Friedrich Durrenmatt’s The Visit (running through Saturday, April 6) came from deep within. He acknowledged that many recent shows at Le Moyne College’s Coyne Center for the Performing Arts, including broad market comedies and musicals that have been popular with performers and audiences, had high artistic merit and were worth doing.

But in his heart of hearts, Chiorini wanted to be in a warehouse somewhere in Eastern Europe. Without being specific, it was not hard to tell that he was thinking of the Berliner Ensemble (OK, Central Europe), home of the Epic theatre movement and a celebrator of the works of Bertolt Brecht.

Durrenmatt (1921-1990) was Switzerland’s leading playwright of the 20th century, a distinction not unlike being the tallest building in Delaware. More important to his critical standing is that he was a leading proponent, along with Brecht, of Epic theatre, an Expressionist movement that refutes any pretense to realism. Players often wear masks and break into song when the audience least expects it. Far from being highbrow or elitist, Epic theatre is usually accessible, filled with surprises and invites laughter more often than scorn. It also confronts, asking you to think along with being entertained.

Following his heart of hearts, Chiorini is taking The Visit back to its roots. The German title, Der Besuch der alten Dame (“The Visit of the Old Lady”), gives away a bit more of the substance: An older, very successful woman comes back to a remote town to see her first lover. Whereas the play has been adapted dozens of times, including The Hyenas (1992), one of Senegal’s best-known movies, it has been somewhat misrepresented in the English-speaking world. Maurice Valency adapted it for Alfred Lunt and Lynn Fontanne, the once-famous stage couple, who also inspired Cole Porter’s Kiss Me Kate. Ingrid Bergman and Anthony Quinn appeared in a dour 1964 movie version. John Kander and Fred Ebb used it as the basis of one of their less successful adaptations, a 2001 vehicle for Chita Rivera.

Yet The Visit was hailed as a satire, albeit a very dark one, at its premiere in 1956. This production restores that edge, without spoofing the Lunts, Kander and Ebb or anybody. Clara Wascher Zachanassian (Maggie Flower) is one of the world’s richest women. As a teen, she was seduced and left pregnant by Anton Schill (Andrew Kedick). Now she has returned to her shabby, hard-pressed hometown of Gullen with an offer sure to bring prosperity: She will give the townies 1 billion marks if they will off Anton and satisfy her vengeance.

Even in summary we can see that the premise is more allegory than likelihood, paralleling the works of Hans Christian Andersen and The Twilight Zone. Recreated in Epic theatre, the premise also presents two ambiguities. In old-fashioned leftism, Clara is simply a willful moneybags, John Paul Getty in a skirt. In the feminism that has grown so much more prominent in the 63 years since the premiere, Clara is a wronged woman, getting even with the exploitive pig who did her wrong. In 1956 Switzerland was the only European country in which women did not have the vote. Epic theatre provokes but does not preach.

Although translator Valency is credited in the program, and presumably his estate received a portion of the royalty to perform here, there is some question when many of his actual words are spoken on stage, especially in the first act. The general hilarity feels like improv, bordering on slapstick. We know that the townies represent a cross-section of society from partial costumes, like the Roman collar (clergy), mortarboard (academia) and top hat (business). The half-masks are also individualizing and fortunately leave the mouth and chin uncovered for unobstructed articulation.

Karel Blakeley, the company’s usual set designer, is cited only as prop master. Thus student Brittany Schafer has taken the assignment of production designer, a crucial component of the full expression. The mobile seating in the Coyne Center has been moved to the back as well as having been reduced. This means audiences enter through the wings of the production. Everything is made to look cheap and down market, evoking that “warehouse” of Chiorini’s curtain speech.

Instead of sets in the usual sense, we have sheets of white plastic stretched between two poles. Actors can write on them. When Clara makes her big entrance, her transportation is evoked by a bug sheet of black plastic with white markings on them. To break in, she just cuts through the sheet. For dramatic effect she could not have done better if she was carried in on a sedan chair.

The role of Clara is, initially, the only one without a mask. In seconds after her entrance Maggie Flower makes us forget that in life she is an undergraduate. She and director Chiorini were prudent not to mix whitener into her flame-red hair to make he look “older.” She achieves the effect with body set. A tattoo and a limp are more than enough to suggest a prosthetic limb. More importantly, she has the imposing presence of a boss lady, a force never to be trifled with.

With his mask removed, tall Andrew Kedik’s Anton is revealed to be vulnerable, a prospective victim, guilty or not.

The six members of the ensemble are never named in fluid, changing roles. At curtain time they should stand up for applause: Patrick Burke, Joey Cook, Anthony Dillenbeck, Alyssa Goudy, Megan Hill and Tyler Sternberg.