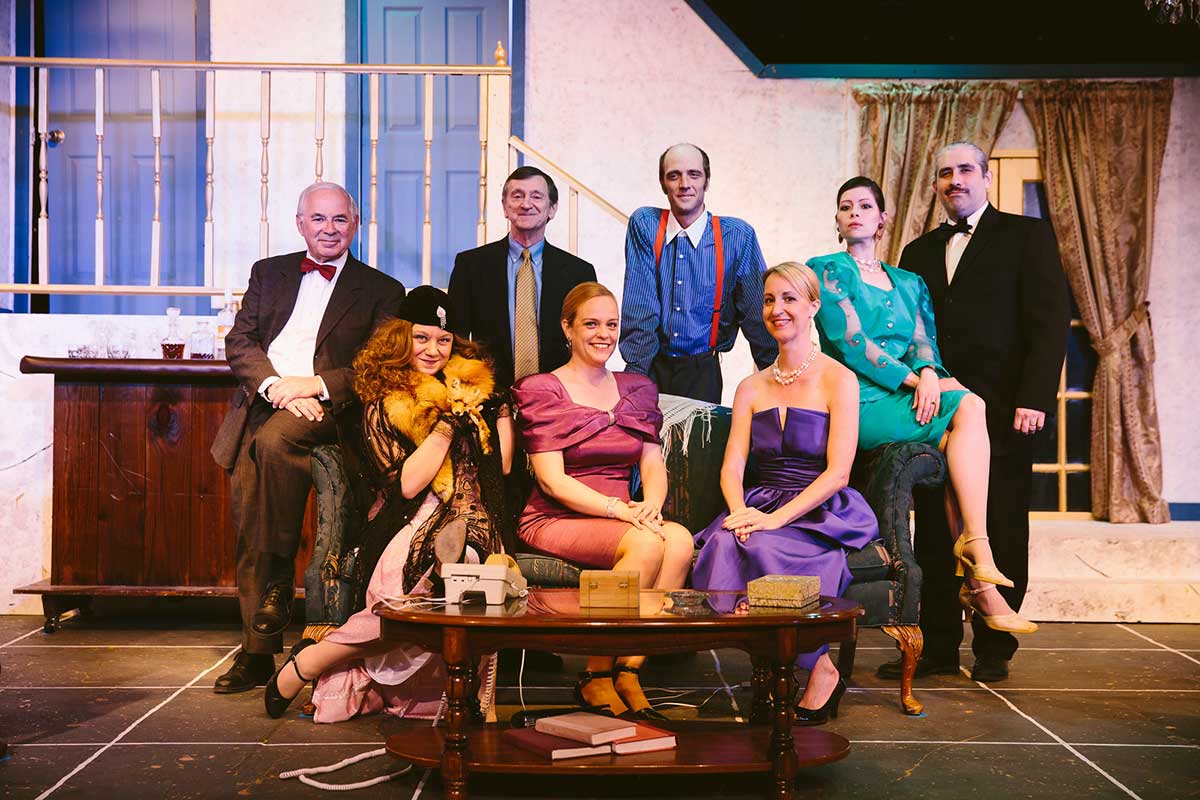 Revered Broadway playwright Neil Simon passed away last August at age 91, leaving behind a legacy too sizable to address in this space. Yet Rumors is a Neil Simon comedy that doesn’t feel like a Neil Simon comedy. It’s running through Saturday, June 22, at Shoppingtown’s Central New York Playhouse.

Thirty years ago when Simon’s name still meant box office gold, the master was nettled by carpers who sneered that he was writing the same formula over and over. To refute them he constructed, but also parodied, a classic farce on French and English models. That meant people of higher social station than the usual crew from Brighton Beach, heady pretension begging for humiliating deflation, blockheaded stupidity, madcap pace and doors. For this revival, William Edward White’s set design features six slammable doors as well as French double doors that sit there just tempting.

Somewhere in Westchester County in 1988 (no cellphones!), eight well-dressed people gather for a 10th anniversary party, at which no food or drink has been prepared and the hosts are never seen. Wife Myra is “away,” but she will be the subject of endless salacious gossip. Husband Charles lies offstage, suffering from a gunshot wound, apparently self-inflicted. The first guest to arrive, the excitable Ken Gorman (Josh Taylor), exclaims to his sleek wife Chris (Blair Dawson), “He’s bleeding like crazy all over the room! I don’t know why people decorate in white.”

The gag tells us we’re still in Simon idiom, but the dialogue reveals a new satirical edge as the other guests stream in, each embodying moral failures of the rich. People brag about the colleges they attended and the cars they drive (BMW leading the way). Appearances are all-important, well supported by Stephanie Long’s costumes. Even the defiantly out-ofstep Cookie Cusack (Chelsea Lembo), with a fox-headed wrap around her shoulders, boasts that her 50-year-old outfit is an heirloom from a Russian grandmother. Her self-important but clueless psychiatrist husband Ernie (Lanny Freshman) proclaims that he can explain it all, proving how little he perceives.

The evening’s power couple includes imposing Glenn Cooper (Matt Gordon), who is running for the Senate, and his eye-candy wife Cassie (Julia Jaremko). Only it’s the state Senate, inviting Cassie to start trashing the weather in Albany. Playwright Simon is so taken with their Punchand- Judy bickerings that he lets the Coopers dominate the stage for a while. Cassie’s rhetorical blows are karate chops, until she confesses a spiritual longing for crystals, a then-current craze.

Nearly as bitchy are Lenny (Jack Sherman) and Claire (Amy Prieto); their car was rear-ended, and Lenny’s head is held stiff as in an invisible brace. But expressive rubber-faced Sherman wins the prize by improvising a completely cockamamie explanation for two cops (Jim Molloy Sr. and Keith Arlington) regarding everything that did and did not take place.

This Rumors is a labor of love for director Korrie Taylor, who met her husband Josh (shouting Ken) in another version 11 years ago.