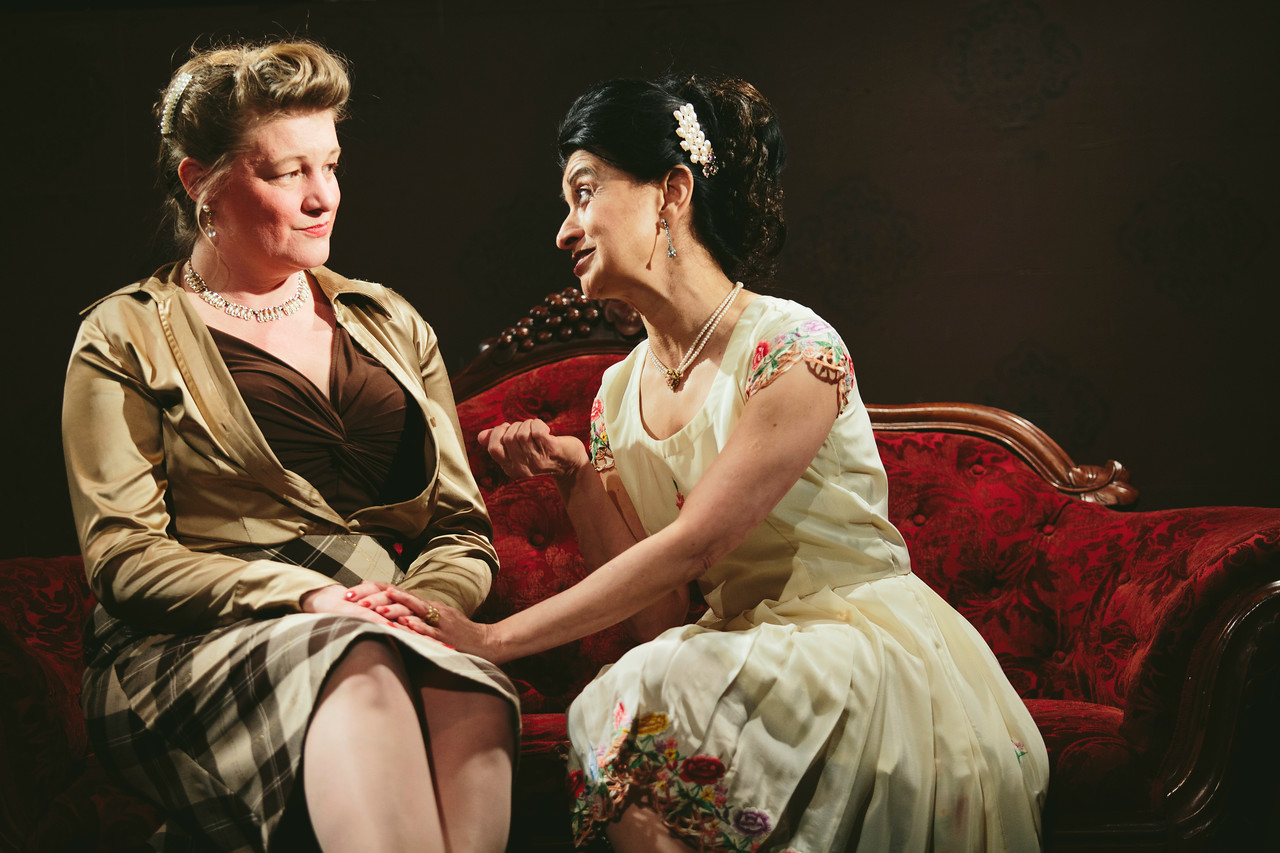 Toto, we’re not in Paris anymore. Choderlos de Laclos’ frequently banned novel Les Liaisons Dangereuses (1782) was set among debauched, intriguing aristocrats in pre-Revolutionary France. His name, however, does not appear anywhere in the program for this Central New York Playhouse production, running through Saturday, March 23.

Now considered darkly comic rather than dirty, and also in public domain, Liaisons has been adapted dozens of times and inspired the 1999 teen movie Cruel Intentions. British playwright Christopher Hampton produced the most admired stage version in 1985, changing the ending, but winning many plaudits. Hampton’s version also served as the basis of the 1988 movie Dangerous Liaisons with Glenn Close and John Malkovich. Then esteemed scenarist Jean-Claude Carriere adapted the novel for Milos Foreman’s rival 1989 film Valmont. Their names do not appear in the program, either.

Thus, it must have been director Dustin Czarny who tinkered with lines and snipped off noble titles to reset the action in New York City in the 1950s. Well, that saves money on perukes and knee britches, as cast members wear their own versions of upmarket costumes that imply the present rather than the Eisenhower era. It seems peculiar, though, that the characters communicate so much with written notes when telephones, even with dials, were functioning then. Rich people in the play may go the Hamptons, but they live in chateaux. When someone mentions a naughty English novel it turns out to be Clarissa (1742). Love, betrayal and vengeance, however, do not date.

Following its origins in the novel, nearly all of Liaisons’ exposition comes in letters, now longish speeches. This puts quite a burden on the two leads, the blonde and haughty Merteuil (Heather J. Roach) and her dark and supercilious former lover Valmont (Eric Feldstein). Their dialogues tell who’s who and who’s likely to get what, a great deal to remember.

As Roach and Feldstein are two of the company’s most familiar and reliable performers, and their characters are given juicy bon mots, it takes a while to realize their intrigues are not mere mischief. The liaisons they plan are indeed dangerous, and hurtful.

The contest is to ruin two virtuous women. Merteuil wants revenge on the guy who recently dumped her, so she takes aim at his fiancée Cecile (tall, thin Alicia Cobb Goodson, in a platinum wig), whom we have seen fleetingly under the protective eye of her stiff mother, Volanges (Binaifer Dabu). Merteuil suggests that Valmont would be just the Lothario to do the job, but he disdains such an unchallenging assignment as bedding a naïve girl, now a houseguest of his aunt, Rosemonde (Kate Huddleston).

Instead he argues that humping a virtuous married woman, like quiet brunette Mrs. Tourvel (Sarah Liebowitz), no longer a virgin but steadfast in her vows, is a worthier test of his abilities. If Valmont can prove his victory in a written statement, Merteuil will reward him with a night of her own favors.

Valmont’s progress is slowed when he learns that Cecile’s mother Volanges, also Merteuil’s cousin, is bad-mouthing him to the teenage girl. So he reverses what he said he would do and seduces Cecile after all, flipping the bird to both gossipy mother and the conniving Merteuil. Giving her rival an unexpected assist, Merteuil advises Cecile that sleeping with Valmont may not be such a bad thing after all, but rather a kind of, um, learning experience.

Cecile, meanwhile, is charmed by the music teacher Danceny (Jesse Navagh). His lower social station is immediately obvious in the book and in previous local productions, but in this Americanized version one has to infer his status from his conspicuously scuffed shoes. No slouch with the ladies, Danceny also attracts the amorous attentions of none other than Merteuil.

Meanwhile, back to Valmont and the married Tourvel. Against his worst intentions, the blade finds that he is falling in love with her (not the way to play the game) as well as knowing her carnally. Merteuil then mocks him for being a failure as a gigolo and refuses to reward him with her favors as promised — especially as he never had the written affidavit.

In a candid director’s note, Dustin Czarny says he took on Les Liaisons Dangereuses because he wanted to do something small, especially after the stage-crowding Mamma Mia! which just broke box office records. So he came up with a labyrinthine plot and more than 20 scene changes. This performance lacks the Wildean wit between Valmont and Merteuil of other productions, however, as well as the expanses of bare skin.

No one is credited with set design and construction, except for painter Margot Reed, but some credit must go to producer Christopher James Lupia. Rolling on casters is a ziggurat of furniture and stairs topped with a bed, where intimate deeds are to take place.

After his Felix in The Odd Couple, we know that Eric Feldstein is a convincing sweetheart, but also makes for a formidable cad. His is a choice role, flawless with more lines than anyone in the cast. Heather J. Roach relishes the way precise diction can imply sadistic intent. She may be prouder of her Maggie from Cat on a Hot Tin Roof, but she’s never been better. Impressive in different ways are the seductees of contrasting types, newcomer Sarah Liebowitz as the shy Tourvel and previously little-seen Alicia Cobb Goodson as the more tractable Cecile.