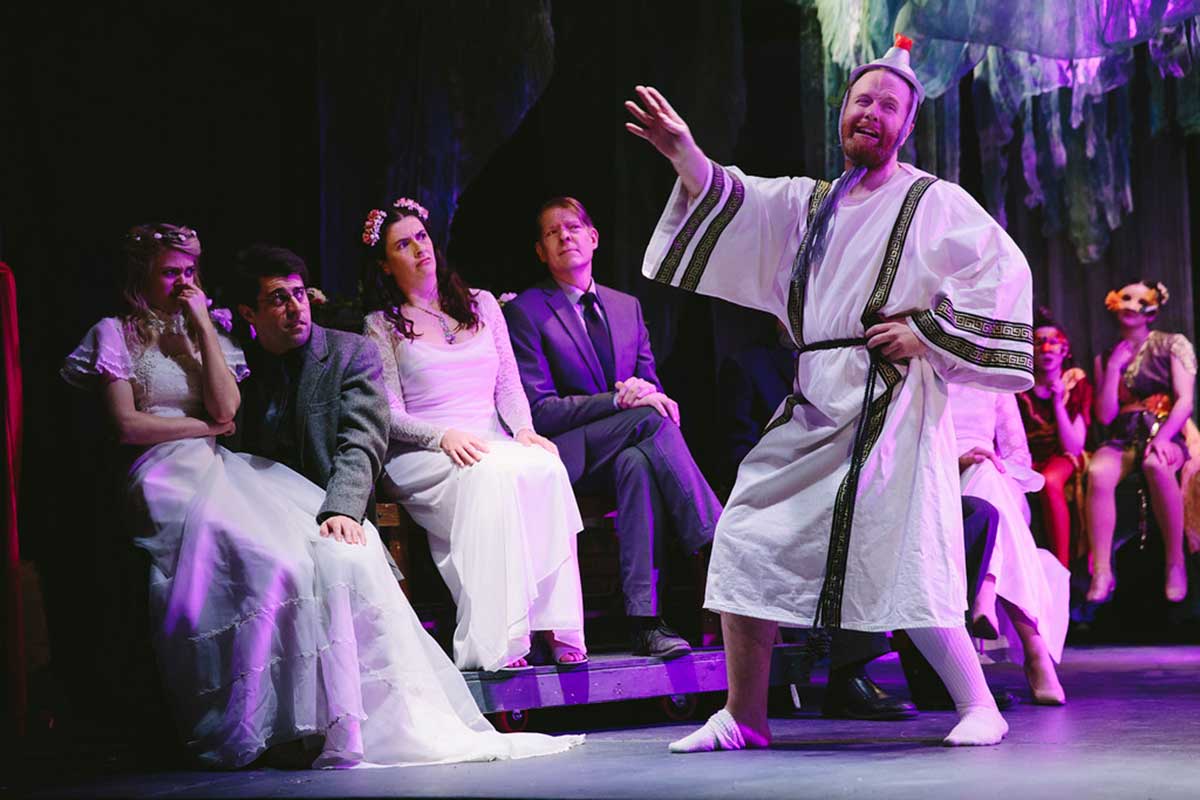 Central New York Playhouse’s inventive production of A Midsummer Night’s Dream (through Saturday, May 18) takes William Shakespeare’s fantasy comedy in new directions. The scene is Athens, New York, somewhere in the Hudson Valley, adjacent to the Catskills. It’s in the 1930s, as we tell immediately from Diane Bates and Simon Moody’s one-of-a-kind costumes. Add to that, period music like “Moonlight Serenade,” making wordplay on Shakespeare’s title.

When a group of working stiffs, led by the fussbudget Peter Quince (a fastidious Strange David Fuller), get together to put on a production of the ancient Pyramus and Thisbe, they forge ahead under the Works Progress Administration-sponsored Federal Theater Project. Such is the directorial wit of William Edward White’s staging. With a reputation for high standards and risk-taking, as well as patience, White has assembled a strong team both on the stage and behind it.

The production encourages confidence from the get-go, starting with scenic designer Navroz Dabu’s set, assisted by Karen Greenfield, with its diaphanous hangings separating the world of real and the metaphysical (here called “Enchanted”). Those six Enchanted, clad in some of Diane Bates’ best costumes, are choreographed by Lauren Puente, while fight choreographer Deus Joseph Petrelli Liszcak keeps the fists and feet flying between the misled and disputing lovers.

In a program note director White says he has been thinking about A Midsummer Night’s Dream for 50 years, since he was 8 years old. It’s probably not an empty boast. Nowhere is his lengthy cogitation evident than in the conception of the all-important changeling child, Puck (Binaifer Dabu). In a play filled with scene-stealers, no one pulls off a great heist. As Puck is the person who introduces all those magic love potions, White makes this incarnation a shyster medicine man in patched trousers, whose tattered valise reads, “Goodfellow & Puck.”

Dabu, who has done some of her best work with White, is the shortest member of the cast, and wears an ill-fitting formal coat and a derby. It may be tempting to think of her Puck as Chaplinesque, and the use of the song “Smile,” from Charlie Chaplin’s 1936 movie Modern Times, might encourage this. But not so fast. The derby was conventional for Puck in 19th-century productions, and this Puck comes in whiteface, like the Emcee in Cabaret.

What White and Dabu have done is to create an original character, elegant and conniving, with only hazy antecedents. Furthermore, with at least 20 versions of Midsummer available on video, this production looks to have spurned all of them and making it all new before us.

“Ill met by moonlight” is what Oberon (Simon Moody), king of the fairies, says when encountering his queen, Titania (Leila Dean), whose friction with one another sets much of the action in motion. Moody, who often seems more at home with Shakespearean diction than that of Arthur Miller or Agatha Christie, is cast in a role to let his talents soar. His Oberon is a more abrasive king, but he also wants to cause mischief.

Leila Dean boasts plenty of sulfurous allure. Her own hair (not a wig) has been dyed red and thickened into Medusa-like spikes. Prudently, Dean has not covered the tattoo on her right bicep. If Oberon wants to trick Titania into getting into bed with a beast-headed working man, the duo could have easily set the sheets on fire.

That bed-partner is, of course, Bottom (Ben Sills), one of Shakespeare’s great theatrical in-jokes, the self-deceived schlump who constantly overacts. Laurence Olivier once quipped that the two most demanding and rewarding roles in Shakespeare are Hamlet and Bottom. With Sills’ incarnation, Bottom is also the most successful laugh-getter, starting with his in-your-face declamation; kind of like Florence Foster Jenkins, he’s brilliant at being bad. Syracuse New Times Syracuse Area Live Theater (SALT) voters have much to remember in this production, with Sills’ jackass laugh at the top of the checklist.

None of this means that the love story has been underplayed. Theseus (Alan Stillman), the mayor of Athens, New York, hears a complaint from local bigwig Egeus (blustery John Brackett), who wants his daughter Hermia (lithe Hali Greenhouse) to marry husky, knuckle-cracking Demetrius (Chris Lupia). But Hermia prefers the leading-man looks of Lysander (Tyler Ianuzi). Egeus wants Hermia punished for flouting his command, but the cooler-headed Theseus says wait until all of this is resolved when he marries his beautiful and articulate fiancée, Hippolyta (Lisanne Petracca). This is Hermia and Lysander’s signal to run off, taking them to the realm of enchantment, presumably in the Catskills.

They tell Hermia’s friend Helena (comely Bella Calabria) what they are doing. Once engaged to Demetrius and still having the hots for him, although jilted, Hermia understandably feels a bit downcast. Having observed Demetrius treat Helena rather badly, Oberon instructs Puck to spread around some of that love potion for the eyes, but — oops! — not all the applications are on the right faces. This device may well be Shakespeare’s comment on how capricious “love at first sight” can be. In the short run, it makes for much action on stage, requiring the attention of a fight choreographer.

Meanwhile, what had looked like a comic subplot takes over center stage, with a focus on Peter Quince and the Federal Theater Project stage work. Ben Sills’ Bottom will be the Greek lover Pyramus in the show, and in a masterpiece of miscasting, the role of Thisbe will be taken by Francis Flute (Zach Gray). Not only does Gray bring the largest body in the cast, but he has a thick dark beard and wears combat boots. Still game, he achieves a high-pitched falsetto. Phil Brady also turns up as Snug the Joiner, playing a flea-bitten tiger.

If Shakespeare were always this much fun as this mounting of A Midsummer’s Night Dream, the kids would demand to see it.