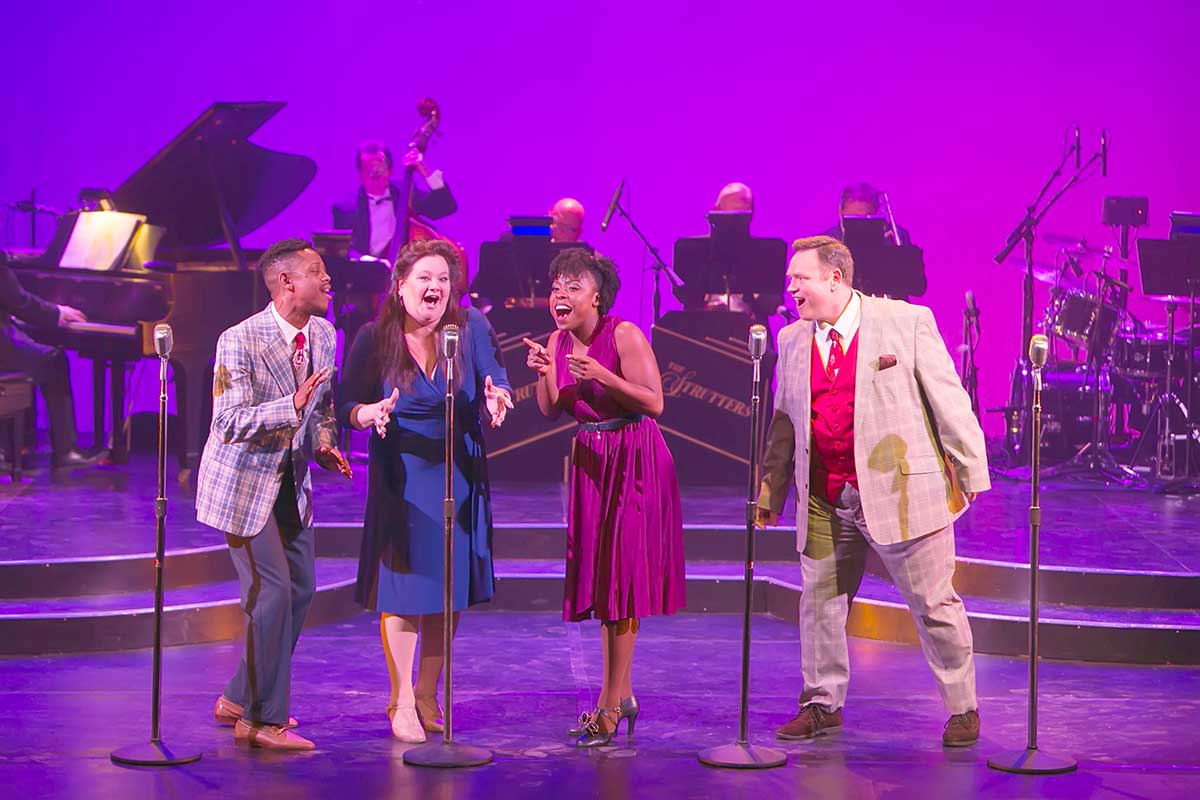 The swinging, upbeat music put together by Fran Charnas for The All Night Strut!, running through Sunday, June 9, at the Redhouse Arts Center, will cheer the hearts of audiences old enough to remember when telephone exchanges had words in them, but it so often comes with an undercurrent of deeper feeling. A representative number, although not a show-stopper, is Herman Hupfield’s “As Time Goes By,” the theme from Casablanca (1942), but written 11 years earlier. It’s so much more than a great old song.

A massive portion of the impact from Strut! comes from who’s performing. Our hometown team dazzles. The Redhouse reliably delivers professional-level productions, but the current management feels that the best talent is not necessarily what comes in from the greatest distance.

Although his name might not be so high in the credits, multifaceted virtuoso Syracuse musician Larry Luttinger appears to have been an early shaping influence. The six-player ensemble — all in tuxedos, going under the name “The Strutters” — is led by pianist Barry Blumenthal, who delivers some flashy riffs. But they have been selected from the Central New York Jazz Orchestra, and Luttinger is on the drums. They imply that the Great American Songbook is a principal national treasure.

Most visible among the local professionals is the husband-wife team of director Bob Brown and soprano Cathleen O’Brien Brown. Although one of the best-known faces in town, Brown also brings decades of directing experience with his own company, Opening Night, plus Salt City Center and others, as well as national and international credits.

Strut! may not have a story line, but it is constantly in motion, with sharp mood swings between numbers to let director Brown show his hand. The first act juxtaposes Joe Garland’s swing classic, “In the Mood,” and Socks Wilson’s comic “Gimme a Pigfoot and a Bottle of Beer,” then leads to the heartfelt and upmarket “A Nightingale Sang in Berkeley Square” by Maschwitz and Sherman.

Ensuring the numbers keep moving, Brown has brought in choreographer Stephen DeGhelder from Broadway. The four principals execute some modest dance steps, but often stage movement is more like witty mime, as when the two men raise the women’s right hands above their heads like living basses and then “strum” the strings across their middles.

O’Brien Brown is instantly recognized for her powerhouse soprano and earned applause as the tragic Maria Callas in Master Class, but her colloquial popular voice is always ready to go. She establishes her credits for this show with “In the Mood” and reaches the peak, both musically and dramatically, with “I’ll Be Seeing You” just before the first act’s curtain. In this ensemble show, she is always present.

The United States was still mostly a racially segregated nation between 1930 and 1949, but popular music was not. Distinctive black voices like Cab Calloway and Duke Ellington were major figures, and even white composers like Harry Warren often sounded black.

We rather forget who wrote what while watching the show, but lithe baritone LaRon Grant brings a capering authority in articulating scat talk. Switching gears, Grant also delivers one of the show’s most poignant numbers in “Brother, Can You Spare a Dime.”

Alto Ayana Major Bey is the one cast member without previous local ties, and not surprisingly contributes a unique presence. Without drawing undue attention, she appears to be the most experienced dancer of the quartet. She performs with a classic, expressive Broadway voice, not unlike Mary Martin’s, but visually she evokes Billie Holliday in the second act.

Tenor Richard Koons has the most extensive professional credits, extending from Jean Valjean in Les Miserables to Edna in Hairspray, but as a longtime pal of the Browns he’s been continually visible on the local scene as well. In Strut! Koons often shapes the more refined lyrics, like “A Nightingale Sang in Berkeley Square.” It’s not typecasting, however, but also a means to contrast with the saltier humor of the tango, “I Get Ideas.”

The original All Night Strut! premiered in 1979 and has gone through some permutations over the years. A 1988 local production cited only 19 musical numbers, including two by George Gershwin, whereas the Redhouse production delivers 26, meaning more songs for the buck. Significantly, the big four from the era — Gershwin, Cole Porter, Richard Rodgers and Irving Berlin — are all absent from this program.

It speaks well for the strength of the American Songbook that such a strong show can be constructed from other worthies like Jerome Kern, Frank Loesser and Johnny Mercer, as well as from composers only serious buffs can remember, like Erskine Hawkins and Skeets Tolbert. The names were not immortal, but their music was.

The new regime at the Redhouse guarantees professional production values, as well as performers, with Marie Yokoyama’s lighting design, Tony Vadala’s sound design, Terry Martin’s set and Donnie Williams’ costumes. You could not beat this show in any major metropolitan market.