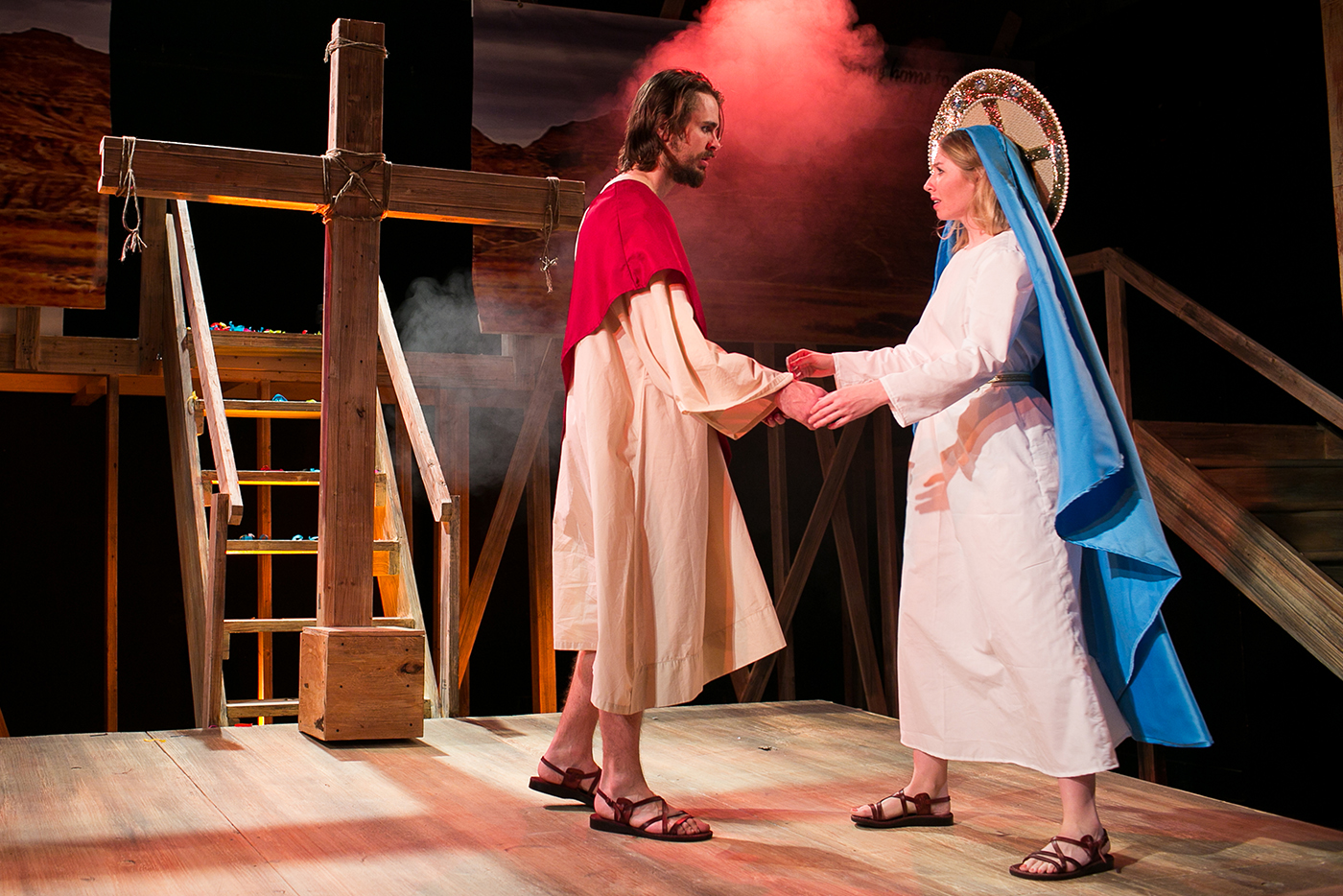 Many contemporary audiences think of it as the plot of Jesus Christ Superstar. “Passion play” is the generic name for the dramatization of Christ’s trial and crucifixion, weaving together elements from the four Gospels. Productions began in the Middle Ages as the original community theater project, and more than a hundred versions will appear this very spring.

Despite Ruhl’s credentials (including a MacArthur Foundation “Genius Award” and a Pulitzer Prize) and ecstatic praise from influential critics (John Lahr of the New Yorker), her Passion Play is not performed very often. That’s partly be- cause it’s so ambitious. It is as sweeping as Tony Kushner’s Angels in America in depictions of art and politics intertwined with religion. And it runs three hours and 40 minutes for the production running through Saturday, April 9, at the Redhouse Arts Center.

Most of its meaning is on the surface; it is never obscure. The greatest demand on the audience is that Ruhl expects us to remember what actors have said over centuries of action and hours of perfor– mance.

Act I is set in a small town in the north of England, where Jennifer Burke’s dia- lect coaching makes everyone sound a bit like Ringo Starr. It’s 1575 and Protestant Queen Elizabeth (Amanda Bruton) is starting to repress the townies’ production of the Passion play as “too Catholic” and sacrilegious. Switch to Oberammergau, Bavaria, for the most famous of all Pas- sion plays. By 1934 the free-floating local anti-Semitism in the portrayal of biblical Jews became strident under the encour– agement of Adolf Hitler (Amanda Bruton again in an understated portrayal). The third act leaps forward to tiny Spearfish, S.D., in the near present of 1969-1984. Bitter moral choices over the Vietnam

War linger in the hinterlands, but Ronald Reagan (Amanda Bruton!) coos uncon- vincingly, “It’s morning in America.”Passion Play may be large, but it does not sprawl. You need to remember only 10 actors, plus Ms. Bruton. Six of them are always cast as the same characters in the different versions of the biblical story: James Jelkin as a bearded, dreamy-eyed Jesus; Will Graziano a scowling Pontius Pilate; blond Caitlyn Oenbrink a slender and luminous Virgin Mary; tall Kate Fahey’s Mary Magdalene as a blousy redhead; Ben Sheedy as a barking but not always astute director of the plays-within- the-plays; and adolescent Sadie Fridley as the impudent village idiot.

In each instance, we pay more attention to what could be called the backstage drama. In 1575 the squabbling over roles recalls Peter Quince and Bottom in the Mechanicals’ scenes from A Midsummer Night’s Dream. All performers want to get into the show, regardless of their suitabil- ity for playing specific roles. The sharpest conflict erupts between two brothers, one favored by nature to play Jesus and his resentful brother, malformed from birth, destined to play the hated Pilate.

In all three acts the tension between Je- sus and Pilate is central, but its resolution varies greatly in each reiteration. In 1934 Germany, the Jesus model of self-sacrifice sends the actor off on a moral quest in life. But in the Vietnam-era Passion play, it is the actor playing the responsibility-shirking Pilate who makes the stronger moral stand, lamenting sins committed in a far-off jungle.

Once again artistic director Stephen Svoboda pulls off the impossible: an epic on one of the smallest stages in town. We can start with the excellent performanc– es of his leads, especially Graziano and Jelkin, and many important supporting roles, such as those of Colin Wilson, Joe Fanelli, John Bixler and Sadie Fridley. Katharine Tarkulich’s many costumes, notably for the three incarnations of Amanda Bruton, are all first class. And props master Morgan Embry’s floating fish spoof Ruhl’s own high-flown intellectualism.

A Comedy On Cruise Control
Rubes, Raffles and Redemption
To Top