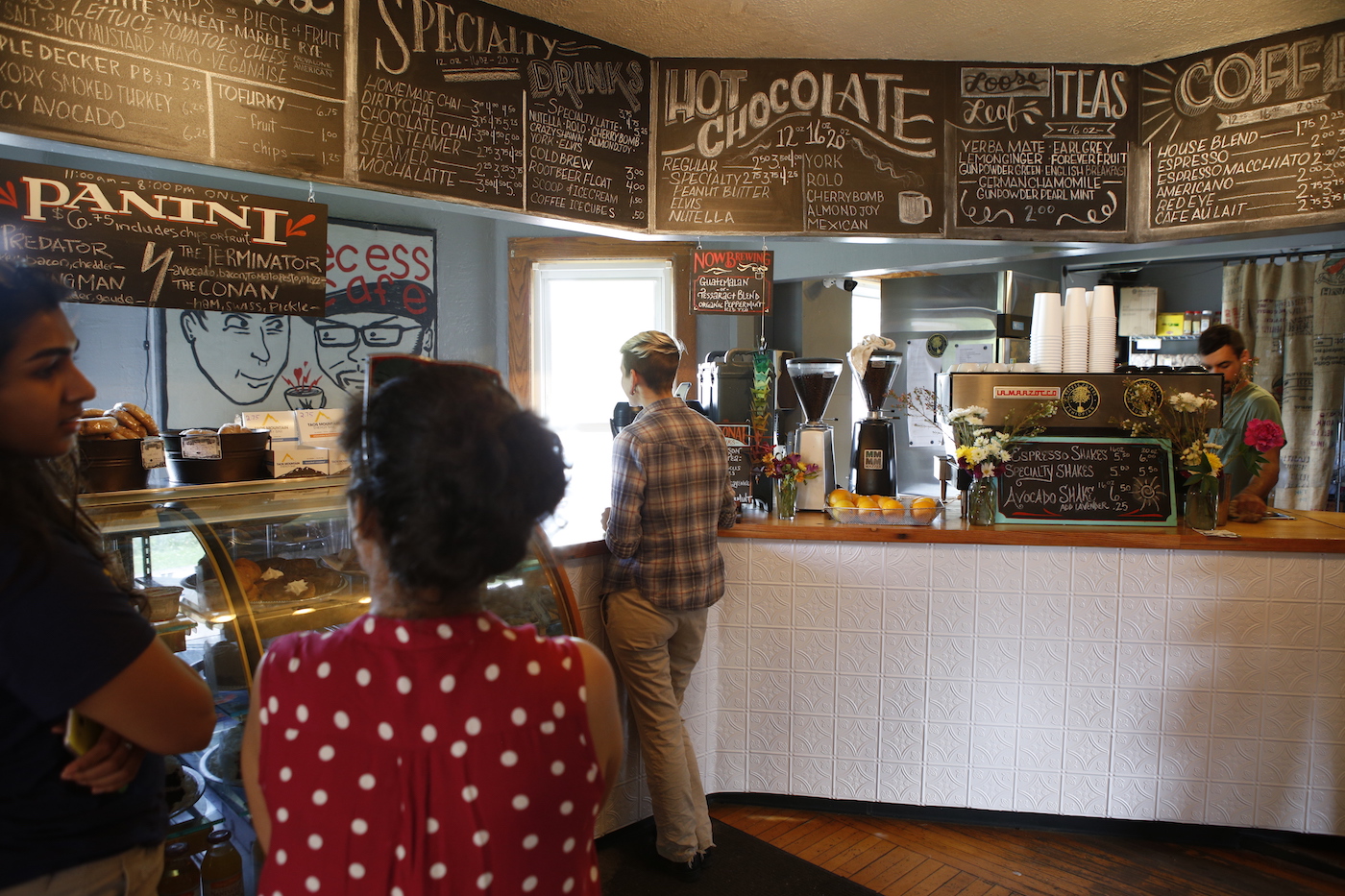 After a haphazard beginning, Recess Coffee celebrates a decade of success.

Jesse Daino and Adam Williams had no aspirations to own a coffee shop and roastery. Williams was working at the Syracuse Real Food Co-Op, off Westcott Street, and sometimes stopped in a neighborhood cafe called Recess on Harvard Place for coffee and conversation. When he learned of the owner’s plans to sell it, he recalls, “I half jokingly said I would buy it.” He asked his friend Jesse if he wanted to go in on it.

“It sort of fell in our laps,” Williams says.

“We were young and dumb,” Daino adds. And that’s how Recess Coffee and Roastery got its start. They bought “ramshackle equipment” online and trained “haphazardly” to learn how to roast, brew coffee and pull espresso shots.

Early on, they recall, they treated the coffeehouse as a sort of “clubhouse” for their friends. By their first anniversary, they say, they had started to realize the potential for success if they took things more seriously and put more effort into the business. So the pair gave it their all for four years, making enough money to pay rent and bills and living off the barista tip jar.

Flash-forward 10 years and the Westcott Nation — and beyond — runs on Recess. It’s a staple of the coffee and roasting scene in Central New York, no longer the new kid in town. Major milestones in the Recess journey, include landing their first wholesale accounts (the Real Food Co-op and Alto Cinco), hiring staff (now more than 40) and keeping regular hours that customers could count on. On top of homemade baked goods, some of them vegan, they’ve added cafe fare such as sandwiches and salads.

Daino and Williams say slow, steady, percolating growth has been key to the Recess success. The flagship coffeehouse and laid-back community gathering place in the Westcott Nation underwent significant renovation in 2014. Last year, the partners added a second location with its own distinct vibe in the Courier Building downtown, across the street from City Hall.

Wholesale accounts have grown to include more than 70 retail, restaurant and business customers. Williams, Daino and their team now roast 5,200 to 6,000 pounds of fairly traded and sustainable beans each month at Recess HQ, their 3,000-square-foot roasting, baking and production facility (and office space) on Boss Road, in DeWitt.

The partners’ goals for 2017 include further renovation of the Harvard Place location, with an eye toward making the kitchen space more efficient and adding more variation to the café menu. They would also like to further grow the wholesale side of the business. Recess coffee can be found in the Adirondacks, the Albany area and Poughkeepsie but not yet in New York City. “That’s going to be the next step,” Daino says. They look forward to hosting more “cupping classes,” where participants learn about the flavor profiles and intricacies of individual coffees, enjoy food and baked goods and head home with some beans.

Williams and Daino say their individual roles have evolved somewhat over the years to fit their interests and strengths. Daino, the master roaster, took his first business class recently and focuses on the wholesale and financial end of the business.

Williams, who did much of the baking in the early years, describes himself as “at the ground level,” managing operations, logistics and details. He worked with Mack Brothers to help design the cold brew tank at the Boss Road facility and is making plans for the coming renovations and kitchen build-out on Harvard Place — a challenge to execute when your business is open until midnight every day.

The partners support each other, trust each other, and enjoy the same solid friendship they did when they attended high school together in Central Square. They’re grateful for their staff and customers and their place in the local coffee scene.

“Few people leave the house without having coffee,’’ Williams says. “We’ve been lucky to find our spot in the world.’’

Recess marks its 10th anniversary with a holiday-themed party on Friday, Dec. 23, at the Westcott Community Center. There will be food, music from Mandate of Heaven, Difficult and other bands, art, 10-year anniversary posters and T-shirts and a photo booth. Tickets cost $15 and are available at both Recess locations.

Free Will Astrology
Holiday Weekend Fun in CNY
To Top