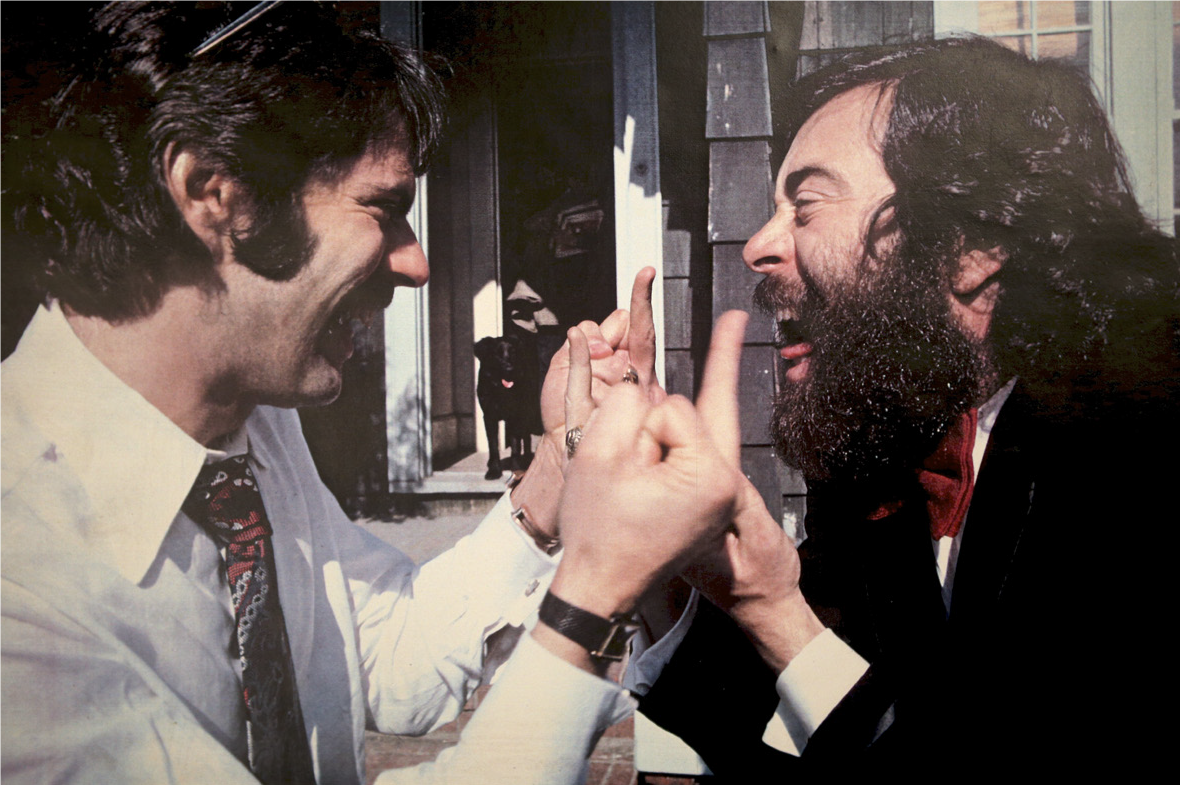 Ken Simon’s reflections on Fat Igor, the paper’s memorable mascot: “He thought he
was very hip and cool but he wasn’t really, and that’s kind of what I liked. He’s kind
of brash, he’s kind of aggressive and you like that in a person. He’s harmless, he’s
a womanizer. We just started using it and people responded to it. I even posed for
a photo dressed like Fat Igor. I don’t know how long Fat Igor lasted. He was a cool
mascot. “Can you dig it?”When Syracuse New Times creator Ken Simon visited our 1415 W. Genesee St. office on March 19, 2009, to talk to staffers about the origins of what was then the nation’s third-oldest alternative newspaper (we’re now No. 1), it seemed like a good idea at the time to record his comments for a future issue. We published his flashbacks in the July 29, 2009, edition as part of our 40th anniversary celebration.

“I don’t know what led me to do it,” he admitted about turning his Orange Pennysaver into something more than a vehicle for advertising. “I guess the urge to communicate did, but it was crazy because I had no money. I knew there was a void on campus for a newspaper that had advertising. The Daily Orange had gotten so strident and radical and there was no advertising. So I looked at it and thought, ‘Maybe there’s a market for advertising. Maybe I could start something.’ I borrowed $50 and I printed up business cards, letterhead and invoices and thought, ‘That’s it: I’m in business.’ I didn’t have any plan; I just sort of did it. I don’t know what I was thinking.”

Simon, then a 21-year-old broadcast journalism senior at Syracuse University, certainly helped define, shape and co-invent the ingredients that would go into every issue — which often included everything but the kitchen sink. The first eight-page issue of The Orange Pennysaver was “a hodgepodge of display ads, a few classifieds and one syndicated editorial cartoon,” Simon recalled. “It generated a profit of $700.”

Simon quickly went into expansion mode to increase the page count for subsequent issues. “The first place I went to for advertising support was Liquor Square, and he said, ‘I’ll take a double-truck’ (two-page center spread) and I said, ‘For how long? For a year?’ And he said sure. That was the key moment right there, so then I went to Discount Records and sold them an ad.

“The 11 years that I ran The New Times were incredible. We were a lot less established then. We were young and wild and inventing it as we went along. It was crazy times, 1969 to 1980, very rich and profoundly important times to our country. We were all in our 20s and 30s. We were people who love journalism and who love newspapering. I’ve always thought that the dream is you go out and you work your butt off at a daily newspaper, and then you retire, you buy a little weekly, you retire to that. I was lucky enough to do that ass-backward. It was the greatest 11 years that I’ve spent in many ways, lucky to do the things that I love doing. I helped to invent the concept of the alternative newspaper, me and the people who worked with me.”

Here are more excerpts from that 2009 session:

This was a tough city to start an alternative newspaper in many ways and for those reasons, The New Times is even more important to the city, to give it an alternative voice, a place for civic discourse, and that is at risk these days as newspapers implode all over the place.

The first issue, I needed to get some cash going so we ran around and put it on everyone’s door at SU; it was advertising, it was a pennysaver for a while. Then I started putting in editorial when we could, even though Vic Ianno (in charge of printing The New Times at the Scotsman Press) asked me, “What are you doing putting stories in that? Are you crazy?” A pennysaver is all income but then we started adding editorial as we could afford to and I started recruiting writers. So I changed it to Campus Pennysaver, because I expanded it to Onondaga Community College and Le Moyne College.

I recruited people. Walt Shepperd was publishing The Nickel Review at the time. I met Walt coming out of the Scotsman Press; I was going in with the paper that week. He was experiencing some difficulties, so I started a conversation: “If you don’t make it, you’ve got a place here.”

Mike Greenstein, I went to his dorm room; he was writing for The Daily Orange at the time and I thought he’d make a great addition to the paper, and I was right.

After a while we got the core together and then people started coming in, we built up an editorial staff. It grew very rapidly because the news hole grew rapidly and we were scrambling to fill it. The work flow was not as efficient as it is these days. I pasted the first issue up on a piece of plywood on my bed; it was eight pages. When we started growing, a piece of plywood was not very practical, so we moved out down to 311 Comstock Ave., across from the SU chancellor’s residence. I lived on the second floor and the paper was produced on the first floor.

I cut this deal to give away movie passes to Shoppingtown Mall, and there was a lot of response. It’s the first time I knew we really had some impact. The paper came out with a half-page vertical ad with two free movie passes; all you had to do was show up at the office. We looked out the window and there was a long line, it was very impressive. Wow, people are reading this and they’re responding.

Because we had been going great guns, we also started a paper in Ithaca in 1972, and started a paper in Buffalo. Unfortunately, these were in the days when we didn’t have computers to keep track of our expenditures; everything was on these ledger sheets. All of a sudden it seemed we were producing three papers on this antiquated equipment. In a good week we produced 120 pages among the three. And we had three sales staffs, so I had weekly meetings in three different cities. We grew so rapidly, and what happened was we were losing money but I didn’t know that.

When I figured it out, where before I had never had an increase in my printing bill, the price of newsprint shot way up. We had a 30 percent increase in newsprint just at the time when I needed three times as much of it. And the prime interest rate had gone to almost 21 percent. And our advertisers were having trouble paying their bills. This is the first time we needed money. Now I look back on it and there’s something to be said for a fist in the stomach. I shut down Buffalo, gave the Ithaca paper to Jim Bilinski (still the Ithaca Times’ publisher), and concentrated on Syracuse.

This was the first time that I was scrambling around to find local partners that could put money into it. I had to separate the business from the editorial. We were at the White Memorial Building (East Washington and South Salina streets). I didn’t tell the staff that I had no money, that I couldn’t meet payroll. So that became my job, to scramble around to meet payroll, and part of that was finding some partners real quick. I decided I had to shut down. We were four or five days away from the deadline for that maybe last issue. It was also the middle of winter and we lost heat. Roland Sweet, creator of the News and Blues column and the award-winning “We for Lee” political endorsement, feverishly at work on his typewriter. (Bob Lorenz photo)

Then I asked Tom Peyer if he would create a cartoon for our last issue. It was four panels featuring the publisher of The Herald Journal at the time, and he’s looking at a copy of The New Times that says “New Times out of business,” and the publisher looks up from his desk and says, “You mean we won’t have The New Times to kick us around anymore?”

The day before payroll I got the green light from a group of four businessmen in town who invested in the paper. We put out another edition and the heat went back on. We were good for another year before the investors decided, that’s it, you’re not making any money, you’ve got two weeks before we shut you down. So I had to go through the whole thing again. A couple years earlier I had saved the Advocate newspapers (out of Simon’s home state of Connecticut). They were experiencing financial difficulties. There was a store on Marshall Street, Discount Records, and the guy that owned it ended up working for CBS Records. So we printed and distributed newspaper inserts for CBS Records to alternative newspapers. They were printed at the Scotsman and shipped out by truck all over the country. There was lot of money involved and that saved our ass for a long time.

I knew the people from the Advocate, and they asked me for cash since they were going out of business. I told them, I can give you this newspaper insert and had faith that they would distribute it. I called a couple of people there: “Would you be interested in owning a piece of a paper in Syracuse?” So I ended up selling another chunk of The New Times. For a year I was going to Amherst, Massachusetts, once a week because we stopped producing the paper here, which I didn’t like. I insisted on working the boards so we could have some control. So for a year, I pasted it all up there, using their crew. That was kind of tiring. After a year my contract was up, so they ran it for a couple years and they screwed it up big time, business-wise (which eventually led to the Syracuse New Times being purchased by publisher Art Zimmer in 1984).

I can appreciate the fact that you are still here. There have been three or four times that I didn’t think it would survive, and it has, which I think speaks to the passion that people working here have for it. You are going over and above what would be a normal threshold for people, and it speaks to the community’s need for something like this. Sometimes if there is a real need for something, the stars do align. Ken Simon’s reflections on Fat Igor, the paper’s memorable mascot: “He thought he was very hip and cool but he wasn’t really, and that’s kind of what I liked. He’s kind of brash, he’s kind of aggressive and you like that in a person. He’s harmless, he’s a womanizer. We just started using it and people responded to it. I even posed for a photo dressed like Fat Igor. I don’t know how long Fat Igor lasted. He was a cool mascot. “Can you dig it?”

It’s unbelievable that stupid management decisions and corporate ownership and inability to foresee the internet and take advantage of the new digital platforms led to a situation where it’s sounding the death knell for daily newspapers. But the business model will eventually catch up, because people crave the kinds of things that alternative newspapers can do in a big way. Economic diminishment and layoffs lead people who really are passionate about journalism or community or arts or culture to another outlet, because downturns don’t stop that passion from happening. We still need to know what’s going on. I think The New Times and papers like it that are well run and well managed are going to survive because the playing field has been leveled.