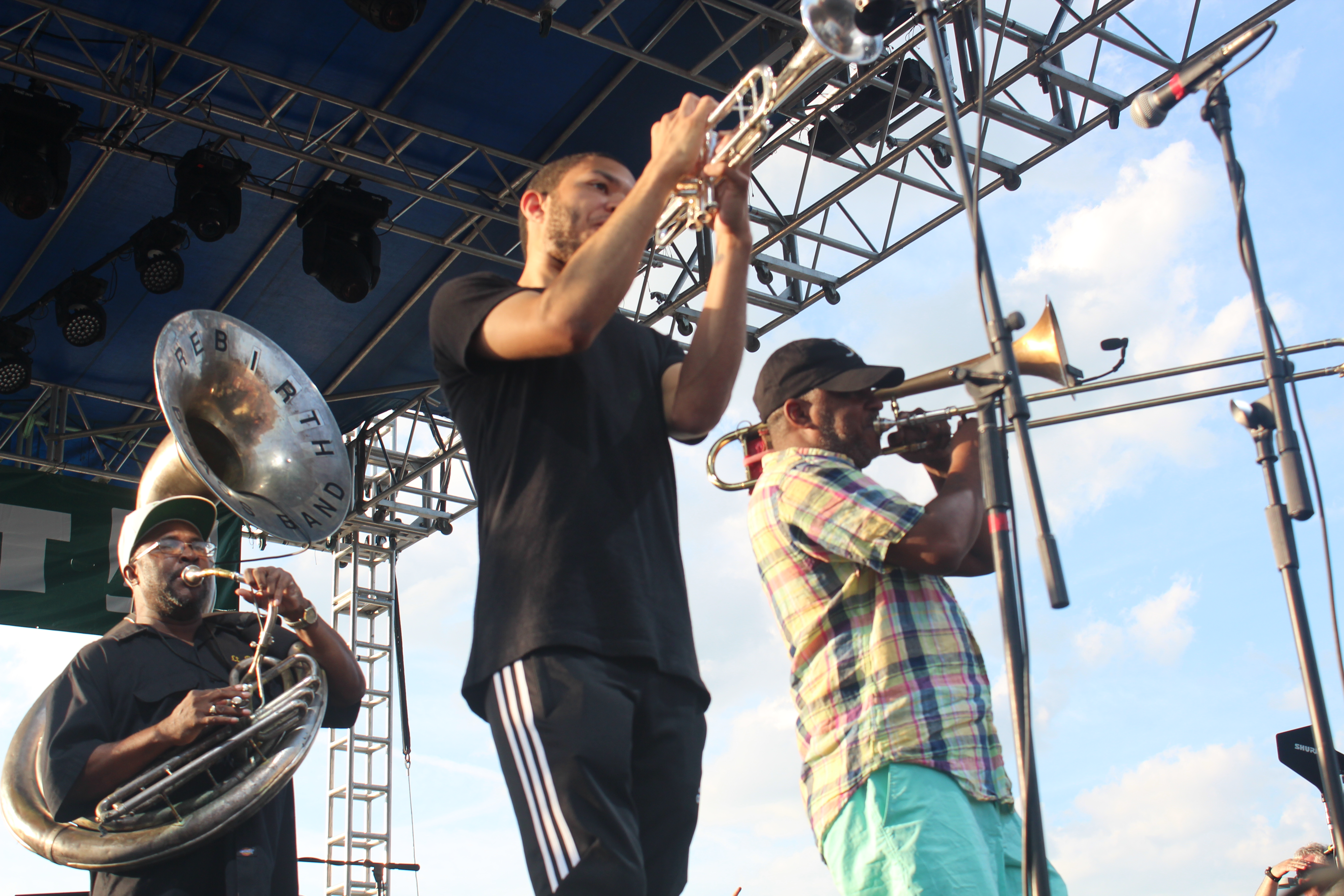 Since 1983, Rebirth Brass Band has blazed a trail for New Orleans music. Founded by brothers Philip and Keith Frazier, the group released their first album, Here to Stay!, in 1984; their most recent album, Move Your Body, was issued in 2014.

In 2012, the band’s Rebirth of New Orleans CD won Best Regional Roots Music Album at the Grammy Awards. Rebirth made appearances on the HBO series Treme.

Bass drummer Keith Frazier took a few minutes at his home to talk by phone about the New Orleans tradition.

You’ve been writing and performing since 1983 with this band. What motivates you to keep going?

The people around us. Whether it’s when we’re traveling around or the city of New Orleans, people give us the motivation to keep doing what we do. You always want to play. You don’t get tired.

How do people react to your music around the world?

It’s different reactions. Sometimes people are up and ready to go, other times we need to bring them into it. It’s always different and depends on how people feel. Then it’s the energy we get from the audience: what we give and what they give us.

Were you ever surprised by a crowd’s reaction?

In 1996, we ended up in Damascus, Syria. We were supposed to go to Algeria, but there was a civil war, so they said, “We’ll send you to Syria.” That’s the Middle East, a Muslim country. We thought, “They won’t dance. They don’t dance to secular music. They’ll just look at us.” But the people danced and it was inspirational. We figured if we can get these people to get up and dance, we can make anyone dance.

Do you feel a greater responsibility because you carry the tradition of New Orleans in your music?

Yes. We’re responsible for the brass band tradition. We know there have been bands before us and it’s time to carry on the tradition and legacy to younger guys. It’s always exciting to continue the inspiration. Young guys come in and we want to inspire them to do this type of music. There are so many new, different genres: rap, reggae, hip-hop, electronic. When guys want to do this old style of music, just pick up a horn or a drum, that’s inspiring.

My brother Philip. He was playing in a few horn bands and asked me, “Do you want to play with us?” I picked up a bass drum and he got me in. Today, the excitement of the audience, the joy we bring to people of all walks of life, that keeps me going. Music brings people together.

Your bandmate Derrick Tabb developed The Roots of Music, a nonprofit after-school music program for kids. Tell me about that.

We try to get kids involved in music. It’s how we all started, with marching band. It’s for kids ages 9 to 14 and based in New Orleans, but we do lots of outreach programs and talk to kids at schools. Kids are getting away from really playing music, so we try to keep them involved. Physically playing music is exercise for both the mind and the body. Standing up, marching, whatever you’re doing, it’s physical. And in order to play music, you use math. It helps in that regard, too.

Have you seen many success stories?

Lots of success stories. It’s for at-risk kids in New Orleans. They join music and get inspired. They realize, “If I can do this, I can do better in other classes, too.” Their average goes from C to A. Some have even started their own musical careers.

What advice do you have for people who want to do what you do?

If you want to do it, just do it. Just like our song, “Do Whatcha Wanna.” Do something positive in your life and for the people around you.

Why should people come to your show?

Our shows are all very improvisational. There’s no telling what we’ll do or how people will react. There’s no set list. We get there and whatever happens happens.