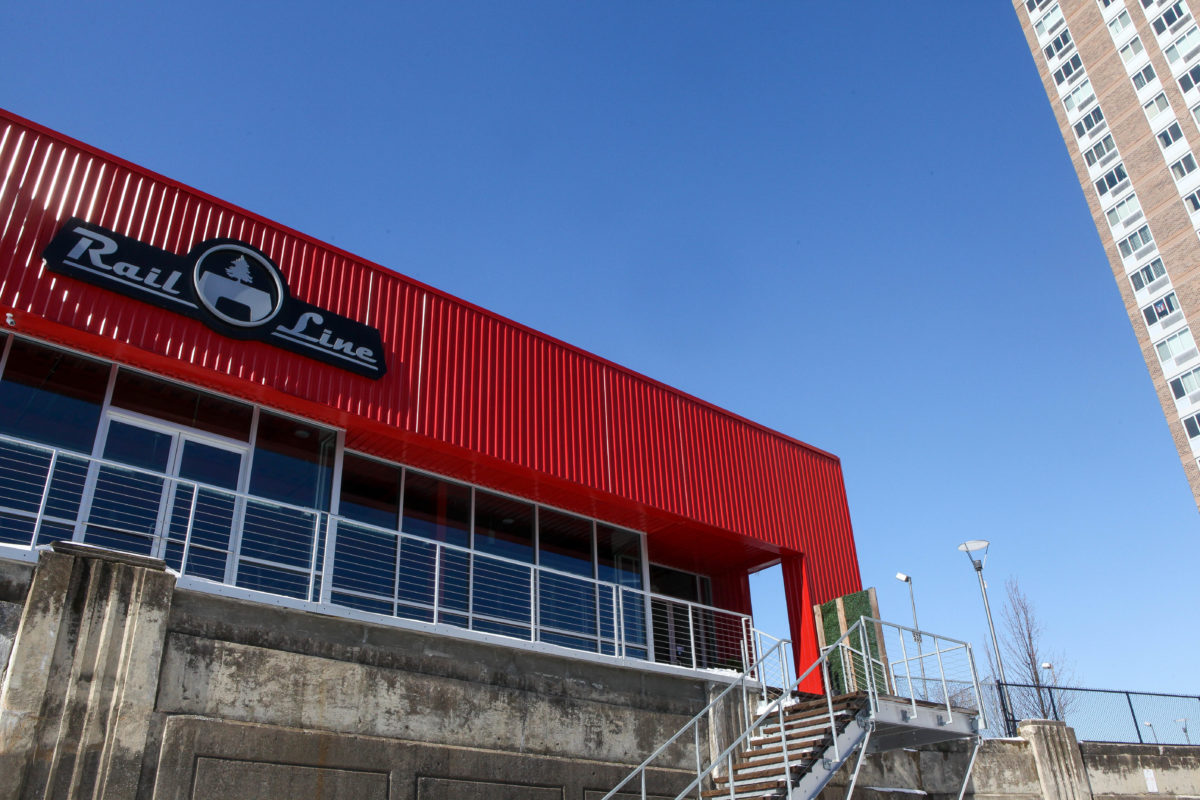 Syracuse residents now have a new space to host private events and gatherings in downtown Syracuse: Rail Line, 530 S. Clinton St., on the south end of Armory Square. And so far business has reportedly been going very well, according to owner Robert Podfigurny.

Rail Line is in a building that sits along the elevated railroad tracks. Those who commonly visit the area may have noticed its red, boxy exterior. The modern, industrial- style building works as an indoor-outdoor events venue, with a full-service bar, both a ground-level and a private courtyard and rooftop access.

The roof is also home to an urban garden and offers a sprawling view of downtown — whenever the weather cooperates. In the summer, the garden produces lettuce, peppers, corn, zucchini, tomatoes and more, which is all harvested and used at The Evergreen in Hanover Square, where Podfigurny is a co-owner. Rail Line is also developing a partnership with a food studies class from Syracuse University to figure out more of the best practices for urban gardening and green roofs. Private-event space was a missing piece in the downtown scene and would work as a nice complement to the restaurant business, Podfigurny said. While private parties could be held at The Evergreen in the past, the venue couldn’t shut down to the general public during them and still remain efficient.

“When the opportunity came, I was for either a second restaurant or a place to hold private parties. And this was perfect because it could eventually be a full-blown restaurant if downtown — and I’m sure it will — continues to grow to support another restaurant,” he said.

Podfigurny knew he wanted to keep the venture, whatever it shaped into, in downtown Syracuse. He lived downtown for more than a decade and spent several years on the Armory Square board in the early 2000s. The camaraderie among downtown businesses is something he values and says it can only help the overall success of the area.

“When I was on the Armory Square board, it was all the bars working together to throw these special parties and events,” Podfigurny noted. “It was the retailers getting together to put together a one-page buy for a Christmas-sale special for a week, or an outdoor sidewalk sale in the summer.

“I think all of us together are stronger. You could have that mentality of, ‘I’m in competition with that guy because he also sells hamburgers,’ but it just doesn’t work that way. I think people want to come downtown because they have so many options. They may choose to go somewhere else for lunch or dinner that day, but in the end we’re all getting better business, and I think that’s proven itself as we’ve seen tremendous growth and more and more people relocating downtown.”

For those hesitant about the idea of having a large event in downtown Syracuse, where the thought of congested street parking can make the stomach knot, Rail Line has that covered. The building has its own parking lot up a ramp on the north side of Clinton Plaza. There are about 30 parking spaces available during the day, which opens up to more than 80 when employees and tenants leave the nearby office spaces after business hours.

Rail Line has already hosted a slew of events from college sorority parties to teen birthday parties, Podfigurny said. There have also been business meetings, corporate after-hours events, music trivia, plus a few wedding showers and anniversary parties. They also partnered last fall with Eden, a wood-fired cuisine restaurant on Hanover Square, to bring in a wood-fired oven outside for an event. The availability of the outdoor courtyards and parking lot make the space extremely versatile to various get-togethers. The Rail Line has tables, a full bar and catering capabilities with The Evergreen. (Michael Davis/Syracuse New Times)

Rates for the space begins at $950, although Podfigurny said there are several discounts for nonprofit groups and events held on weekdays. Rail Line, with its production arm Macroburst Productions, plans to have ticketed outdoor music food truck events.

Rail Line will also be the site of a May 25 pop-up event for the Allyn Foundation in honor of the soon-to-come Salt City Market, a food hall and market set to open in fall 2020 at the intersection of South Salina Street and Onondaga Boulevard.

They’ll also be working with Wildflowers Armory to present a new summertime craft fair called Crafted. Rail Line will take care of the food trucks, while organizing the artisans will be left to Wildflowers staffers. The event is scheduled for June 8.

“Anybody that’s in the community can benefit from this space we’ve developed,” Podfigurny said. “And we’re going to build up from here.”