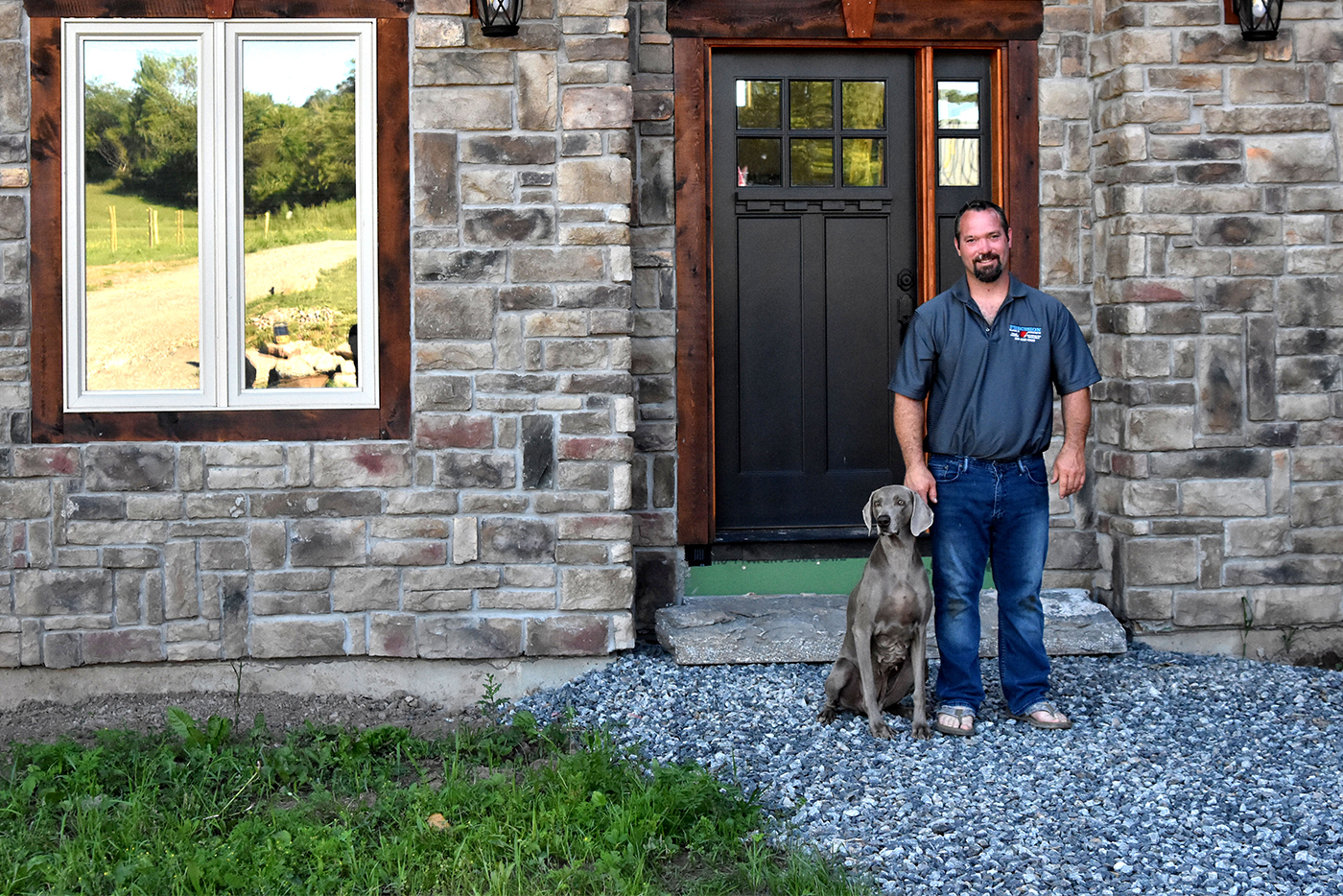 Derald Jayson’s love for masonry at a young age led to a successful business venture.

Burleson Road in Oneida is a long stretch of sprawling green hills and bushy trees. The silence is peaceful and the air is clean. Horses graze in front of a two-story house with intricate detail and design. This house was created and built from the ground up by Derald Jayson, owner and founder of Precision Block and Concrete. A home is a representation of the people who live there, and in Jayson’s case, he used his carpentry and construction skills to go above and beyond any normal build of a house — he put his heart and soul into making a home for him and his wife.

“When we decided to build this house we knew we wanted to use as many old materials to refurbish as possible,” Jayson said. “I like to be on the green side of building, not only with my house but with my business as well. About 20 percent of every build gets tossed in the garbage, so I used the resources I have around New York to build my home.”

Jayson used old rebar for the spindles and railings inside of his house. The American Larch lumber for the deck is from Massena, which was also handed down and refurbished. The beams in the kitchen came from the Bank of Utica and were built in 1850. Some of the other beams in the house were from Watertown and were built in the 1840s, and his bathroom floors were recycled from old tile from Victoria’s Secret. The inside of Derald Jayson’s home, which he built himself, on Burleson Road in Oneida. Cassidy Backus photo

“I don’t build houses for a living,” he said. “I’m a carpenter by trade, but I chose to do masonry for a living. I do everything for some life-long customers from carpentry to electrical to plumbing, but my main calling is stone work.”

Much of the stone in Jayson’s home was saved from other jobs he had done around the area. For Precision Block and Concrete, he does works with veneer stone and stamp concrete as well as foundation work for both commercial and residential jobs. His company is willing to work with clients to match their specific needs.

“Growing up, I liked to be challenged physically,” Jayson said. “My dad was friends with a lot of masons, so it was easy for me to pick up a summer job in construction, and I just ended up loving concrete.” Jayson looks up to his second story loft with a smile, “The look on someone’s face after a job well done is overwhelming, but really satisfying.”

In 2009 Jayson started Precision Block and Concrete where he tries to perfect every job given to him. He explained how nothing is ever done at a job until he gives the stamp on it, and if a customer isn’t 100 percent happy, he will rectify the situation. He takes pride being there and making sure the job is done right.

Jayson has four other men working for him at Precision Block and Concrete. In the last couple of years, the company grew too big for Jayson to personally oversee, so he was forced to downsize. He and his employees travel as far as Albany one way, and Auburn the other way.

Jayson and his team previously worked on the Delta Apartments in Rome from doing its sidewalks to the base of the building. They also restored a lot of the history of the American Legion in Canastota where they brought life back into the stairs, the fireplace and the stonework.

With commercial work, the time it takes them to finish a job is around three months to a year, depending on the structural damage, but a residential job can take them one to three weeks. “I love the flexibility of having my own company because I can be there for my wife,” Jayson said. “But people don’t realize how devoted to your job you have to be; you don’t really get a day off, and it’s a tough job in a competitive market. You really have to do everything yourself and make sure you’re financially stable.”

Jayson has a lot of personal relationships and is a go-to person for a lot of his clients. He and his team stand out because they care about their clients and their clients’ families.

“The biggest investment someone can make is an investment in his or her home,” said Julie Heintz, Jayson’s wife. “They want to know they can trust who they are hiring and [Derald] truly cares.” Jayson is versatile, so clients will hire him for various jobs, which include stamp concrete, landscaping, hard scapes, veneer stone or site work. Precision Block and Concrete runs its own machines and provides all of its own products, so no outsourcing is reequired.

According to Jayson, determination and motivation make a good construction worker and company leader. A few years ago Jayson became ACI (American Concrete Institute) certified because he felt he needed to enhance his knowledge of concrete. He’s been tested in the field for years, from structural concrete to decorative concrete to veneer concrete, but he felt it was time to get an education behind it since he never recieved a degree before.

Jayson has plans to open up a store front in Canastota. He has also been working hard to adapt to social media through his company’s website, precisonblockandconcrete.com and Facebook to get word out for his business. “Just because we are at four employees now doesn’t mean I don’t want to expand in the future,” Jayson said. “I love the responsibility of having people depend on me; both clients and employees. It’s a great feeling, and I love doing what I do.”