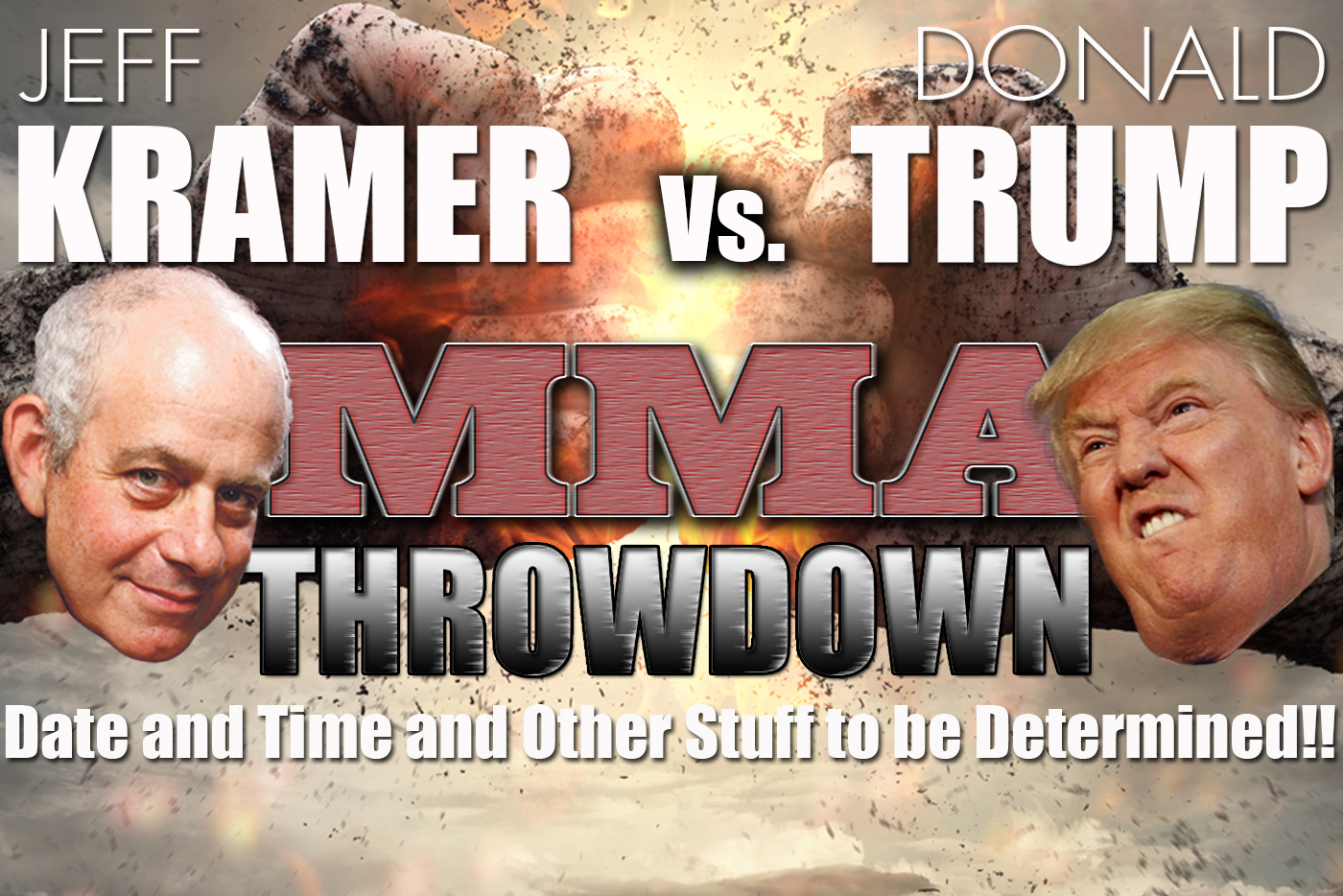 It’s time for The Donald to put up or shut up.

The idea was planted in my head by The Donald himself when he critiqued the Democratic National Convention with his usual blend of restraint and insight.

“I wanted to hit a couple of those speakers so hard,” the dictator-in-waiting blustered. “I would have hit them. I was gonna hit one guy in particular, a very little guy. I was gonna hit this guy so hard his head would spin and he wouldn’t know what the hell happened.”

You know what, Donald? I get it. I really do. As it turns out, I’ve been fantasizing about doing the exact same thing to you. Something about the combination of smug, ignorant and mean has always set me off. And that got me thinking: Is there an opportunity for us now that mixed martial arts is finally legal in New York state?

Imagine us beating the crap out of each other in a major pay-per-view Ultimate Fighting Challenge. Regardless of the outcome — the whole thing’s rigged, if you ask me — we’d both be winners. I’d be fast-tracked out of Syracuse New Times obscurity straight to international media stardom. Heck, I’d be bigger than Megyn Kelly.

And you? By accepting a challenge from a bigger, younger opponent, you could prove to voters that you really are “a fighter” — not just a loudmouth fancy boy eating KFC with a knife and fork. (Seriously, Donald? What is the deal?)

But this is bigger than any presidential race. It’s about branding. As a businessman and casino operator, you’ll be guilty of financial malpractice if you decline my remarkable offer. The amount of money wagered on our bloodbath will make the Super Bowl look like a penny ante poker game in Paul Ryan’s basement. Expect Vegas to project our bout too close to call.

We’re both about 6-foot-2, we both played football and we both wear a size 12 shoe. We’re both nuts, although I give you the edge there.

The oddsmakers will take into account that I outweigh you by 75 pounds and I’m 16 years younger, and they’ll like that I am left-handed. Also, you’ve got those pesky heel spurs that kept you out of Vietnam. Ouchie!

But look at the liabilities I’ll bring to the showdown: My right shoulder is so arthritic I can’t throw a decent punch with that hand. My left knee has been replaced. I’m prone to asthma and disorders of the blood and bowel. I suffer from migraines and gout.

It gets even better for you. I’ve been blind in my right eye since birth. The moment I get some of your toxic orange tanning spray in my left eye, I’m done. You might as well be fighting Stevie Wonder. Wait? Is he Muslim?

Even your cornerman trumps mine. Chances are you’ll use your campaign manager, the diabolical Paul Manafort. If Manafort subverted Ukrainian democracy to curry favor with Vladimir Putin, what are the chances he’ll let the Russian dictator’s favorite U.S. presidential candidate lose to the likes of me?

And who will be my cornerman? Alas, it looks like it will be my friend Randy, an unassuming purveyor of antiquarian books and maps, a man who enjoys — get this, Donald — classical music. He is sooooo weak. No, really, it’s disgusting.

So, yes, you have every reason to feel confident, and that’s exactly what I want. Let’s see how confident you are when you’re picking up your teeth with your little orange Creamsicle hands as the War Memorial crowd pelts you with pocket-sized copies of the U.S. Constitution. Let’s see how confident you are when goofy Elizabeth Warren, wearing only a war bonnet and a rainbow loincloth, is racing through the arena on horseback screaming “Lock him up!” in her native Cherokee.

Will you cry, Donald? Please don’t do that. That would be disgusting.

See, Donald, I have a strong track record of holding my own against bullies and jerks far more formidable than you, and that includes one very tall, very nasty fifth-grader who picked a fight with me at recess. Yep, I kicked her ass, too, just like I’ll kick yours.