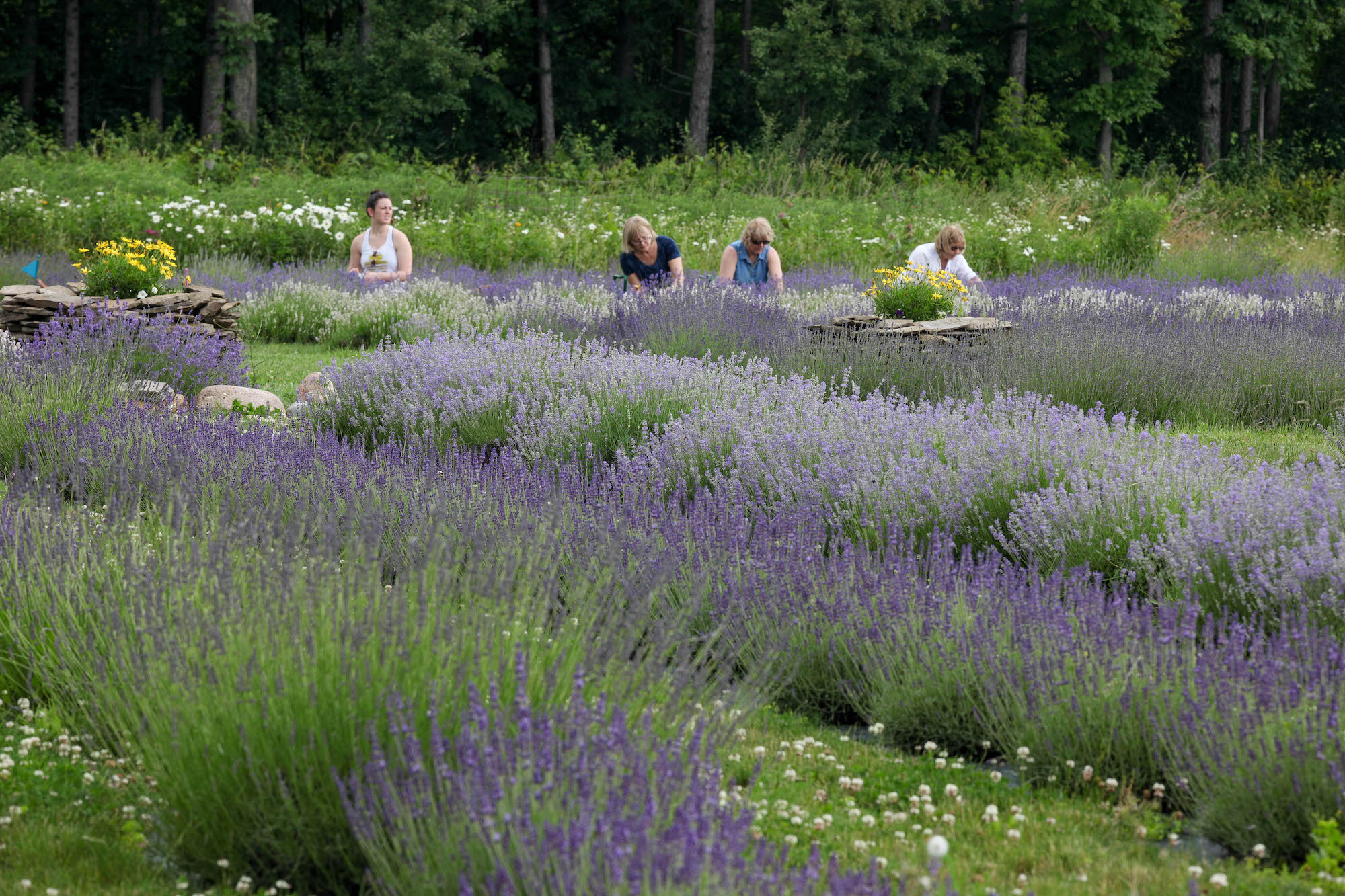 Looking out over the pretty, manicured rows of plants at Lockwood Lavender Farm, 1682 West Lake Road in Skaneateles, it’s hard to believe that they aren’t exactly meant to be there.

Growing lavender is not easy, says Karen Wheeler-Lockwood, who runs the farm with her husband, Gary. It turns out that the fragrant herbs with the iconic purple flowers aren’t so fond of Central New York winters. And they’re not crazy about our moist, clay-heavy soil, either. But the Lockwoods are undeterred. And their hard work has enabled them to successfully produce and market lavender as a key feature of their farm.

Each summer the Lockwoods host a celebration of their charming, labor-intensive crop. The 10th annual Finger Lakes Lavender Festival is scheduled for Saturday, July 8, and Sunday, July 9, 9 a.m. to 5 p.m.

“This farm has been in my husband’s family five generations,” Karen Wheeler-Lockwood says. “It was a dairy farm for many years. Now we have sheep. We have 120 acres and soybeans, corn, alfalfa, wheats and rye have been our cash crops. When we got married, I wanted to make my mark on the farm. I suggested that we try growing lavender.”

Gary Lockwood, a Cornell-trained agriculturalist, was on board with the idea, so Karen began researching what it would take to grow it in Skaneateles. Our damp climate makes growing lavender challenging because it is particularly susceptible to root rot, Wheeler-Lockwood says.

“There are many varieties of lavender, and the ones that many Americans are familiar with are actually grown in France,” Wheeler-Lockwood explains. “The climate there is not exactly like ours. But Gary’s agricultural background enabled us to figure out how to grow lavender here.

“It’s not the easiest thing to do,” she admits. “Lavender likes well-drained soil and full sun — not exactly what we have. We do lose a few plants every year to the winter freeze. Unexpected freezes in the early spring are always a concern.”

The Lockwoods planted their first lavender plants 13 years ago. They currently grow several varieties of lavender that harvest at various time throughout the summer. Folgate and Buena Vista varieties were ready for picking by the end of June.

The farm is open to the public on Saturdays, Sundays and Mondays, 10 a.m. to 5 p.m., in June and July. Visitors can pick their own bouquets, learn a little bit about how to use lavender in cooking, or watch a distilled oil demonstration. The farm has a detailed website, and visitors can check to see what varieties are being harvested before they plan their visits.

Wheeler-Lockwood says lavender has become increasingly popular for use in bridal bouquets, in part because of its fragrance, and also because it maintains its structure rather well when dried. In recent years there has been growing interest in essential oils and their medicinal qualities.

The Lockwoods run a small market on the farm, selling lavender soaps, lotions, balms, candles and sprays. Some products contain essential oils from their own lavenders, but those oils represent a very small aspect of the Lockwoods’ business. The products are also sold at a few local retailers, such as Natur-Tyme in DeWitt, Lavender Blue in Cazenovia, and the Rhubarb Kitchen Shop in the nearby village of Skaneateles. A sample of some of the lotions available at Lockwood Lavender Farm. Michael Davis photo

“The reason we started planting lavender was more so people could come and pick their own bouquets,” Lockwood says. “It’s a gift to allow people to come on the farm. Many people don’t have opportunities like this any more to come out and see a family-run farm.”

While much of the Lockwoods’ lavender is used right at the farm, local eateries have explored the herb in unique ways. The Sweet Praxis, a bakery in Syracuse’s Hanover Square, uses it in macarons, and Arctic Island in Syracuse’s Valley section initially used it for their seasonal lavender ice cream. The ice cream stand now uses lavender oil from another supplier, finding it easier to incorporate into the cream than using the plant flowers themselves.

“We have offered lavender ice cream for five years now. Karen did work with us in developing the initial recipe,” says Kristen Cuthbert, general manager of Broadway Café and Arctic Island. “It is really popular here, and we have a booth every year at (Karen’s) festival. People do come in looking for it now, because it is such a unique flavor. It’s one of the 12 to 25 flavors we rotate in seasonally on top of the 26 staples we carry all the time.”

In addition to lavender ice cream, Arctic Island sells lavender lemonade, which is also available at the festival.

Adding lavender plants to private gardens has also become more common. Local nurseries such as Sollecito Landscaping Nursery in Syracuse and Chuck Hafner’s Farmer’s Market and Garden Center in North Syracuse carry it, and report that while not a huge seller, lavender has a devoted following with local green thumbs.

“We have always carried lavender and offer different varieties depending on the season,” says Megan Sollecito, co-owner of Sollecito. Those seeking lavender for small home gardens indeed have challenges, she says, but the charm it brings is often worth the effort.

“Our growing conditions don’t match those in France, but it is growable here,” Sollecito says. “I have it in my own garden and I like it. It adds a wonderful element to a home garden.”

Wheeler-Lockwood says visitors often ask her about growing their own lavender plants. She offers what is best described as realistic encouragement. “I suggest that they do a test plot, and test their soil (lavender does better with a pH of between 6.0 and 8.0). Make sure the soil is well-drained. Once the plants are established, be prepared to do some pruning in the spring.”

She has also served as an adviser to Empire Farm Brewery in Cazenovia. Nick Irvine, director of operations, described Lockwood as “our wise voice of wisdom” for the farm’s latest agricultural endeavor. Irvine began exploring the possibility of growing lavender for use in Empire’s popular White Aphro beer last March. After several consults with Wheeler-Lockwood, about 100 greenhouse-grown plants went into the ground in June.

Irvine says Empire decided to plant Munstead lavender, an English variety. “It’s not the most aesthetically beautiful variety as far as its flowers,” Irvine explains. “But it seemed to be the hardiest variety for this area, and the best choice for what we need.” A bee lands on a stalk of lavender at Lockwood Lavender Farm. Michael Davis photo

Irvine says Empire Farm Brewery’s 22 acres includes a parcel that is particularly suited to the finicky herb. “We reached out to Karen every step of the way and we chose the location very carefully. We have one slope that is very well-drained and it’s pretty stony. We are excited about this new aspect of the farm.”

Irvine says while Empire will not be able to grow all of the lavender needed for the production of White Aphro, its presence on the farm will be another aspect of the farm’s commitment to educating its customers on the benefits of local sourcing. Empire Brewing Company will also have a stand at the Finger Lakes Lavender Festival, pouring (what else?) White Aphro.

Each year, interest in the Finger Lakes Lavender Festival has grown. Wheeler-Lockwood handles much of the planning herself, and has even designed a few of the promotional posters printed each year. The festival now includes numerous local crafters, musicians and food trucks.

Wheeler-Lockwood admits that the intrusion the growing festival brings to her quiet, working farm — which is also home to 66 lambs, 150 sheep and 10 bee colonies — can be trying. But she has many volunteers that help, and she loves her role in educating the locals on the lore of lavender.

“It’s very rewarding when people come and appreciate what you do,” Wheeler-Lockwood says, looking out over her fields, with their gentle slope toward Skaneateles Lake. “That makes it all worth it.”