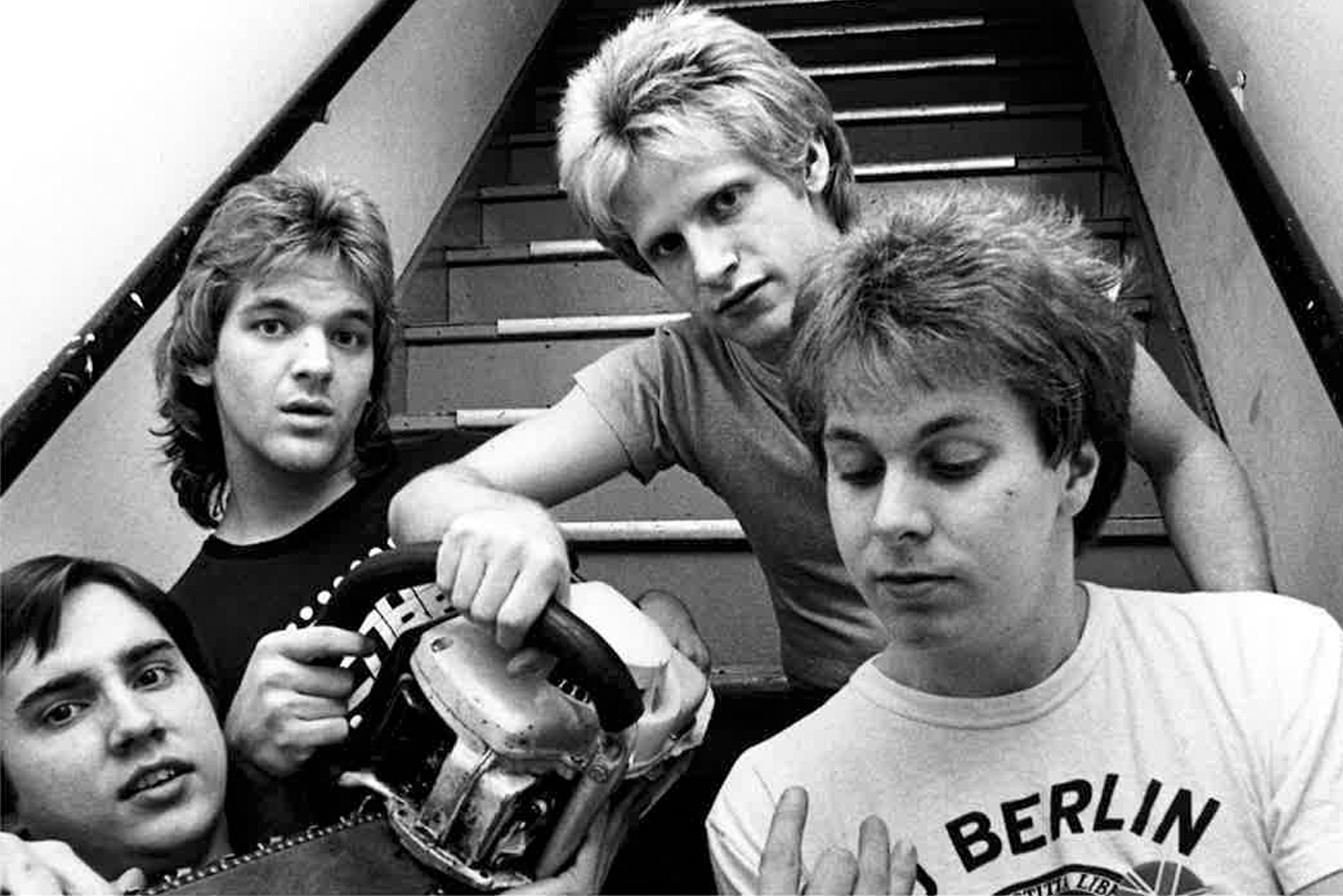 Funk ‘N Waffles, 307 S. Clinton St., will be a musical playground on Friday, Sept. 1, 8 p.m., as some of the loudest bands born in Central New York gather for Bright Lights, the third installment of the music series that pays tribute to the local new wave and punk rock scenes.

The show kicks off with Maura and the Bright Lights, a band formed several years ago featuring Syracuse-bred, New York City-based Maura and Peter Kennedy. Also on the bill will be The Trend and another band to be named, since the originally scheduled outfit The Ohms backed out due to conflicts.

The Flashcubes will headline with a celebration of their 40th anniversary. Paul Armstrong and Tommy Allen will be coming in from Boston and New York City, respectively, joining Syracuse-based band mates Gary Frenay and Arty Lenin. Tickets are $12 in advance or $15 at the door.

In a phone interview with Frenay, he noted that the band’s anthology double album, Flashcubes Forever, will be available for $20. “I was talking with a friend and asked him if $20 was too much,” said Frenay. “‘No,’ he said, ‘that’s about 50 cents per year.’”

Why are you excited to play with the band again?

Arty and I play live for a living, mainly acoustic gigs. The biggest difference when we step on stage as The Flashcubes is that it’s so freakin’ loud and aggressive, the likes of which I don’t experience anymore at my other gigs with The FabCats or other things we do. Tommy Allen is one of the loudest drummers on the planet. It starts with that and then everybody turns themselves up to be able to hear.

What was the idea behind The Flashcubes?

No one knew what to make of us. We worked at record stores and were Anglophiles. The British new wave scene was happening at the time, and the goal was to create a band like the Sex Pistols, The Jam and The Clash. In America we had The Ramones, Patti Smith, Blondie and Talking Heads.

We were hipper than the average kid, because we ordered all the imports. Arty and I were big Beatles guys. Tommy was a little younger and into Badfinger and The Raspberries. Paul is British-born, but moved here as a young kid. He’s always had a strong inclination toward the Sex Pistols and The Jam. He brought kind of an abrasive edge, the sort of Beatle-y harmony thing that Arty and I did, and then the energy Tommy had from the power-pop bands.

We were ahead of where local radio and local tastes were. We played places like The Brookside and The Firebarn. No one knew what to make of us. David Rezak from DMR Booking Agency, which still exists, booked us everywhere, including dive bars. People would look at us like, what are you guys doing? We were playing our own songs and Sex Pistols songs.

Before Armory Square was Armory Square, there was a warehouse where people threw sort of rave parties before that was a term. There was a new wave band that predated us called The Cuban Eels. We were getting ready at Paul’s apartment in Eastwood and someone wanted to take a picture of us. This guy asked where his flashcubes were. We’d already been practicing at that point and had been trying to think of a name. Paul and I looked at each other: Flashcubes, that’s a good name. Bright lights going off, excitement. Of course, we didn’t know how much of a dated term it was as the days went by.

Was there a moment that propelled your popularity?

Then Syracuse University kids found out about us. The majority of the student population came from downstate. They knew about bands like The Ramones and wore their T-shirts. They knew about (Manhattan club) CBGB. When they got word there was a new wave band, they flocked to us and encouraged us to play on campus. We played at Jabberwocky in, I think, December 1977. In six weeks, we’re on the cover of the Syracuse New Times. Next thing you know we have a huge following, thanks to these students.

At one point, around 1978 or 1979, Playboy did a feature on the coolest or weirdest new wave band names and we were on the list.

Was it good to play music that went against the grain?

When I think of and talk about the music scene, I talk about people who play their own music. That element of it seems to rise and fall. Dracula Jones in the late 1980s and early 1990s was a great original band and The Boogiemen, Masters of Reality. Those bands would have their own scene.

When we were The Flaschcubes there were a lot of bands around us, like The Ohms, The Poptarts, The Works and Tearjerkers. There was a whole scene. We started to see it rise and fall over the years.

Do you think Funk N Waffles will attract a younger crowd for your show?

What can people expect at this anniversary show?

A lot of older things we haven’t played in years. The band continues to play. We call them reunions, but we’re really a band that just plays once a year. We’ve been doing a modern Flashcubes show for the past 10 years.

The Trend is a really notable punk band. They were teenagers at the time. Their first single now sells for over $600 on eBay. They’re a riot. They don’t play for a living like we do, but they really bring it.

How is it performing today in the local music scene?

Good and not good. I consider myself the luckiest person in the world to do this. Arty and I are two of the lucky ones. I’m slowing down a little bit. I’m 64, so I’m trying to work a little less now. We have our friends and followers who come to see us regularly at the Dinosaur Bar-B-Que, the Sherwood Inn or the University Sheraton, where we’ve been performing happy hour every week for 17 years now. I think it’s the longest running steady gig in the history of Syracuse.

What went into putting this show and Flashcubes Forever together?

It was last December or January when I realized it was our 40th anniversary and we should do something. The first gig we played was Sept. 1, 1977, at The Brookside. The date falls on a Friday this year, so I called Charley (Orlando) at Funk ‘N Waffles, and he said he’d hold the date.

We started putting together a two-CD set. We had the tracks from a live concert we did a few years ago in Cortland. (Allen) is a producer and began to remix the songs from that. Then we started to assemble a disc of our loose tracks, B-sides, singles and others, a “best of” our studio releases over the past 15 years.

What was the appeal of British performers that attracted so many people, especially an American audience?

It was a reaction against the music of the 1970s, which was prog rock and classic rock, plus big hair and light shows. It was a reaction against the way things had gotten with Boston, Yes, Foreigner and all that. Sometimes you’d be applauding the light shows more than the music. New wave stripped it back down to two guitars, a bass and drums. There wasn’t a big production to the shows except for these exciting bands.

If you ever saw The Ramones live, it was an unbelievable experience. It was a dump truck blowing right through you. They were just these four guys with their bangs, leather jackets and the sound they created. We opened for The Ramones six times. Every time it was breathtaking to see them.

Do you have other Ramones stories?

The best and worst were at a show we played with them in Poughkeepsie. They finished recording the End of the Century album with Phil Spector in Los Angeles. I remember connecting with Johnny Ramone in the back room, because he was a big New York Yankees fan as am I. We were talking about recording with Spector, how he didn’t like it and how crazy Spector was. They would be in the recording studio and he would have a revolver sitting in his lap while mixing songs. This was kind of a precursor to years later when you found out what happened to Spector.

We got on stage to play and The Ramones’ fans, who clearly aren’t there to see The Flashcubes, are throwing sandwiches at us as we play.

In Syracuse we played with The Ramones at the recently torn down Uncle Sam’s on Erie Boulevard. It was for the premiere of their (1979) movie Rock’n’Roll High School. We played a set, they screened the movie and then The Ramones came on and played. And supposedly, someone told me, it was the first time they had seen the finished cut of the movie.

Any other strange moments?

When playing at this one bar in Middleville, I think it was The Loft, the owner was throwing ice cubes at us while we were on stage. We asked him afterward why and he said that he thought we liked it, because we’re punks and wanted to be abused.