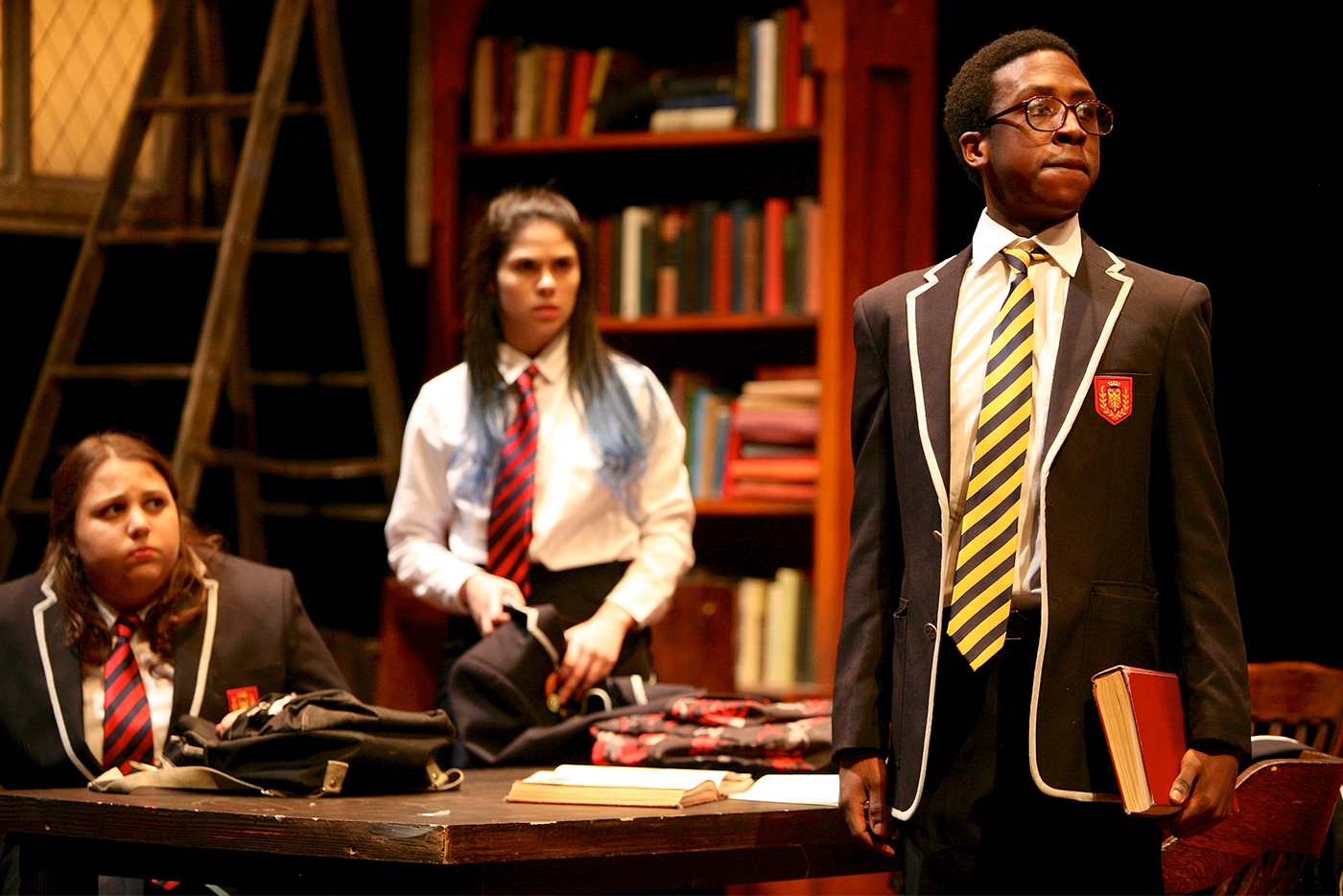 Syracuse Stage brings us back to high school in “Punk Rock.”

The name of playwright Simon Stephens signals that Punk Rock is not a musical, despite the title. Stephens, better known for his many adaptations, like his 2015 Tony Award-winning The Curious Incident of the Dog in the Night-Time, is a genuinely hot young property.

Although he’s making an area premiere in this Syracuse University Drama Department production, readers of The New York Times will know him as the scribe most often championed by top critic Ben Brantley. Part of the reason to see this production is to see and hear what all the talk has been about.

As the action begins we feel we might be coming upon a British version of The Breakfast Club. In the United Kingdom, class lines are always more visible. We’re in the library of Stockbridge School, which appears to charge high tuition but suffers from unprestigious geography. All the students are age 17 and in the equivalent of senior year.

Not only are they facing the pressure of examinations, but each is deeply insecure about what is about to happen to them. When newcomer Lilly (the compelling Isabella Moore) lets on that her father had previously taught at Cambridge University, a palpable chill descends on the listeners. But she offers relief with cracks like, “They were rude, horrible pigs … really rich and stupid.” Although the seven principals may generally resemble figures from other teen dramas, such as the brainy nerd, the bully and the jock, just as happens in real-life high schools, Stephens invests each of them with individualizing, sometimes surprising detail. We learn about all of this in dialogues that are longer and subtler than are found in many American dramas or movies. In this instance, Stephens is closer to Anton Chekhov than he is to John Hughes. Not one is the kind of character on whom we are supposed to pin our affections. We are detached, not rooting for anybody.

Perhaps the most Chekhovian of them all is William (Cole Francum), who appears first. Stammering and nervous, he might be seeking approval in the way he chatters on. He can open people up, however. In a lengthy dialogue with Lilly we learn that she cuts her arms where the scars don’t show. He lacks the pathos of a Chekhov loser, though. Only gradually do we realize that William’s more startling statements are not to be believed.

Initially easier to understand are Bennett (Ezekial Edmonds), the boastful alpha dog, and his brainy but insensitive girlfriend Cissy (Bryn Dolan), who submits to him. Cissy’s more perceptive pal Tanya (Rose Gulant) sees what’s happening, but from insecurity over body issues clings to Cissy without complaint. Studious Chadwick (Justise Hayward) keeps his head down and tries to avoid conflict.

Finally athlete Nicholas (Matthew Mueller) arrives late and stands apart. He does not dominate the girls, as cliché would have it, but he quietly has blocked William’s intentions for Lilly.

Given that all the students wear uniforms (designed by Kiersten Kosbial) and do not take drugs, they might appear to be more pleasing to their parents than many American counterparts. If that were so, why is the play called Punk Rock? At intervals the bookcases in Robert John Andrusko’s set rotate while we hear sound designer Jonathan R. Herter’s blastings of several punk rock tracks as figures in fright costumes, the demonic, id-driven counterparts of the students, cavort in their same space.

The music expresses all that has been unsaid. We know from early in the first act that something dreadful is coming, but we cannot name it. One of these kids is going to explode. It could be any of them.

Each of the characters is united in tension, of which the most overt is between the sadistic Bennett and the intellectual Chadwick. As Bennett, musical theater major Ezekial Edmonds, last seen as Fred/Petruchio in Kiss Me Kate, has some of the hardest work to do. Fair-haired and slender, he’s not the swaggering sadist from central casting. His bluster arises in part from a cover for doubts about his masculinity.

Justise Hayward as Chadwick is the only black player in the company, apparently director Robert Moss’ decision and not prescribed in the text. William’s abuse never cites color. Chadwick would be set apart from the others even if he were not the only non-white. Always alone, he nonetheless has a sense of self, as shown in the ostentatious fur collar on his coat. He may look frightened when Bennett humiliates him, demanding money and smearing his mouth with lipstick. Chadwick gamely affects unconcern at his treatment but responds with a display of his erudition, a vision of the cosmos emphasizing everyone’s insignificance in it.

Veteran director Moss, former head of Syracuse Stage, delivers some of his finest moments in the Bennett vs. Chadwick encounter. The predations of the strong over the weak might be commonplace on stage, but Moss reminds us that this one is anything but cliché. Both sides come with ambiguities, Bennett’s weaknesses on one hand and Chadwick’s reserves of self on the other. The scene ends with foreboding rather than resolution.

The program for Punk Rock states that the show will be performed without intermission, but thankfully this is not true. Warnings of pistols being fired on stage, however, are justified. Events of the play are inspired by news stories you might have read about as well as by playwright Stephens’ time teaching in a school like Stockbridge.

This production justifies Ben Brantley’s high opinion of the playwright. English school kids, in accents well-polished by dialect coach Celia Madeoy, use more considered language than ours do, and they don’t give everything away on top.