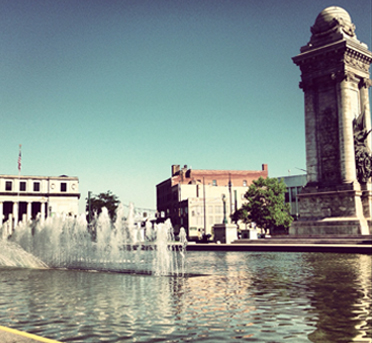 Our area is going through some transitioning

There is apologies in regard to this post and your weekly Thursday espresso shot. My bones were a bit rattled on Sunday morning, which eventually graduated from shaking my person in the physical sense to the mental sense. If my posts turn out to parallel a sidestep of a Luis Buñuel creation, it’s because a haze of daze is still hovering around my head. Deciding to go with this route could lead to repercussions. Oftentimes there are serious consequences of car accidents, and it is fortunate to say that no one was injured the other day, just vehicles.

Construction is a constant in the Syracuse and Central New York area. It’s frustrating, because it prohibits us from getting from starting points to destinations in the route that we all prefer. With construction comes new traffic patterns, and there may be some changes to our familiar routes. This includes lights and signs, which may be placed uncharacteristically or held by human traffic directors. Before all of this, it was important to pay attention to what was going on, and it’s even more detrimental that your eyes are focused ahead. And regardless of three-colored traffic lights, they will usually fall back on switching to blinking red lights when accommodating traffic (this means you don’t have to wait in lines all that long, for all you pounding your fists for getting every red light on your route). Patience is a virtue.

Perhaps it comes with being too trusting, figuring that we Central New Yorkers are used to driving around town, but there is that one moment where things don’t go according to plan. A cop pulls up perpendicular to you, and this makes you stop for that extra second longer before proceeding. You go, see another car coming from that perpendicular direction, and they’re going to slow down. And out of your peripheral vision you see the other car still coming, unyielding or slowing, and you make eye contact with the other driver when you realize they are not going to stop. Your mind reminds your body to brace itself, which often leaves your lips in the form of an “Oh, shit” or your other favorite curse. Your eyes close as your hands grip the steering wheel harder. A deep breath is taken.

The world goes silent right before and upon the impact of car-hitting-car, that explosion is the only thing that is heard until everything settles. And most of the time, including a witness or two, people don’t stop.

After the the emergency vehicles arrive, people still don’t stop properly at the blinking red light. Do drivers not see the result of what transpired? At least the other person involved got their car to the gas station; the other was backed up a couple feet to the side of the road. Just because the cop is filling out the report, it doesn’t mean drivers get a free pass in not taking precaution, not stopping as they should. People say others from certain parts of the country drive like idiots, what does it say about us? We seem to ignore the little things.

And it was eerily silent until the door was opened. Where as if this was some movie, some music would have been playing over to cover potential acting. The kids in the other car were screaming in the parking lot.  It’s rare a director would keep such reality in the scene. If it was an action movie, some overproduced metal band would have been featured. With a drama, perhaps Explosions in the Sky or This Will Destroy You. A comedy, well, “Bistro Fada” by Stephane Wrembel could somehow be fitting.

If you’re not familiar with the above, if you attended the Candlelight Series in Armory Square, Saturday’s performance of Loren Barrigar and Mark Mazengarb covered the song. “Bistro Fada” was injected with a segue to Rodgers and Hammerstein’s “My Favorite Things.” This was actually noted by a few local social media interactions. The main song, which was neglected by the social media ado, plays a large part of the soundtrack to Woody Allen’s masterpiece, Midnight in Paris.  This song often accompanies Owen Wilson’s charming and nail-on-the-head Woody-Allen-not-played-by-Woody-Allen character. Wilson’s Gil eventually meets Luis Buñuel, who is mentioned at the very beginning of this post, who is associated with the surrealists that could inspire this segment to embark on an interesting tangent.

And despite the necessity for a car or public transportation to effectively get around Central New York, our City of Syracuse is very walkable. This past weekend was mind blowing in the sense that there was maybe too much to do. Aside the consistent few art and theater shows that occur on weekends, aside Harborfest taking place in Oswego, Downtown Syracuse was filled with and not limited to: St. John The Babtist’s Ukranian Festival, the Arts & Crafts Festival, artists creating sidewalk chalk pieces, the Stage of Nations Blue Rain ECOfest, the Northeast Wine & Jazz Festival, and the Candlelight Series mentioned above.

Those visiting had their minds blown. One could literally walk around the city’s squares in a giant circle and participate in events that make our city busy, family-friendly, and fashionable. The soundtrack of our city is eclectic, from the street musicians or to indoor and outdoor stage performers. DestiNY USA could have stolen the Dining Week concept away from the city it’s parasiting off of, but it cannot take away all the events that help define our home.

And if it isn’t broken, don’t fix it. We have this to look forward to every summer. We squeeze a lot in every June to October, because the weather is unpredictable. Most of the time it’s snow and the occasional storm with high winds, which make us feel lucky in comparison to many of our stateside friends, those who we know and do not know, who are still rebuilding after the more severe weather and environmental factors that have taken so much away.

The view from the road at a damaged car isn’t so bad. It could present a financial burden should a new car be needed. It could have been worse, and those involved can thank their lucky stars. As we looked at the scene — I looked at my parents, who arrived quickly to help out, and who I’m lucky to have at such a close distance — I said, “So much for those new hubcaps.”

Folks, our area is going through some transitioning. Let’s do our part in becoming safer drivers, being more aware. If you have a smart phone addiction, put the device in your glove compartment and play music so you can’t hear it. There’s a lot of construction going on, which shouldn’t be an excuse to pay attention to the world around you. Between Sunday and today, being skittish isn’t so much fun; being hyper-aware and critical of those around me, swearing under my breath at you all, isn’t a psychological treat. An accident that causes your car to pull a 180 shouldn’t have scare you straight. Yeah, to blatantly point it out, this post has circled back around again. Now, if we could only throw in a couple instances of sacrificial blindfolded lambs, and this will become a party that no one would ever want to leave, whether they had that choice to or they couldn’t figure out why they couldn’t …