Anti-drone activists explain why they rally and, sometimes, go to jail

Bonny Mahoney stood perched atop a ladder in a blue jumpsuit with a handmade “drone spotter” sign on the back. She peered through a pair of binoculars, looking toward Hancock Field Air National Guard Base. Suddenly, with a buzz growing louder in the background, she shouted, “The drones are coming!”

Then, about 50 people standing in a yellow protest pen in front of the base fell to the ground. They moaned and writhed, until they fell still on the grass, their clothes speckled with dots from the beginnings of a light rain.

And then a few minutes later, they were back up again. There wasn’t a drone strike, but somewhere in the world, it was happening. And that’s what the protestors were trying to demonstrate. 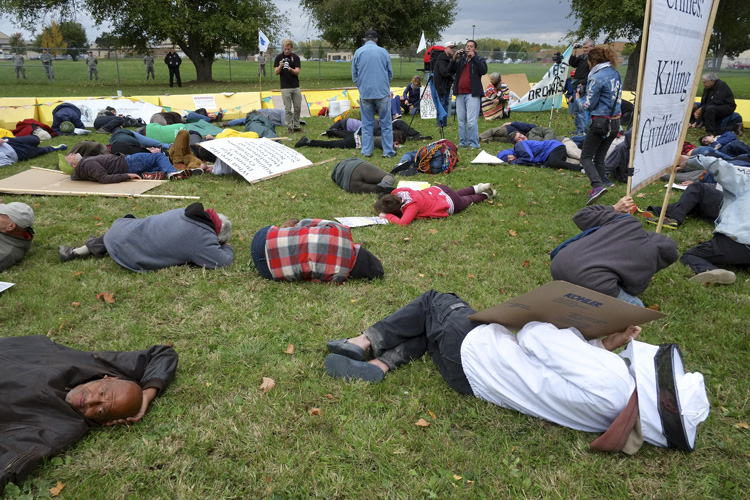 About 50 people standing in a yellow protest pen in front of the base fell to the ground.
Michael Davis Photo | Syracuse New Times

On Sunday, Oct. 5, protestors from Syracuse, Rochester, Binghamton and New Haven, Conn. gathered at Hancock Field as part of a Global Day of Resistance against military drones. Hancock is home to the 174th Attack Wing of the New York State Air National Guard, which mans military MQ-9 Reaper drones. In 2009, the focus of the base shifted to drones, and it serves as a major drone training center for the National Guard.

Protests at Hancock aren’t anything new for Upstate Drone Action, a group of activists working to call attention to the issue and to “ground the drones.” They’ve been protesting at Hancock since 2009.

“We were looking for a way to make war real to people,” said Carol Baum, of Upstate Drone Action. “Because for so many people war is out there and far away. And yet, here we are actually participating in the war effort with most people not even knowing about it.”

They gather at the base twice a month to voice their concerns. They’ve organized protests, rallies and marches. Many of them have been arrested. But it’s all in service of the cause: calling public attention to a not so distant war. Drones, they say, are changing the way that people look at warfare. Drones keep American soldiers from having to go to war. They keep soldiers safe. They’ve made war and killing “sanitary,” Baum said. 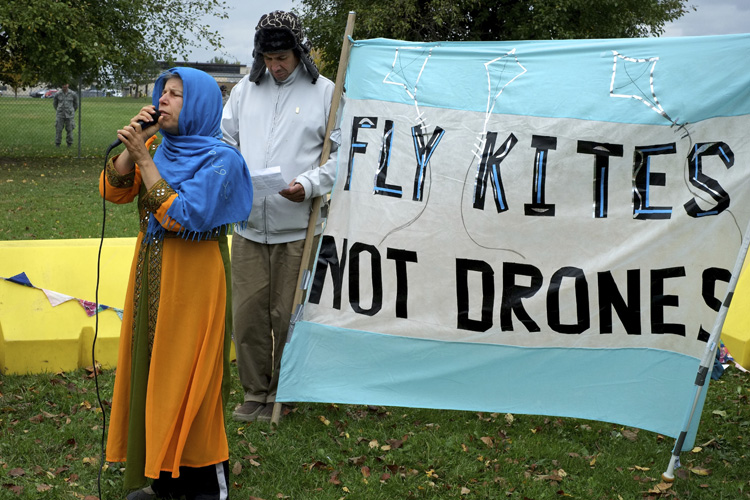 Though it may be called something else — in this case, a drone strike — it’s really just war, plain and simple, the activists believe.

But with thousands of miles between the warring parties, it may not be quite as difficult to push that button and know a bomb has been dropped and lives have been ended.

“It’s a hell of a lot harder to take a bayonet in 1917 and stick the bayonet in the soldier’s gut and twist it around and know that guy is dead,” said Rae Kramer, an Upstate Drone Action member.

Protesting the base’s use of drones hasn’t always been easy. While at the base, protestors have been arrested, some of them more than once. For some, the arrests have few consequences; others face jail time. 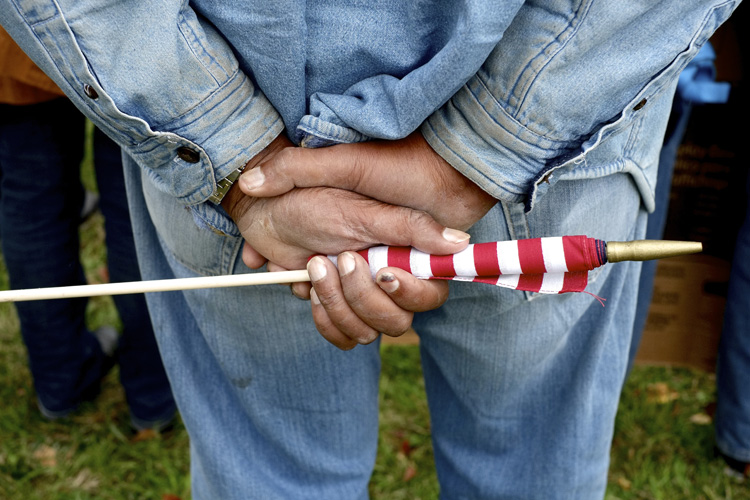 Protestors have been arrested, some of them more than once.
Michael Davis Photo | Syracuse New Times

Spending up to two years in jail is a possibility for Mark Colville. Last month, Colville, 53, was convicted of five charges, including violating an order of protection. The order requires him to stay away from the base’s commander, Col. Earl Evans. When Colville tried to deliver a “people’s order of protection” and flowers to the commander, he was arrested.

Colville is one of several protestors to be served with an order of protection. These orders require protestors to keep their distance from Col. Earl Evans, his home and his place of work. 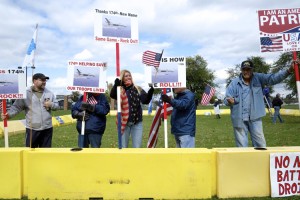 “An order of protection is issued by the court to limit the behavior of someone who harms or threatens to harm another person. It is used to address various types of safety issues, including, but not limited to, situations involving domestic violence,” according to nycourts.gov.

Colville said he believes orders of protection given to drone protestors like himself are a “misuse of the law.”

Baum, a member of Upstate Drone Action, agreed that these orders of protection should not be sought against nonviolent protestors. Most of the protestors haven’t had contact with the commander. They don’t know what he looks like or where he lives. The only part of the order of protection that is applicable to them is keeping away from his place of work.

“The big question people had was, ‘What does he look like? Who is he?’  There’s a whole thing about staying away from his residence. Where does he live? Who is this guy?” Baum asked.

Still, the protestors don’t let the risks distract them from their goal. They must deal with cops and courts and orders of protection, but when doing so, they focus on their cause. 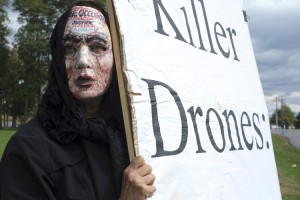 He came from New Haven, Conn., to participate in the Oct. 5 protest. Though he’s not a member of the Syracuse community, Colville said he thinks it’s important to protest on behalf of the community, which he says has become a legitimate military target without the consent of its people.

“Did anybody participate in a discussion about that?” Colville asked.

Most people, at least the ones Colville knows, don’t want to be told about these issues and what goes on beyond the base’s gates because, as Colville put it, “knowledge brings responsibility.”

But Colville does know. And that’s why he drive about five hours from Connecticut to Syracuse.

“Their consciences can be moved, as well,” Colville said. 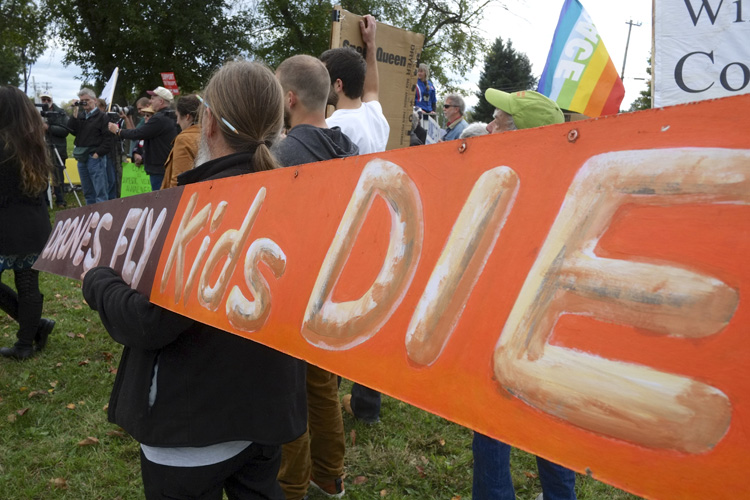 Jim Clune, 67, of Binghamton, has been arrested at Hancock three times. But he keeps coming back.

Clune protests in an attempt to “stay human in an empire.” He said we have become a violent people, constantly creating war to make our lives more comfortable. Clune’s concern for society, along with his concern for the victims of these drone strikes, is what keeps him coming back.

“I may not be able to change things, but I at least don’t want to be changed,” he said. “I want to be human.”

The protest Oct. 5 brought about 50 supporters to the lawn in front of the base. They held signs and waved banners with phrases like “Drones fly, children die,” “Drones make killing easy” and “Fly kites, not drones.”

Representatives from several organizations and backgrounds — including veterans, mothers and beekeepers against drones — addressed the crowd, explaining their cause and why they wanted to ground the drones.

One of these speakers was George Payne, 33, of Gandhi Earth Keepers International.

Though Payne drove from his home in Rochester to attend the rally and offer his support, speaking on behalf of his organization and falling to the ground during the mock drone strike, he admitted that he didn’t want to be there.

“I’d rather be watching football with my wife,” Payne said.

“The truth is, I don’t have a choice,” Payne said. “It’s my legal obligation to be here.” Payne, like many others protestors, views rallies like the one at Hancock as citizens fulfilling their legal obligation to act when they see their nation breaking international law.

And that’s what it comes down to for many of the protestors: an obligation to uphold international law and an obligation to the men, women and children who are victims of these drone strikes.

The protestors may have to deal with the consequences of their actions, but that’s nothing compared to the “real victims,” they say.

Change for the Best of Reasons
News and Blues
To Top