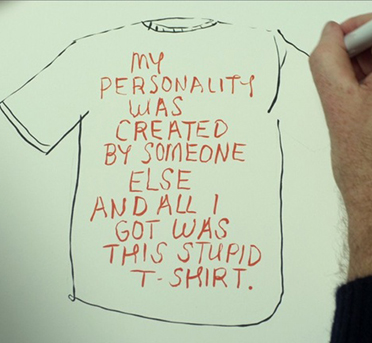 “I am not someone else, someone else is not me. Yet we are available in the same store. The store of Existence. This is how I think …”

Last week, Mike Mills’ Beginners was finally watched. Yes, finally. It’s been on my mind since 2011, when the movie’s trailer slapped me.

The story is told through a series of flashbacks as Oliver (Ewan McGregor) copes after the death of his father, Hal (Christopher Plummer). Oliver takes Arthur, his father’s Jack Russell terrier, into his care, and he meets Anna (Melanie Laurent). Throughout the movie, McGregor’s character struggles with coping, his parents’ relationship, and his own idiosyncrasies. The latter are clearly described and displayed by his parents, habits and quirks Oliver had adopted as his very own to define his insecure and lack-of-confident persona.

It proved to be one of those movies that needed a special moment to be watched and enjoyed. It was interesting in the sense that more was needed to be known. Despite the script being written in a sense that these filmmakers could have had a field day with, this was no Kaufman or Anderson (either Paul Thomas or Wes) or Gondry flick. Regardless, the cut-and-dry and it-is-what-it-is nature of Mills’ film will still cause you to smile. The soundtrack is as pleasantly simple, classic, and uplifting as you may presume it to be.

This two-part post is not about the movie. It inspired it.

We all have our quirks. There are many of them.

One of mine is collecting notebooks. If someone asked me how many I have, it would be answered with:

In one of my notebooks, which was actually stumbled upon with an utterance — “Oh, that’s where you ran off to!” — when coming across it, a paragraph was found in it. It can be described as one of my in-the-moment sketches, and it reads (with present editorial inserts to clarify):

“Life’s path (caret: your path) is going to catch up with you sooner or later, regardless of your location [geographical, personal, situational, occupational]. If you were supposed to meet a certain someone at the [for instance] grocery store one evening, [and] you decide not to go [to that specific store], the inevitable is only being postponed.”

This was probably written a year ago. It can be deemed as a “shit statement” or “shit philosophy,” and this designation is tacked to to the majority of my spurts of thought. No, I don’t think my writing — some of it — is shit. This is not to show negativity triumphs, which it does not. It’s to make me laugh and keep me writing/thinking, doing. We all do it: joke with ourselves to keep us going. After all, we do know ourselves better than anyone else … as much as we are in denial as we may be.

But that’s just me.

Here’s an exercise to try: When you look at yourself in the mirror each morning, ask yourself: “Reflection, how badly do you want to strangle me?”

It’s interesting to recognize who we are and the little things that we do.

We react to a variety of situations differently and with various emotions. Sometime emotions are not hidden. Some are to be experienced on one’s own time. There is no cowardice with the latter. How we embrace love, hate, death, joy, anxiety are beautiful in their own regard, but things should not get out of hand. One of the best places to express ourselves is the car. We can crank music, or we can drive in silence. We can yell, cry, curse ourselves out, sing to lyrics obnoxiously loud.

Another place is the bathroom. It’s where we start our days. It’s provides an excuse to walk away from our desks. It gives us shelter. It’s a pause from routine, life. Bathrooms are safe zones as much as places for relief.

We have our own ways of revving our engines each morning, our rituals and procedures when starting our days after we drag ourselves out of bed by the napes of our necks. Some of us comically roll out of bed, sometimes our animals help us (more on that later …), and sometimes the process is melodramatic.

While getting out of the shower the other day, my head pounding from a the presence of the supermoon (while doctors may diagnose it as dehydration and/or lack of sleep), I paused before opening the curtain. Is this really happening? It was literally yesterday, about 24 hours give-or-take a few minutes, that this whole hygiene thing was done, and we all do it more regularly — preferably daily — than not. Due to the unwelcome superpowers bestowed upon me by the supermoon, each water droplet dive bombing from my head sounded extraordinarily loud as it plummeted. If you’re one of the types to be inspired by showers — many creative minds throw together ideas while in the shower like Kramer fixes a salad — you recognize that the water pouring out is emphasized to a hypnotic point. You could be looking straight at the spout, focusing to the point where the stream actually separates into individual droplets before your very eyes. A specialized camera isn’t needed, because your eyes and mind work together as one already.

And all of this learned knowledge comes from living and listening to yourself, right? Your reflection can talk back to you even when you’re not face-to-face with it — it hides in your gut.

However, some people may not have it. Take for instance yesterday’s woman on Onondaga Road; the car she was traveling in was parked awkwardly on the side of the street. She was witnessed dropping trou in some person’s yard with a cigarette balancing perfectly on her bottom lip. Talk about disregarding your knowledge, ignoring societal norms and decency, and making an ass out of yourself … one ass anyone would prefer not to see again. That song that’s playing on the radio — whether the tune is a favorite of yours or not — is now associated with that crack, of a life moment.

Here’s when you change the station or track. You acknowledge you’re avoiding the song, you dislike it. You acknowledge your displeasure. You love that such noise causes you be miserable for a lip biting and lightning split-second, and you get off with acknowledging the joy of realizing that your cure is having the ability to move on. And we find ourselves back in the bathroom again. It’s a skipping record, no; it’s a different song with the same intro. It’s a chorus, a refrain. The post-shower mirror isn’t going to magically tell you what you’re going to do that day. Some people may or may not dream, and only half of those people probably pay attention to their dreams, which can actually tell you a lot about yourself.

After the morning routine of putting contacts in, shaving, and washing your face before getting to the nitty gritty and letting your mind drift to the point where you realize your longer shower is setting you back — you were in this spot the day before. Yes, the majority of the time, you’re actually Bill Murray in Groundhog Day, reliving practically the same morning after  morning.  You realize that you are waking up to the same song every morning, because that’s how Central New York radio stations spin. The more aware you become of yourself, your life and embracing how beautifully mundane it is, you’re Bill Murray in What About Bob?, realizing your actions as you take baby steps here and there. The next thing you know, you’re sailing.

And then, suddenly, you wake up. You’re in bed. It’s time to start the day.

“You gotta hold on, hold on through the night. Hang on, things will be all right.”

[To Be Continued Thursday …]

Christopher Malone plays with more thoughts and words at his blog, The Infinite Abyss(es), and at Kinani Blue. He can also be found creating worlds and playing with invisible objects with the Syracuse Improv Collective.  Feel free to tweet at @Chris___Malone, or email him atcspmalone@gmail.com.

UFO 1988 – A Reddish-Orange Thing, the Size of an Aircraft Carrier
Projecting, Part Two: Human Versus Companion
To Top