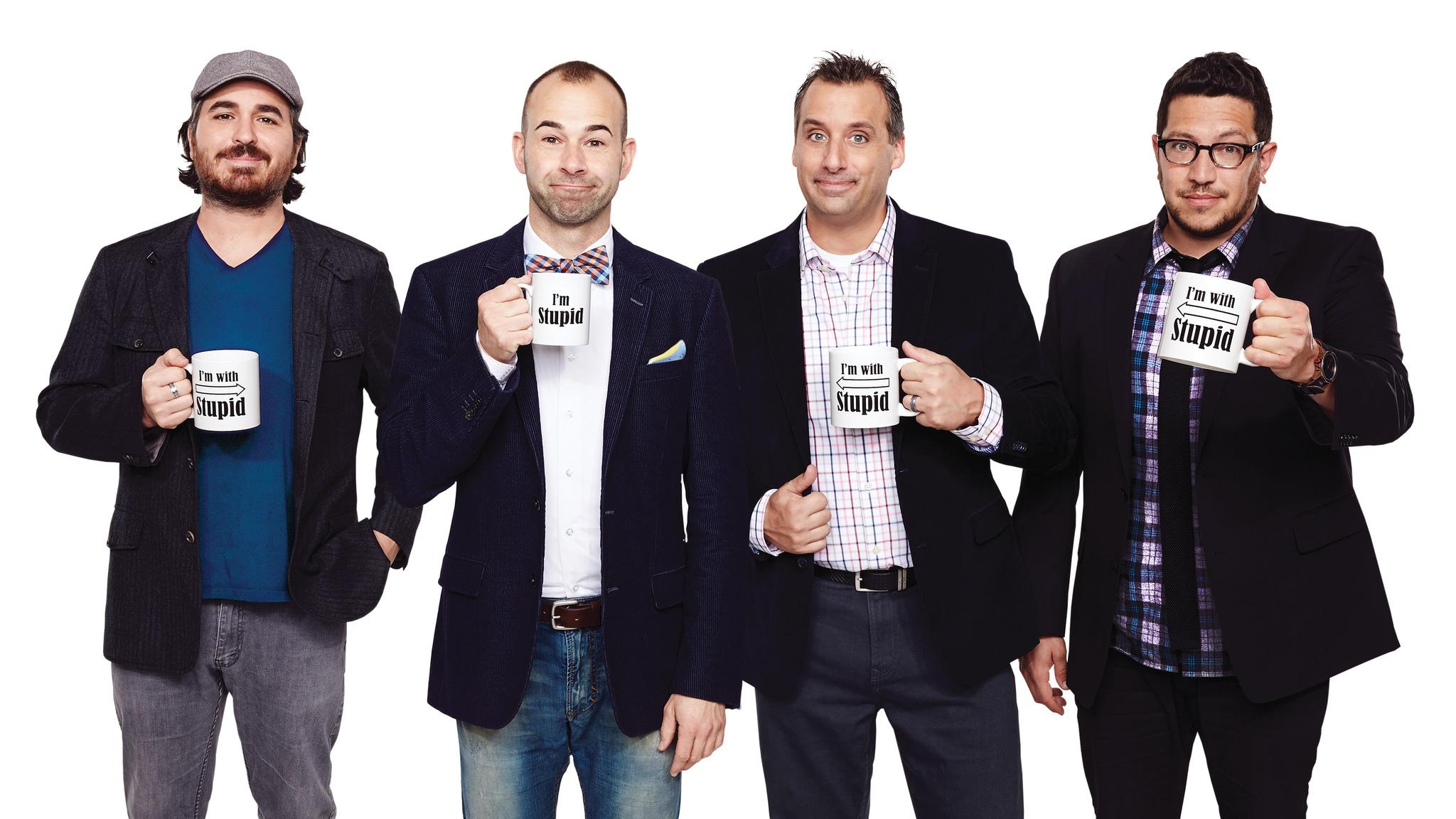 It’s all too familiar of a story: A group of guys who have been friends since grade school joke around and mess with each other. However, the only difference between one foursome of bosom buddies and the other is the simple fact Joe Gatto, James Murray, Brian Quinn and Sal Vulcano have a television show.

The Tenderloins, a comedy troupe that originated before the (Impractical) Jokers television show on truTV, returned to Syracuse for the third time. The “Where’s Larry Tour” was showcased twice the evening of Friday, Feb. 12. The original show at 7 p.m. sold out within a couple weeks of going on sale; hence, a second show was added.

The four began their spontaneous fun and roots to their now way of life by taking an improv class in high school. The name The Tenerloins was born, and they never let the momentum from that foundation cease.

Improv, the spontaneous, on-the-spot form of comedic entertainment has a variety of manifestations. There is “short-form” improv, which emphasizes game concepts and is featured on the television show Whose Line is It Anyway? Long-form improv is more story and scene-based. Actors, instead of getting familiar with tactics and a particular schematic, can use various forms can to play out spontaneous stories.

Compared to stand-up and sketch comedy — which often comes from improvised scenes — the intention is to be real and not try to be funny. Curb Your Enthusiasm, the Larry David show on HBO, featured improvised dialogue; the actors played their roles in staged situations. Where it may be funny to use a word of inspiration in short-form, using the suggestion from the audience in its literal sense is a faux pas; ergo, a word of inspiration is using the word to generate other words and concepts through association and inspiration.

Where one may feel as if they cannot improvise, well, all humans (and creatures) improvise on a daily basis. Communicating daily means improvising daily. It’s listening, talking and complimenting, or adding to what another is saying — the “yes and” concept. It’s not saying “yes” to everything, but it’s adding to. Even “no” can be implemented into the two-word mantra. This simple everyday fact and habit is the backbone of The Tenderloins. “We’ve been friends for 26 years. People respond to friendship,” Murray said. “This is what we hoped for.”

For those unfamiliar with (Impractical) Jokers, the four friends compete with each other in half-hour shows. They play games and each joker has to listen and do everything the other jokers tell him to do. Come the end of each episode, the losing joker has to endure the heat of embarrassment.

“[(Impractial) Jokers] is our third show,” he said. “We pitched to A&E and Spike.” It is clear that truTV’s taking a chance with the self-depreciating foursome has paid off.

Murray was once chained to a park bench where a guy wrapped a boa constrictor around him, milk was poured all over him by a heavy set guy sitting on the his lap, and then he was covered in syrup and feathers. Gatto once had to open the door to a bathroom and ask for more toilet paper while actually sitting on the can. Quinn had to give a book talk to children about poor life decisions. Vulcano had to make up and sing a song about dead butterflies to a baseball stadium.

The Tenderloins said each show in a particular tour has a similar format. Everything that happens between the segments is fair game. Stories change, audience interaction differs, and the comedic banter among the four of them is consistent heightening. The “Where’s Larry? Tour” similarly will have the same storytelling and lead-ins for the particular clips used from the show, B-reels, and comedic and physically synchronized bits.

Or are they synchronized?

During the show, Gatto addressed a 10-year-old, telling him that he was going to be hearing some naughty language, which lead to an on-stage discussion on whether or not to have a clean show. They played a game with an audience member, taking the person’s cell phone and sending an ambiguous text to a randomly selected contact: “I’ve tested positive.”

The full-house roared at the conclusion. It is appropriate to wonder — Why Syracuse? This New York-based comedy troupe has come to Central New York three times.

“We love Syracuse. There are memories attached to here,” Murray said. The last time we were in town (Oncenter in 2014), Joe (Gatto) told us he and his wife were expecting their first child.”

There wasn’t a dry eye in The Landmark Theatre. Maybe there were some churning stomachs — the last video the guys played was very a “consuming” and “crappy situation” to say the least.

With their fifth season now on the air, catch them every Thursday night at 10 p.m. on truTV, where they are able to travel, tell more tales and embarrass the hell out of one another on stage.