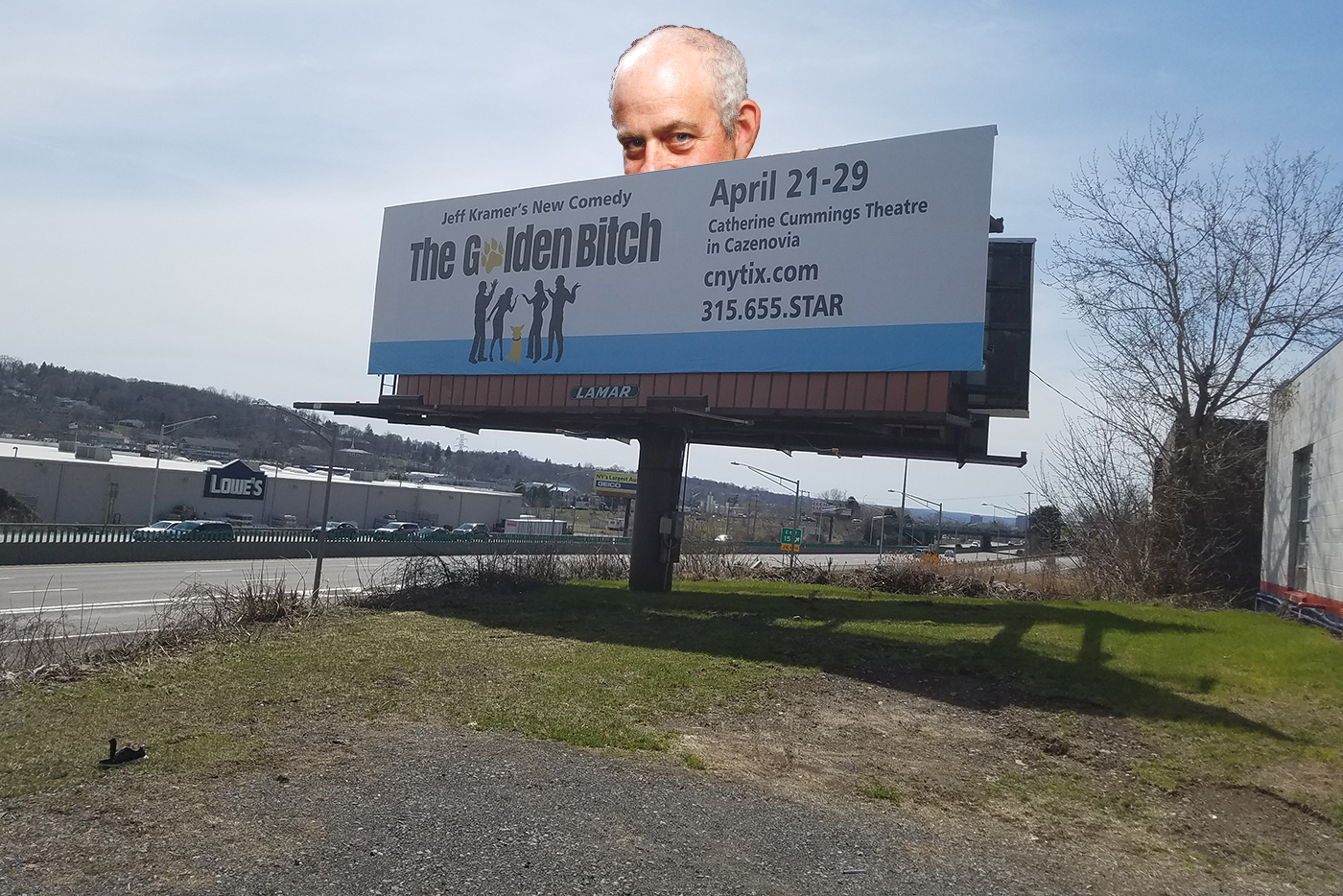 One of the great pleasures of this job used to be how easy it was to offend prudes and other censorious assbites. Hard as it might be for you younger people to believe, I once could generate angry calls and letters from readers merely for using a phrase such as “oral sex” or suggesting that smokeless tobacco is harmless for infants.

“As the mother of nine children, I was horrified to read in a so-called family newspaper your disgusting and gratuitous description of your dog licking its private parts. How is this news? Normally, I don’t even read your idiotic column, but when my 8-year-old looked up from his Cheerios and asked, ‘Mom, What does ‘power-washing the furry missile silo mean?’ I had no choice.”

Those were the days. Much of America had a huge stick up its keister. There were rules and standards that begged to be violated. And now? Here’s how far we’ve sunk as a society:

Earlier this month, billboard signage went up on the westbound side of I-690 advertising my new play, The Golden Bitch, which opens Friday, April 21, at the Catherine Cummings Theatre in Cazenovia. Lamar, the company that rents the billboard space, displayed the ad with a caveat: If the sign generated complaints by people offended by the word “bitch,” Lamar would remove it.

I objected, of course, arguing that the word “bitch” was being used properly — a reference to a female dog — and that the images of a canine and a paw print in the logo clearly put the title in context. Privately, however, I crossed my fingers and prayed for public outrage. When it comes to making a splash, billboards are good, but billboard controversies are better.

A grand, attention-getting, community-dividing fracas was in the making. I foresaw local TV affiliates documenting the removal of the sign. Then the story would go national, with defenders of the English language and the ACLU squaring off against self-appointed arbiters of public decorum. Next, I would urge my supporters to complain about any graphic pro-life billboards, especially those that link abortion to breast cancer — a flat-out lie. Our argument: We found those signs offensive. What’s fair is fair, right?

Mostly, I envisioned standing room only for all six performances of The Golden Bitch, with the controversy driving interest so high that the online ticketing service — CNYtix.com — would crash. With all that buzz, the next step would be Broadway.

Well, thanks for nothing people, especially you, Donald Trump. During the campaign, The future President Thorazine did such a good job of lowering the bar of what passes for acceptable discourse in America that my edgy billboard might as well be invisible. By press time, the 40-foot-wide sign had been up for nine days, and I hadn’t heard a peep from Lamar.

John Fehlman & Son Auto Services on Burnet Avenue owns the land on which the sign stands. It’s one of the few spots you can clearly see the billboard if you’re not driving on 690. John told me exactly zero customers have complained about it. He added that he hasn’t even bothered to read it.

That makes one of us.

WSYR-Channel 9’s Bridge Street host Tim Fox provided me some solace on Monday, April 17, when he required some on-air prodding by me to actually say “Golden Bitch” on the air. Also, some of the posters around town promoting the show have been curiously removed.

At least one was taken down by a business owner who yielded to a mother’s complaint that seeing the word “bitch” was somehow detrimental to her children. Whoever you are, ma’am, please accept a sincere thank you from the cast and crew of The Golden Bitch and from Cazenovia College, which is helping me produce the show. It sounds like you know a lot more about the word “bitch” than we do.

Alas, in the dog-eat-dog world of event postering, the majority of my missing posters were probably removed by other publicity hounds scavenging for free advertising space. Some of these bottom feeders are so ruthless they’d yank down a Make-A-Wish Foundation flyer to hawk their 16-year-old Bowflex trainer.

Not that any of it makes a difference now. I’ve wasted money on a controversial billboard that isn’t controversial and on posters that many people actually like. Besides, Cazenovia is like, 200 miles away or something. Who’s going to travel that far to see a stellar cast perform a savagely funny new play about people who rescue dogs?