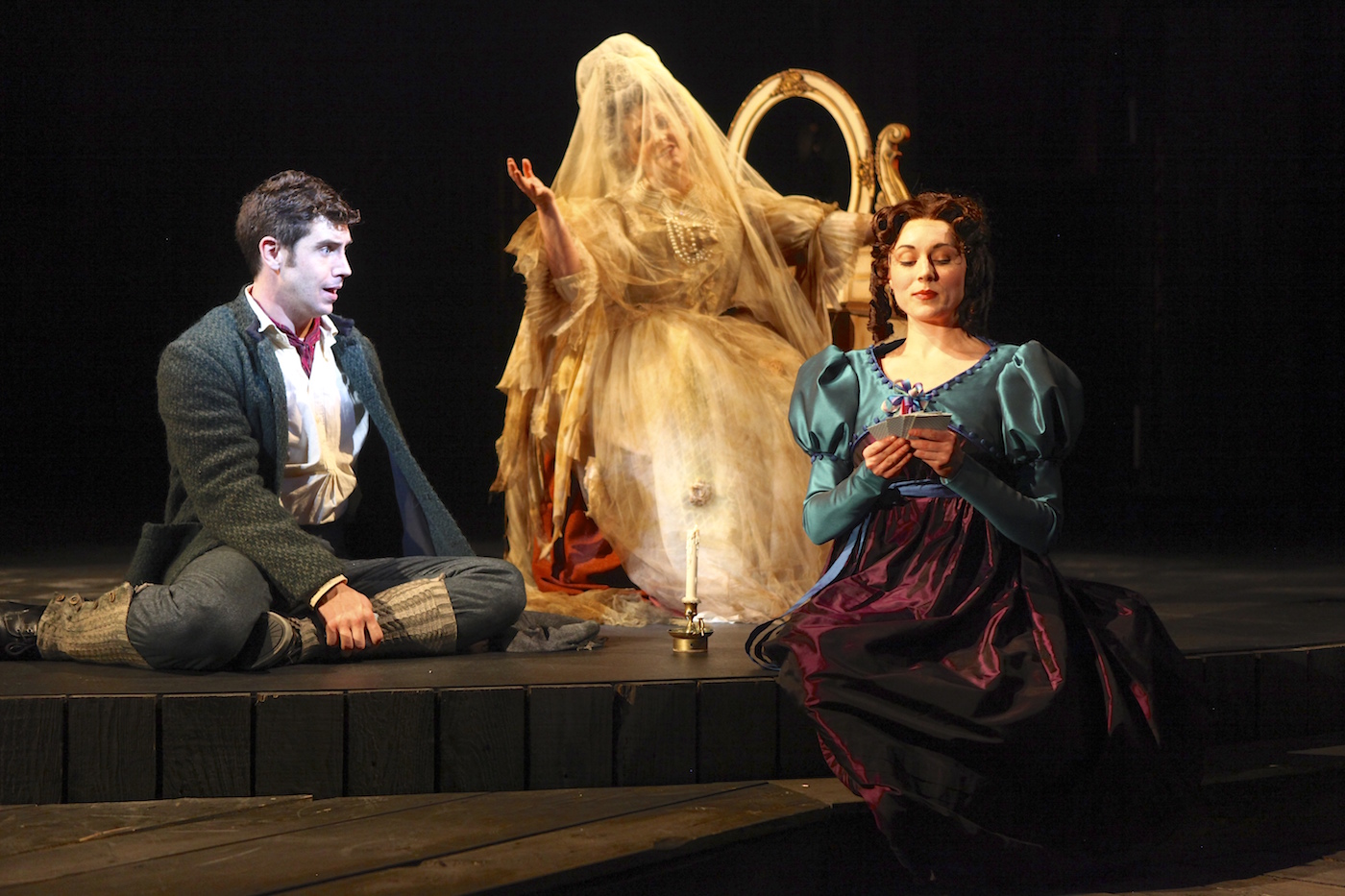 When theatergoers hear that Syracuse Stage’s season opener of Great Expectations (through Nov. 6) features a whopping cast of six, count ’em, six players, the initial reaction is that the show will be more of a lampoon, akin to other productions such as The 39 Steps and Around the World in 80 Days that offer quick-change artists scampering about in multiple roles.

The expectation that the 1861 Charles Dickens classic will serve as farcical fodder never materializes, however. This sweeping adaptation by Gale Childs Daly offers lots of diverting challenges for its game cast, all of whom are up to the task. And that sense of fun spills over to the rapt audience, even as the many characters begin to pile atop each other.

Even for the uninitiated, Childs Daly’s sleek approach to the original 500-page tome will leave few perplexed by the constant comings and goings. Protagonist Pip (Robbie Simpson) begins his long process from orphan to gentleman, thanks largely to a mysterious pair of adult benefactors.

The escaped convict Magwitch (Anthony Cochrane, with a lowdown Bob Hoskins accent) starts Pip on his journey. Meanwhile, the curdled Miss Havisham (Linda Mugleston), spurned years ago at the altar (her uneaten wedding cake is Exhibit A regarding her hatred of men), threatens to ruin Pip’s chances for happiness by sending her bewitching ward Estella (Marina Shay) to seduce and abandon him.

Along the way, Pip’s progress as an ambitious gentleman also threatens to transform him into an upper-class jerk; at one point he even disdains his longtime friendship with his blacksmith brother-in-law Joe (William Oliver Watkins). Robbie Simpson, the only actor who doesn’t have to switch characters in this production, nevertheless expertly charts Pip’s moral shifts while always retaining his essential goodness, such as secretly supplying needed funds to help bankroll the business venture of his chum John Wemmick (Seth Andrew Bridges).

Director Michael Bloom quickens this Dickens with smooth aplomb, as he negotiates the many costume changes that come with the colliding character arcs. The rotating turntable set from scenic designer Michael Schweikhardt is an indispensable asset for Bloom’s artistic vision, most memorably in the dazzling, nautical scene concerning Pip and Magwitch’s rowboat escape from the authorities.

Childs Daly’s multiple-role approach is also much less of a gimmick when it actually enhances several of Dickens’ characters. Instead of having separate players incarnate Estella and Biddy, the latter as an unrequited love interest for Pip, actress Marina Shay easily shifts in successive scenes from Estella’s haughty, unattainable femme fatale to portray Biddy’s virginal sweetness.

Five members of the Great Expectations cast also get to humorously cut loose with two plays-within-the-play interludes, as Pip takes in productions of Hamlet and a Gilbert-and-Sullivan type of musical opera that are mounted by a rowdy theater troupe. The performers’ overt exuberance plays to the back row, and perhaps into the lobby as well, during these scene-stealing treats.

Great Expectations officially kicks off the tenure of new Syracuse Stage artistic director Robert Hupp, although former artistic director Timothy Bond actually plotted the 2016-2017 schedule before his departure. Hupp could not have asked for a more endearing parting gift.

Get Your SALT Tickets Now!

The evening will be co-hosted by Rita Worlock and Abel Searor. Theater fans should get there early to enjoy some cocktails at 6:30 p.m. before the show starts. Discounted pre-sale tickets are available for $21 until Thursday, Oct. 27. Tickets at the door will be $25. Cash or credit cards will be accepted. Visit syracusenewtimes.com/2016-salt-award-tickets for details.