Some people collect gems and jewelry. Others are on the hunt for antique clocks and watches. And there are those who can’t say no to old books, magazines and postcards.

Covered casseroles share space with glassware and family keepsakes in a tall hutch in her dining room. In the kitchen, Pyrex ware of all shapes, sizes and hues is stacked neatly in cupboards, holds leftovers in the refrigerator and even cradles her sunglasses on a shelf. Still more is packed away in boxes in the basement.

“I couldn’t even count how many pieces I have,” says Neidl, who lives in Baldwinsville with her husband, Terry, and son Hunter. She’s an English teacher in the Baldwinsville Central School District.

“I can’t use everything and I can’t display everything. I used to categorize and chart and photograph them,” she adds, surveying a spectacular array of pieces covering a long table. “I would say 500,” she concludes. “Not counting lids.” 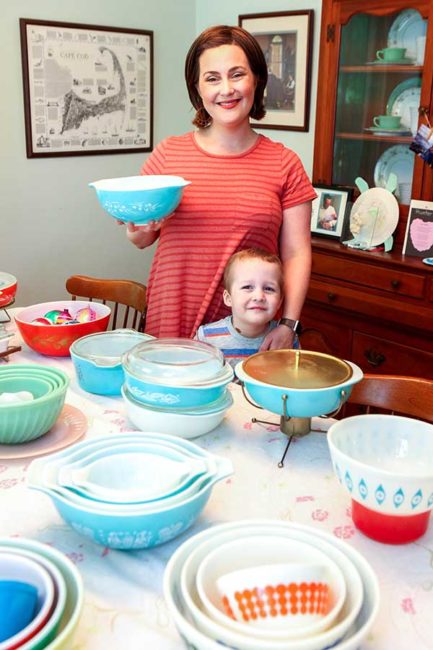 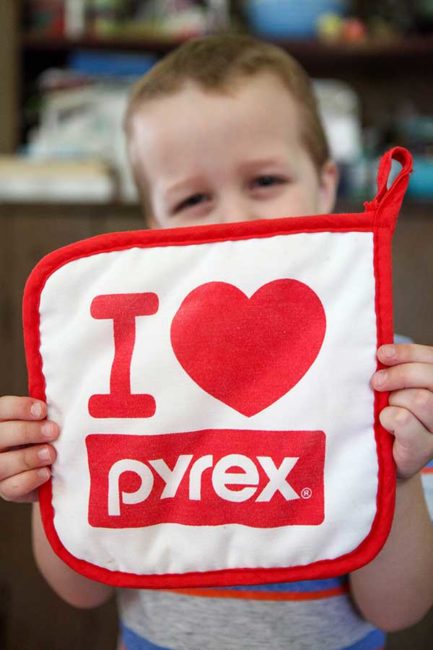 Neidl’s love for Pyrex is admittedly over the top. But rare is the person who doesn’t own at least some Pyrex, be it a pie plate, refrigerator set or, if you’re lucky, the classic, workhorse nesting bowls in primary colors. Washed by hand and stored with care, they retain their signature colors and keep going strong, ready to be passed on to or purchased by a new generation of Pyrex faithful.

Sarah Spataro and Jessica Johnson, assistant managers at Syracuse Antiques Exchange on North Salina Street, enjoy collecting Pyrex as well as seeing it leave the multi-floor emporium for new homes. They say movies and TV shows, as well as mid-century-inspired home styles and kitchenware spotlighted in “look books” from retailers like Crate and Barrel and West Elm, help to keep the flame burning for vintage Pyrex.

“Why buy new items when you can hunt for the real thing?” Spataro says. “Plus, Pyrex is still durable and safe cookware no matter if it’s vintage or new, and I think that’s important to a lot of people.”

Stephanie Neidl’s collection began with a few pieces handed down from family and a set of Butterprint Pyrex (turquoise on white, with an Amish print) that her husband and mother-in-law found at a house sale. Things took off from there.

Early in their married life, before closing on their house, the Neidls lived with Terry’s parents for a couple months one summer and spent weekends visiting thrift stores, estate sales and flea markets — and coming home with more vintage Pyrex. 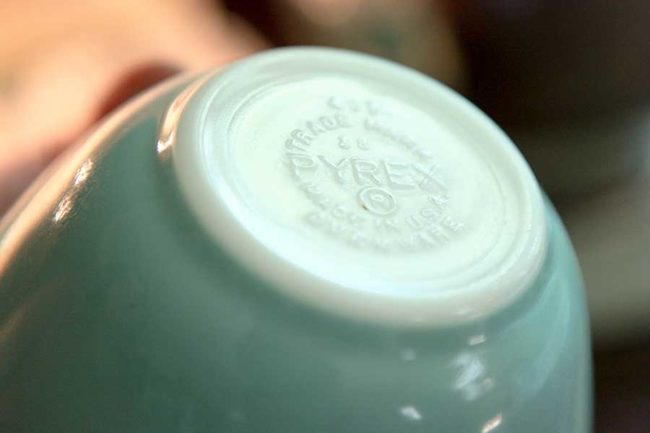 The tell-tale brand embossment on the bottom of a vintage Pyrex bowl. (Michael Davis/Syracuse New Times)

A couple years later, while treasure hunting in the Finger Lakes, they stopped at a sale and stumbled upon a trailer full of Pyrex still in its original boxes. That was Stephanie’s introduction to Delphite blue Pyrex, sometimes called Bluebelle, which has become one of her favorites. It’s gray-blue throughout, with no designs or patterns.

Delphite was produced for a short time around 1960, she says, and commands high prices because it can be hard to come by. Until that time, she had only seen it in pictures. “It was kind of surreal,” she says. “It was really cool to see that much Pyrex, all in one spot.”

Pyrex is a brand name for temperature-resistant glass cookware and ovenware developed in 1914 by Corning Glass Works (now Corning Incorporated) in Corning, New York. The invention of Pyrex as a brand is credited, in part, to Jesse Littlejohn, a physicist at Corning Glass, and his wife Bessie. The story goes that Bessie Littlejohn had broken an earthenware baking dish and asked her husband if the temperature-resistant glass he was experimenting with for use in railroad lanterns could be used for baking.

Photo Gallery: A closer look at the pastel pizzazz of Pyrex vintage kitchenware

Turns out it was more than up to that task. According to the Corning Museum of Glass website, Bessie baked cakes and other goods in the glass; the first Pyrex cooking products for consumers were soon introduced in 1915. Early offerings included clear glass pie plates, baking dishes, custard cups, casseroles and loaf pans.

It took more than 15 years for Pyrex to gain widespread use in home kitchens. Credit for that partially goes to scientist and home economist Lucy Maltby, who joined Corning Glass Works in 1929. After establishing a test kitchen, Maltby and her team are said to have had a major influence on new products and designs, which were in turn marketed primarily to women.

The brightly colored, decorated pieces and designs associated with vintage Pyrex debuted after World War II. They were both sturdy and stylish and could go from the refrigerator to the oven (and later the microwave oven), which made them enduringly popular. Bake, serve, store. Literally millions of pieces of more than 150 colored patterns and designs were made at the Corning Glass factory in Charleroi, Pennsylvania, through the late 1980s. Today, the Pyrex brand is owned by World Kitchen. 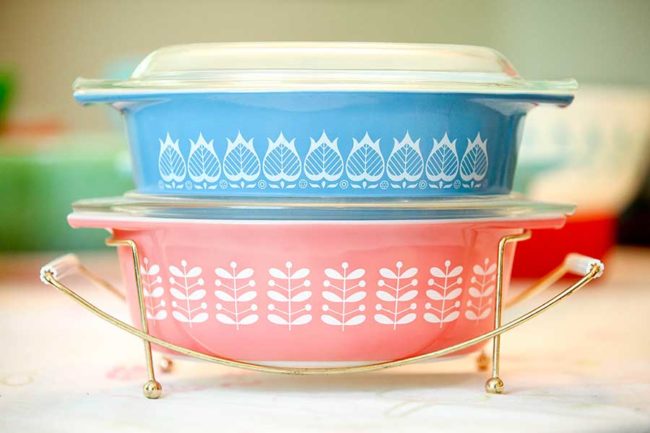 Stephanie Neidl went to college in Elmira and was familiar with Pyrex and its connection to nearby Corning. After a while, her approach to collecting became less random and more purposeful. She read up on patterns, prices and availability and started searching and shopping for specific designs and pieces. Once, she bid on eBay for a casserole she wanted in the blue Dianthus pattern and was outbid by another buyer. That buyer turned out to be her husband, who surprised her with it as a gift.

Happiness is a husband who shares and supports your Pyrex passion. “We’re very sentimental people, Terry and I,” Stephanie Neidl says. “We like that older vintage style. It goes with our house. It’s fun and it’s functional.”

Over the years, Neidl has carved out space for Americana bowls (solid colors with white rims) and cherished pieces in the Gooseberry, Blowing Leaves, Cosmopolitan, Tree of Life, Blue Stripe (“Barcode”), New Holland and Seville patterns, just to name a few. Colors run the spectrum from 1950s pink and turquoise to 1970s avocado, orange and yellow, plus the occasional black or black-and-white pieces.

Bowls, baking dishes, square, round and oval casseroles, fridge dishes, chip and dip sets: Neidl has them all. She’s especially fond of Pyrex bowls with handles that double as spouts. “They’re great for mixing and pouring,” she says. Neidl’s not sure how to best make use of divided dishes, but she has a few of those, too.

And when the Neidls entertain, Pyrex is the life of the party. “It’s easy to get carried away,” Stephanie Neidl says. “At the end of the day I only have so much room in the house. It’s fun to think about the history, too, and imagine how things were used and the people who used them.”

The Hunt for Pyrex Continues

To get an idea of the scope of vintage decorated Pyrex colors, designs, patterns and pieces out there, check out the Pyrex Love website and Facebook page for fans and collectors. Pyrex Passion is another good pattern reference guide, as is the Corning Museum of Glass Pyrex Potluck website.

You can almost always find some vintage Pyrex at thrift stores, flea markets, estate sales and antiques shops — and could hit the mother lode at the following events: