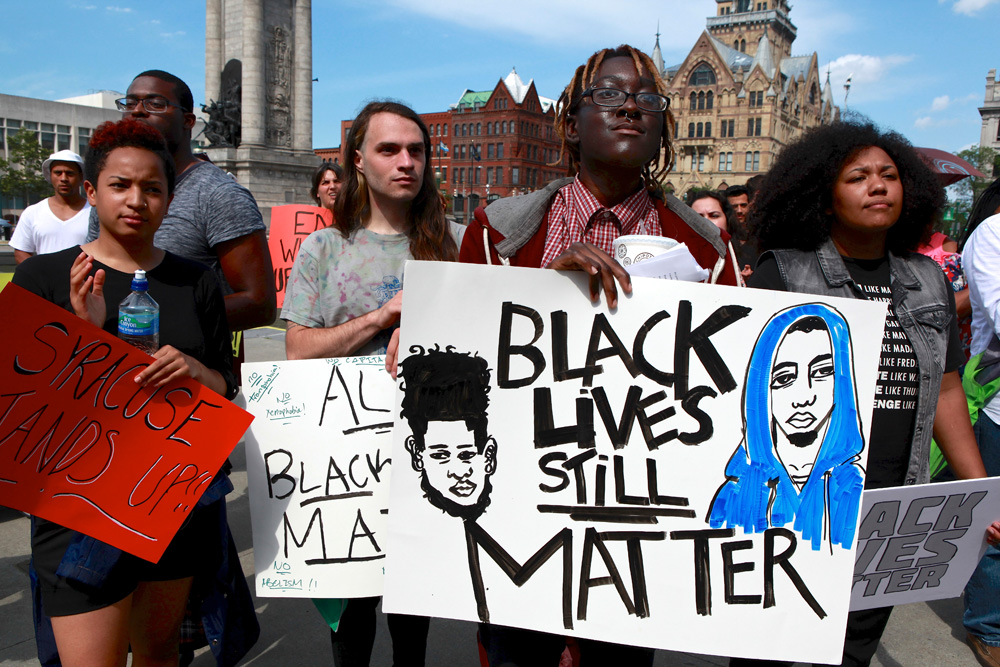 The Black Lives Matter movement takes to the streets of downtown Syracuse.

“I want a more unified America. Bring back innocent until proven guilty,” said Kim Holmes of Syracuse, who was at the Everson Museum plaza for a 9 a.m. demonstration and march to City Hall. “I have a 1-year-old son. I’m praying by the time he’s a man he won’t have to experience what others have.”

She and others expressed their fears or recounted encounters with police during the morning march sponsored by the group Project X and a 4 p.m. event sponsored by Black Lives Matter Syracuse. Each event drew more than 200 people, with some people attending both. Although the crowds were racially diverse and included some veteran activists, the protesters were predominantly young and black.

Shaunna Spivey-Spinner, founder of Project X, noted the group’s diversity. “We’re not all black,” she said. “This is our town. This is what we need. We’ve gotten through slavery, abuse, imprisonment and hate. We’ve been through the everyday struggle of having different-toned skin.”

About three-quarters of the morning group marched to City Hall, where they called on Mayor Stephanie Miner to speak to them. About 15 minutes later, Miner and Police Chief Frank Fowler walked out. Cheers and applause greeted them.

“There is lots of injustice in the world,” Miner said. “We are not immune here in this city or country. In order to seek a more perfect union, we all have to be part of the solution.”

She encouraged people to participate in groups addressing problems they raised and to make appointments to speak with her. Spivey-Spinner responded by requesting a meeting with the mayor.

The afternoon demonstration, which began at the Jerry Rescue monument at Clinton Square, took a slightly stronger, although still peaceful, tone. One speaker noted the significance of the Jerry Rescue, in which escaped slave William “Jerry” Henry was arrested in Syracuse under the Fugitive Slave Act in 1851 and rescued by abolitionists.

“We are here to carry on the work of those who set him free,” said Lovely Keys, one of the speakers. “The fight for freedom is not over.”

The group marched from Water Street to Armory Square, then to City Hall and the Public Safety Building. Few people were on downtown streets, likely because several restaurants and businesses, including a child care center at the Federal Building, closed early.

Still, people in cars waited patiently where streets were closed for the march, and a few people joined the group. Police on duty were pleasant as protesters marched, some of them shouting, “Racist cops have got to go.” Black and blue tape was on the officers’ badges, typically worn to honor fallen police.

Anabel Otts pushed her 2-year-old daughter in a stroller and carried a sign that read, “When my husband gets pulled over, our worst fear is a ticket.” Otts, who also marched with her 9- and 12-year-old children, said the reality of her white family’s relative safety hit her when she heard about Philando Castile, the black man who was shot and killed in his car by a police officer outside St. Paul, Minn.

“I saw the video by his girlfriend and heard her daughter’s voice,” Otts said. “It was a stark reminder that that’s something that will never happen to me.”

In addition to calling for an end to racial profiling and more accountability for police behavior, the group had a specific request. It was collecting signatures on a petition requesting that officials release autopsy results of Gary Porter (also known as Terry Maddox) who was shot and killed on Father’s Day on Syracuse’s Near West Side. The group also calls for an independent investigation of the death.

The march ended at the Public Safety Building, where the group chanted “Black lives matter” and “Hands up, don’t shoot.” As the crowd was leaving, a young woman fell, apparently collapsing in the heat. Two police officers rushed to her side and watched over her until an ambulance arrived.

View Michael Davis’ photos of the marches below: