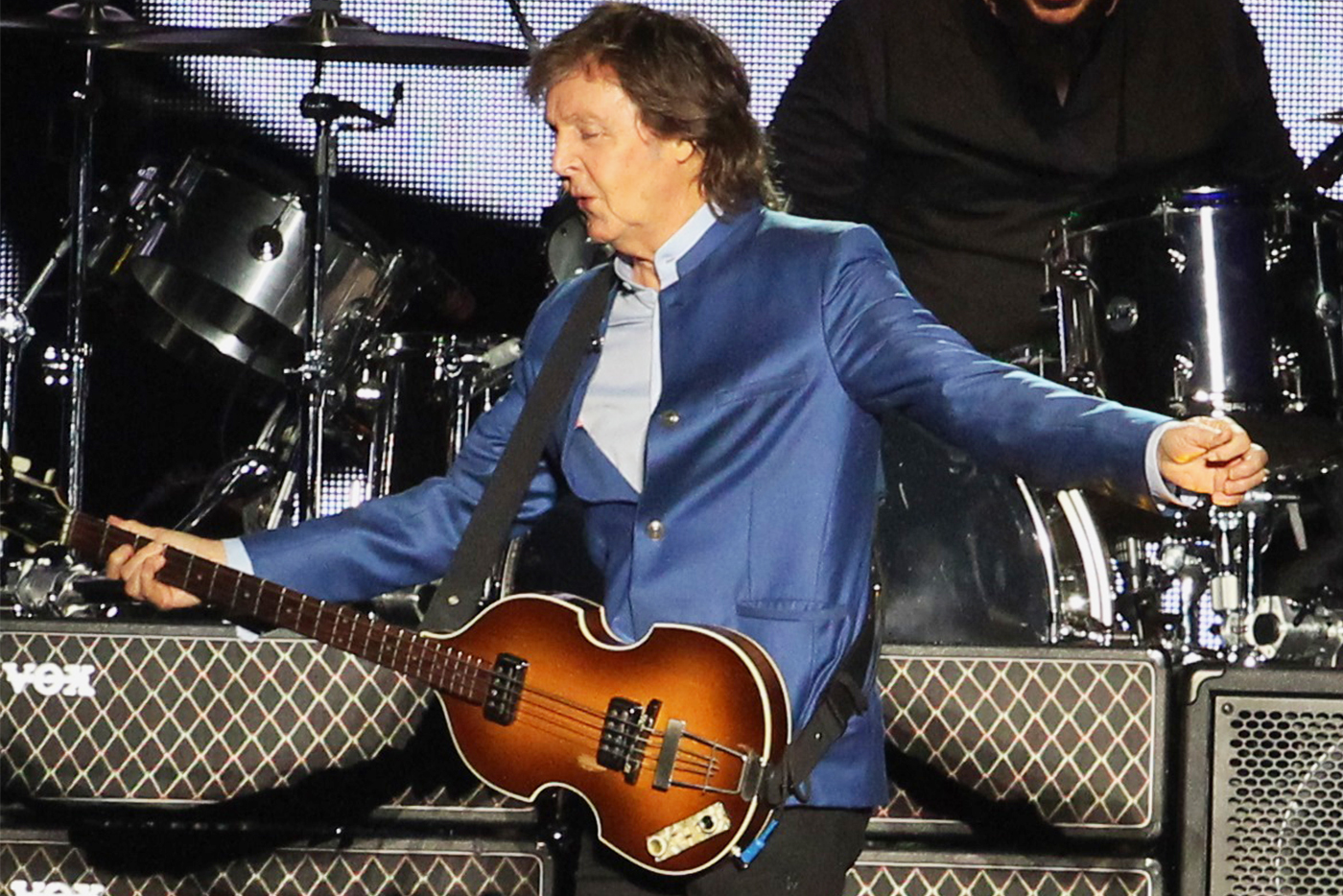 Sir Paul McCartney shut the Dome down with a concert for the ages.

When he was 16, Paul McCartney wrote a song about aging in the style of his father’s jazz band. “When I’m Sixty-Four” later appeared on The Beatles’ Sgt. Pepper’s Lonely Hearts Club Band album and it’s filled with geriatric images of losing his hair, digging the weeds and bouncing grandchildren on his knee.

There was no mention in the song of turning 75 and screaming through a blistering “Helter Skelter,” making eyes water with a heartfelt tribute to John Lennon, or nearly burning the Carrier Dome down with the pyrotechnics from “Live And Let Die.”

But Sir Paul did all that and much more Sept. 23, about three months after his 75th birthday. For those Central New Yorkers who had tickets to McCartney’s cancelled 1993 show at Syracuse University’s Carrier Dome, the Sept. 23 concert was worth the 24-year wait. And for fans of The Beatles and Wings who had never seen McCartney perform live, it was the thrill of a lifetime.

McCartney’s three-hour show before a sold-out crowd of about 35,000 featured 39 songs and numerous stories and one-liners. The Dome was electric: Imagine the roar from John Gillon’s buzzer-beater against Duke last February and multiply by 39.

Speaking of Syracuse basketball, McCartney said he was familiar with the Dome from “watching a lot of basketball matches (sic) in this place.” Orange coach Jim Boeheim — the second most famous person at the Dome Sept. 23 — tweeted, “McCartney Magic in our Dome! He can play on Boeheim court whenever he wants.”

Those Dome renovations that are in the works nearly happened a lot sooner as fireworks during “Live And Let Die” reached a catwalk above the stage and started a small fire. But as McCartney played the next song, “Hey Jude,” a Dome worker or concert roadie climbed to the top to extinguish the fire before the final “Nah, nah, nah, nah, nah, nah, nah, nah.” With McCartney’s 55 years of hit songs with The Beatles, Wings and as a solo artist, it was a slam dunk that he would entertain the crowd. But McCartney dropped jaws at the muggy Dome with his energy, stamina and his wondrous talent as he deftly maneuvered from one instrument to the next, playing a dead-on electric guitar solo on “Foxy Lady” (following “Let Me Roll It”) to a rollicking piano on “Lady Madonna” to his legendary Hofner bass on a swinging “Back In The USSR.”

And through it all, McCartney did not take one sip of water on stage. This writer will speak for himself, but I’ll be happy if I can go three hours without having to go to the bathroom if I get to 75.

The magic of a McCartney concert lies in the range and variety of his music. One minute, you feel like he’s playing “Blackbird” just for you in his living room; the next minute you’re singing “Hey Jude” along with 35,000 of your closest friends.

Forever the cute Beatle, Paul truly appears to be having as much fun as you. Some examples:

When talking about the signs in the crowd and how he can’t help but read them even though he’s trying to remember the words and chords to the song he’s playing, McCartney read a few from the crowd, including one that said, “Sign My Butt.”

“Well,” McCartney said with a smile, “Let’s have a look at it then.”

When talking about the first record The Quarrymen ever made, McCartney said they each paid one English pound and the deal was that Paul, John, George Harrison, Colin Hanton and John “Duff” Lowe would each hold it for one week. “John had it for a week and gave it to me, I gave it to George, George gave it to Colin and Colin gave it Duff — and Duff had it for 20 years,” McCartney said.

During the guitar solo in “And I Love Her,” McCartney turned around and playfully wiggled his butt as the crowd laughed and cheered.

Throughout the show, McCartney played tributes to his first wife, Linda (“Maybe I’m Amazed”), his current wife, Nancy (“My Valentine”), Beatles producer George Martin (“Love Me Do”), George Harrison (“Something” that he started on a ukulele that George gave to Paul), and Lennon (“Here Today”).

“Here Today” was recorded after Lennon was murdered and it’s written in the form of a conversation that they never had a chance to have. McCartney told the audience that they shouldn’t wait if they want to say something nice to someone. “If you want it said,” McCartney said, “get it said.”

McCartney also honored Lennon by playing a song he has done only occasionally on this “One On One” tour, “A Day In The Life.” He turned it into a medley with “Give Peace A Chance,” and you’d like to think that somewhere John was smiling as the crowd sang along and waved peace signs.

From that point, McCartney and his band — Paul “Wix” Wickens (keyboards), Brian Ray (bass/guitar), Rusty Anderson (guitar) and Abe Laboriel Jr. (drums) — closed the show with several classics that kept the crowd on its feet: “Ob-La-Di Ob-La-Da,” “Band On The Run,” “Back In The USSR,” “Let It Be,” “Live And Let Die” and “Hey Jude.”

The encore started with “Yesterday,” “Sgt. Pepper’s Lonely Hearts Club Band (Reprise)” and “Helter Skelter.” McCartney usually pulls a fan or two on stage during the encore, and at that point he invited an 18-year-old girl named Jessie to join him on stage.

Jessie was holding a sign that read, “Just Turned 18 If You Know What I Mean,” and McCartney laughed and said, “Yeah, I know what you mean.” Jessie explained that she had recently spent some time in the hospital and was inspired by a framed picture of McCartney pointing at her that she had taken at a concert a few years ago.

“You were the reason I got out of bed every day,” she said.

McCartney gave her a big hug and signed her arm before launching into “Birthday” and then closing with the “Golden Slumbers/Carry That Weight/The End” from the Abbey Road medley.

With that, McCartney ended the show with one of the most famous lines in rock history. And at 75 and counting, McCartney is living proof that the love you take truly is equal to the love you make.[snt]