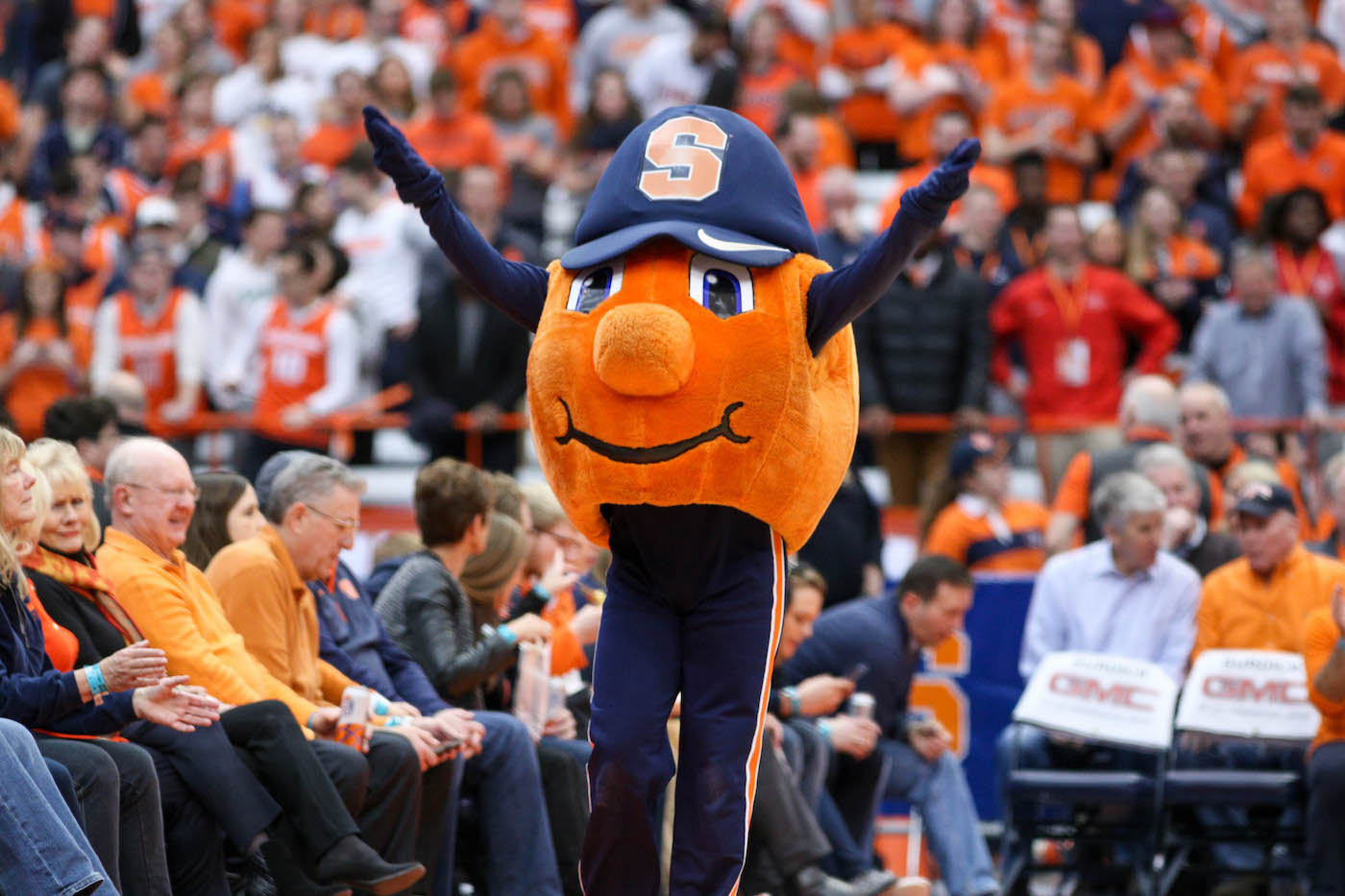 Being selected to be one of several students in the Otto the Orange suit is to be invited into a secret, anonymous society.

On a dark, bitterly cold morning, a few figures, some dressed only in shorts and T-shirts, race through wind-whipped snow from the parking lot into the Manley Field House. Their sunny demeanors defy the hour and conditions. That’s true even of one young woman who is barking like a seal.

“I’m not sick,” comes the cheerful but defiant reply.

“You have a cough, your chest hurts and you can’t breathe,” Julie persists. “You need some rest.”

“I will on spring break,” the beaming undergrad promises, her smile as big as, well, Otto’s.

And with that the workout begins: an hour of running, weight work and Otto-specific exercises such as “The Speed-skater” that keep the hips strong and loose. You can’t be a good Otto without good hips.

This is Otto Boot Camp, a clandestine, thrice-weekly conditioning regimen designed for the covert squad authorized to appear in public in SU’s signature citrus suit. Nope, Otto is not a real orange, as so many of us believed.

In fact, with upward of 500 appearances per year, mascot duties must be shared. At any one time, the team consists of approximately 10 students selected through a process so mysterious even they don’t know how it works.

“It was surreal,” senior Isaac Clark, a retiring Otto, recalled of his recruitment. “I received a Facebook message from Otto saying, ‘Otto wants to talk to you.’” All Isaac would reveal about the vetting process is that it is lengthy, rigorous and secretive, aimed at protecting one of the most identifiable brands in sports: the only fruit mascot in collegiate athletics. Vegetables — such as the Delta State Fighting Okra and Scottsdale Community College’s Artie the Artichoke — abound.

Recruits who make the cut take an oath of near anonymity. Each team member is allowed to tell only five people about his or her double life. “We have people who won’t tell their roommates what they do.” Isaac said.

Isaac was allowed to use his name for this story because he was “unveiled” for his Otto work at a tribute on Senior Day, March 4, during the final regular season men’s basketball game of the year. It was one of the rare exceptions the program makes to its code of anonymity. The team contains a mix of personalities (and genders), but similar builds are required so no one Otto stands out. A height in the neighborhood of 5 feet 10 inches is desired. Stunts, dances, gestures and general movement are all practiced and routinized. Maintaining consistency keeps Otto believable.

As with any team, there is division of labor. The Ottos take turns attending birthday parties and weddings (Otto charges $100 to $300 for private functions), corporate events, school visits and myriad athletic contests.

Because it might kill the magic, Otto must never be in two places at the same time. That means if there’s a tennis match and a rowing event happening simultaneously, he will split his time at the two venues.

All that running around inside a heat-trapping fuzzball can leave the orange costume a bit juicy, so the team devotes considerable time to keeping Otto hygienic. The Otto suit itself is too delicate for the washing machine, so it must be regularly disinfected. Accessory garments get laundered by the student-orangelettes.

“They share a lot of the clothes,” Julie said.

The workouts are all about bonding as well. While Otto the character is mute, the kids who inhabit him are anything but. They chat, joke and laugh, but there’s an undercurrent of seriousness to the rind grind.

While working a game, the 15-pound suit can feel heavier with each passing hour. The constant cavorting squeezes energy out of the legs and all that waving stresses the shoulders.

Team Otto’s designated trainer, Veronica Tearney, uses a well-rounded approach to fitness: “They get hit with a lot of variety — just not as much volume as other sports get. We want them to be used to working in a fatigued state.”

During the Thursday-morning workout, the suitless Ottos move from station to station, pushing weights, high-stepping through a metal agility trainer and swinging weighty ropes. On cardio day, which is Friday, Veronica might have them running the stairs of Manley Field House lugging medicine balls, among other feats. And don’t let that goofy grin fool you: Otto has to be mentally tough as well. Throw a big orange icon into a crowd, especially when alcohol is served, and there’s always the potential for things to turn sour.

Team members are trained to spot potential “situations” and peel away without speaking or otherwise breaking character. Additionally, each Otto is supervised by a handler who can speak for Otto as needed.

Of course, all the toil bears fruit. Team members travel to tournaments and postseason games. Last year, Otto frolicked with other mascots from the ACC in Washington, D.C., during the conference men’s basketball tournament. Among the many promotional events there: a mascot kickball game on The Mall. When there’s time, the team competes in officially sanctioned national mascot competitions.

“We always do well,” said Julie, a former Otto herself who also has the title of director of student engagement.

Because the Otto costume is gender-neutral and lacking even a trace of menace — one reason Otto isn’t every fan’s cup of orange pekoe — the program attracts a higher percentage of females than many mascot programs nationwide. Four of the seven participants at the workout attended by the Syracuse New Times were women. In other words, the next Otto you see might be an Otta, but either way the human inside is no doubt juiced to be there.

Wearers of the nation’s most recognizable Orange may not be allowed to reveal their true identities or to speak while in character. Yet they can see a child’s eyes light up as they approach or an alum transported back to college days by the sight of the whimsical dancing orb.

For that kind of magic — and branding — anonymity is a small price to pay, even if it means having to tell your roommate you were at the library when you were really at the Carrier Dome strutting and bouncing in front of 33,000 fans.

“It’s not about us, it’s about Otto,” Isaac said. “Otto is the living embodiment of Syracuse University. It’s not me in the suit.”